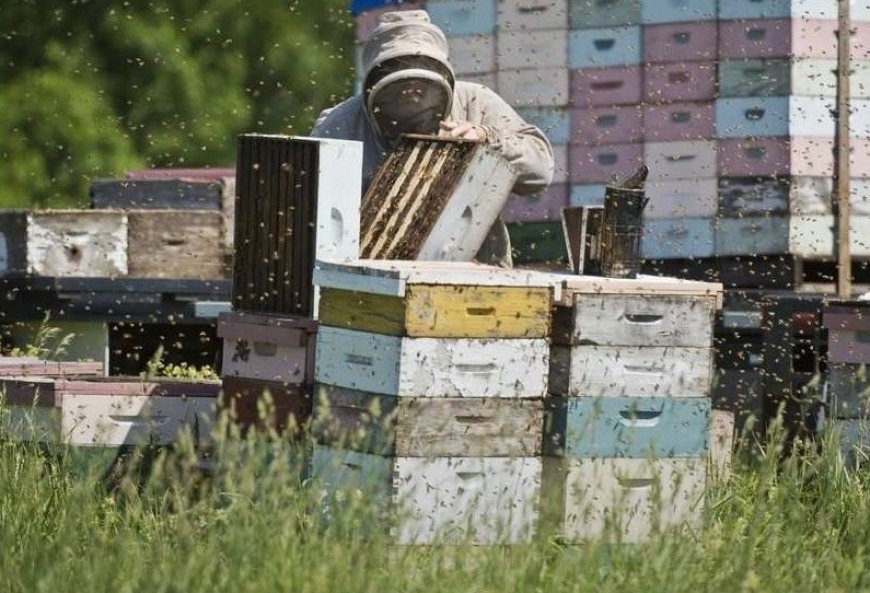 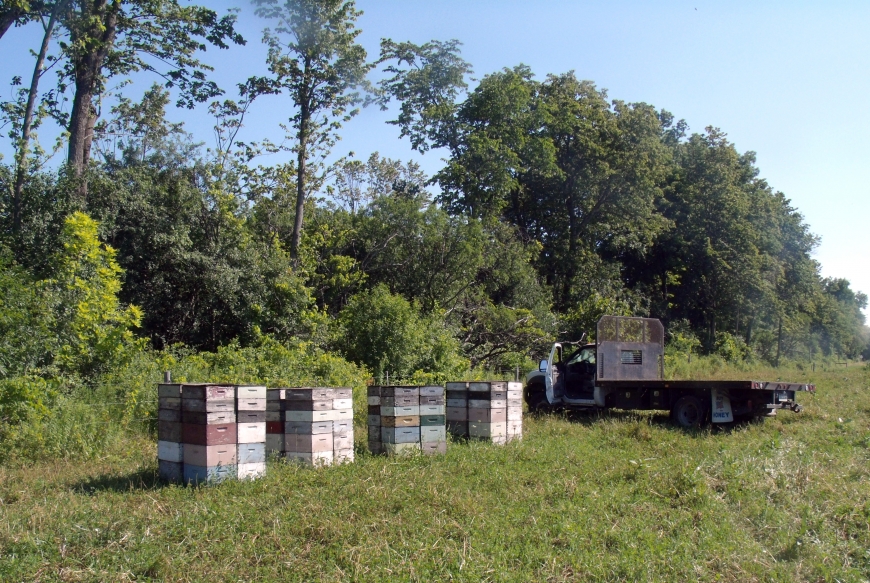 A few of Mark's beehives (Photo submitted by Mark Berninghausen)

Mark Berninghausen owns Squeak Creek Apiaries in Brasher Falls, where he raises bees for their pollination services and produces honey. We had the opportunity to talk to him about bee keeping in the North Country.

Nature Up North: How would you describe your perfect day in the North Country?

Mark Berninghausen: When I'm not packaging and delivering honey to stores, I’m working with my bees outdoors. A perfect day in the North Country would be sometime in June or July when it's nice and sunny, but not too hot, with plenty of blue sky and some cloud cover. There's a nectar flow, so all the bees are coming and going from their hives. I can do whatever I need to do quite comfortably without getting stung very often at all.

NUN: Tell us about what you do.

MB: Part of the income comes from pollination service. I take my beehives to apple orchards over in the Champlain Valley.  [For example] I'll take 300 hives to a blueberry grower in North Carolina, and they’ll stay there for about six weeks to pollinate his blueberries... Pollination is a good percentage of my income. The rest of it is honey production and sales. I bottle and sell honey across the North Country.

NUN: How does the honey-making process work?

MB: Honey bees go to flowers, and they suck the nectar out. They take that nectar back to the beehive, and pass it back and forth between bees. When they do that, enzymes in the bees' mouth are added to the nectar, and it starts to cure... Many people think that honey comes from the pollen, but the pollen is the protein that bees consume.

NUN: How long does that take?

MB: I'm not sure how long it takes the bees to change nectar into honey. As beekeepers, we talk about nectar flows. You'll see a lot of activity where the bees are going out to the flowering plants, bringing nectar and pollen back to the hive. If they start gathering nectar in the North Country, say in May or late April, the first honey harvesting happens in July or early August...

[Honeycombs are] six-sided cells... the bees fill them up with honey, and then coat the surface with a film of wax, which keeps the honey in the cells. When I see enough of that in a hive, I think, "I'd better start taking this off so they can store more.” As soon as I take it off, it really takes only a few days to get that honey extracted from the comb by mechanical processes... From harvest to bottling, it really doesn't take very long at all, a week. Usually, I stockpile enough honey in one year that by the time it's time to extract the next year, I still have honey left over very from the previous year, so that I never run out.

I like people to understand that what’s in the jar came from my hives.

NUN: How did you get into the work?

MB: There's always been at least a bit of an attraction to the bees themselves. When my wife and I got married, a friend of mine collected a swarm of bees out of an apple tree and I thought that was really fascinating. Soon after that we bought one beehive, but it didn't last very long. I got introduced to bees again when my wife and I moved to Williamsburg, Virginia. My wife and I were going to move to the country, and we wanted to take some self-sufficiency skills with us. So I got a two-year degree in commercial beekeeping from Ohio State University's Agricultural Technical Institute.

When we moved here to the North Country, I brought 12 hives with me from Ohio, and I got a job as an Apiary inspector with New York State Department of Agriculture and Markets. I did that for 20 seasons. All the time I was building my own bee business, and things grew from there...I bought my first hive in 1976. But on the side of my van, it will say "Squeak Creek Apiaries since 1988," which was the year my daughter was born. It was the year that we moved to where we live now...

NUN: Are there many other beekeepers in the North Country?

MB: There are only a couple who have more than 100 hives, but there are quite a few people that have one and two, maybe three or four. There is a group that meets the last Wednesday of each month. That's been going on for maybe about five years. It seems like there's a growth in interest around St. Lawrence County.

NUN: How many hives do you have?

MB: Right now, it's probably around 250 and I try to have between 500 and 600. I do most of the work by myself, but I do need to have that much honey production in order to keep the bills paid. Last year I had quite a bit of die off, so this year is going to be a building year...

NUN: Why do you take your bees to South Carolina?

MB: I go to South Carolina about three times a year. I followed the example of friends who had been taking their bees to South Carolina for many years. South Carolina has an earlier spring than New York by as much as a month or more, and a relatively mild winter. I can replace my losses more easily than I could if I kept them here in New York...

NUN: Do you notice changes in your honey from season to season or year to year?

MB: I do notice differences from year to year in what the honey is like. I have 12 or 14 different locations here where I put my beehives just in St. Lawrence County. That probably has more to do with the floral source than anything...

A beekeeper that knows his area and pays attention can tell by taste and color what the major floral source of that honey was... If people like the late summer crop more than the early, I'll take three buckets of early honey, and mix it with one bucket of late honey. So it's [usually] a blend anyway.

I don't know what to think anymore. There definitely has been a shift in when spring occurs. It just feels like things are less predictable.

NUN: How does the weather and the climate impact the work that you do?

MB: I wish somebody would tell me. Since I've been taking bees to South Carolina and doing apple pollination in the Champlain Valley, I could almost always count on leaving home and getting to South Carolina on March 15th. On April 30th, or May 1st, I would load my hives on the truck and bring them north. A couple weeks later, it would be time to put them in the apple orchards. I don't know what to think anymore. There definitely has been a shift in when spring occurs. It just feels like things are less predictable... When I first started doing pollination I thought, "Well this is nice, we can count on that.” Now they call me up and say, "We need to spray tomorrow, you need to come get your bees." So that's something I have to be prepared for.

NUN: How do you feel your lifestyle connects you to the environment?

MB: Well, I work outdoors. I don't depend on the weather channel as much as I get up and I look out the window.  The best day for moving bees from one location to another is on a cool and rainy day. I might get wet, but the bees are calm. They're in the hives, not flying around. It's a lot easier to work with them.

NUN: What do you enjoy most about beekeeping?

MB: Freedom. Within the constraints of getting the work done that I need to get done, doing what I do affords me a certain amount of freedom.  This is what I choose to do, and what I get out of it depends on what I put into it. I don't have to punch anybody else's time clock. I say I don’t do recreation, but I do like being outdoors.

This interview was edited by Stephanie Muldrew. It was originally recorded by SLU students Dan Pollis & Greta Massey in 2017 as part of a "Changing Lands, Living Traditions", a journalistic collaboration between a SLU Environmental Communications course, Nature Up North, and TAUNY (Traditonal Arts of Upstate New York). 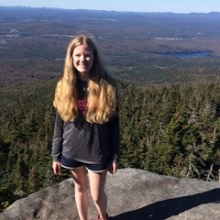 Stephanie Muldrew, originally from western Massachusetts, is a senior Environmental and Global Studies major at St. Lawrence and a digital media intern at Nature Up North. She finds happiness simply being outside, and loves running on the trails around campus, hiking in the Adirondacks, learning about local flora and fauna, and sharing her love for nature with kids.

Great to learn more about…

Great to learn more about what Mark does! Love the honey!