An invasive species is an organism that has spread outside its native range and is believed to be disruptive or harmful to the environment or to human health.

You may be familiar with emerald ash borer, the Asian wood-boring beetle that has consumed millions of native ash trees across the United States in recent years. Wild parsnip is a toxic relative of queen anne's lace that now dominates many roadsides across the North Country.  In addition to pushing out native shrubs and wildflowers, reactions between the plant's sap and sunlight causes chemical burns on human skin.  Both examples of species are classified as invasive here in New York state.

Despite hard work to remove these species from the environments they threaten, many, such as wild parsnip and emerald ash borer, continue to spread at alarming and nearly uncontrollable rates. Nature Up North is working to increase awareness of, and participation in, efforts to control invasive species present in the North Country. Visit the below projects to learn how you can make a difference.

Confirmed in St. Lawrence and Franklin Counties in 2017, emerald ash borer (Agrilus planipennis) threatens to wipe out native ash trees across the region within a few years. In collaboration with the St. Lawrence County Emerald Ash Borer Task Force, Nature Up North launched the Community Ash Tree Survey in fall 2017 to begin a census of ash in communities across the North Country.

Garlic mustard (Alliaria peteolata), an invasive weed native to Europe and North Africa, has penetrated mature forests across the region in recent years. Each spring, Nature Up North and Traditional Arts of Upstate New York (TAUNY) cosponsor a Garlic Mustard Pull and Pesto Workshop. Each year, we visit a public location and spend several hours removing garlic mustard from a public park or trail, after which we convene at the TAUNY kitchen to make a spicy homemade pesto from the invasive, yet edible, herb. Learn more. 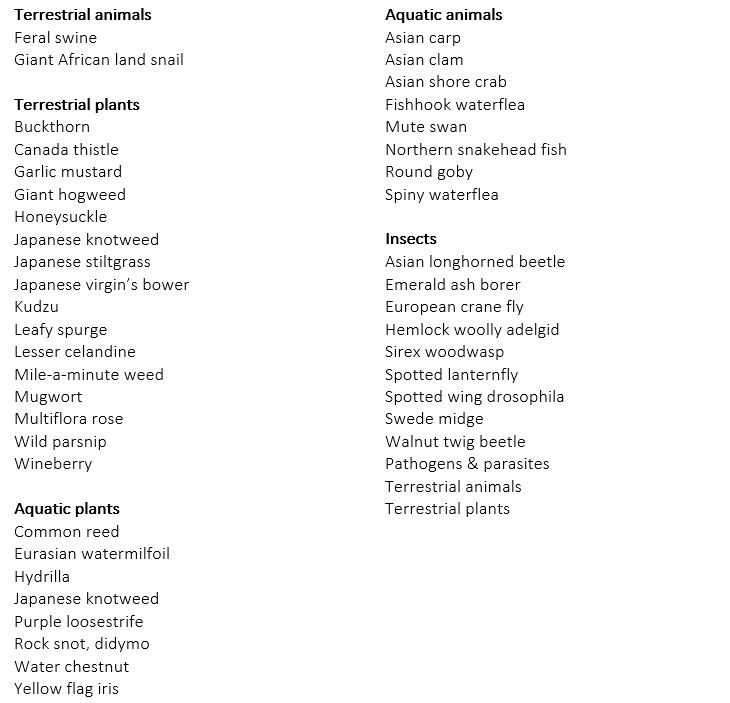