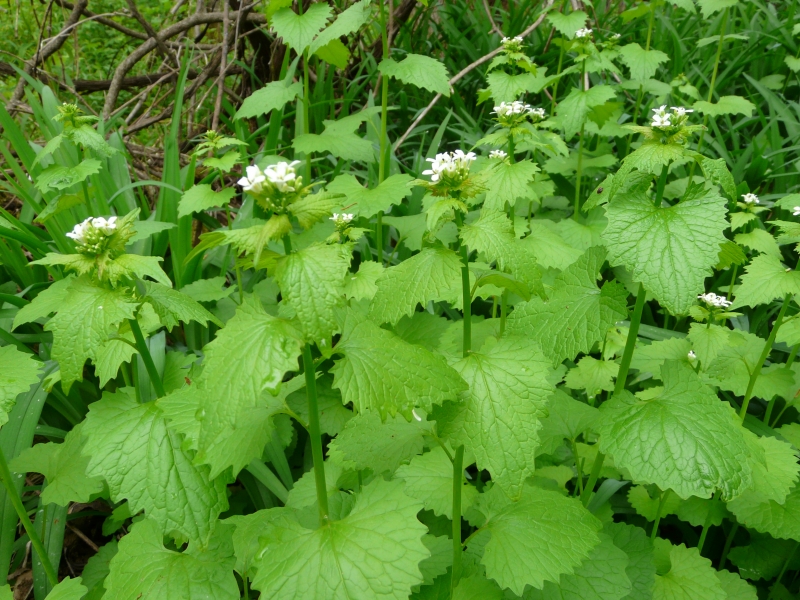 While any new green growth tends to catch my eye after a long winter, some signs of spring are less welcome than others. Over the past several years I’ve noticed an increasing occurrence of garlic mustard (Alliaria peteolata), an invasive weed native to Europe and North Africa, cropping up around the North Country each spring. True to its name, garlic mustard is in the mustard (Brassicaceae) family, and its leaves, stems, and roots have a potent garlic-horseradish flavor. Originally imported from Europe as a medicinal and edible herb, garlic mustard was first recognized growing in the wild on Long Island in 1868. Since then, it has spread across the North American landscape at a rate of 4,000 mi2 per year1. Garlic mustard is unique for its ability to invade mature, relatively undisturbed forests, where it is capable of outcompeting native tree seedlings and woodland wildflowers. Because it spreads rapidly, threatens native species, and is extremely difficult to remove once established, it is illegal to sell, import, purchase, or knowingly transport  garlic mustard in New York State.

Garlic mustard is a biennial plant species, meaning it completes its life cycle in two years.  In the first year, garlic mustard plants germinate in spring and grow in a circular cluster of heart-shaped leaves 3-6 inches high.  Plants will overwinter under the snow, and then shoot up in March or early April, growing a flowering stalk at a rate of up to 1.9cm per day2. Because garlic mustard leaves do not die back in the winter, they can get a jump start on native perennial plants that sprout from the root stock. When fully mature, garlic mustard plants can be up to three feet tall. Flowers develop in late spring of the second year, followed by seed pods called siliques. The plants die by late June, completing their life cycle. Garlic mustard possesses a variety of characteristics that make it a particularly pernicious, and successful, invasive species3. To start, garlic mustard plants exude chemical compounds into the soil that make it inhospitable to many native forest plants. These compounds disrupt native plants’ interactions with mychorrizal fungi, which help them absorb nutrients from the soil4.  Put another way: garlic mustard effectively cuts tree seedlings off from their food supply. This strategy, called allelopathy, inhibits the growth of plants that would otherwise compete with garlic mustard for water, sunlight, and nutrients. Its ability to alter the chemical composition of the soil, and thrive in low-light conditions, may help explain how garlic mustard is capable of invading even pristine, undisturbed forests5.

Another factor contributing to the success of garlic mustard is its relative lack of herbivores and competitors in North America compared with its native range. While at least 69 species of insects feed on garlic mustard in Europe6, few enjoy its spicy kick here. Even generalist white-tailed deer tend to avoid it.

Garlic mustard also reproduces prolifically. A single plant can produce as many as 3,762 seeds, and seed densities as high as 107,580 seeds per square meter have been recorded7. Compare this to native species such as white trillium (Trillium grandiflorum), which grow slowly and produce only 60 seeds per plant. Garlic mustard seeds remain viable in the seed bank for five to ten years. As a result, controlling a patch of garlic mustard is a long-term project: it requires up to a decade of removal efforts, and every single plant must be removed in order to prevent its spread.

Garlic mustard plants can be controlled by pulling, but the plant and at least one half of the root must be removed in order to keep it from re-sprouting. Fortunately for us, it is relatively easy, and satisfying, to yank the entire plant (roots included) from the ground. Timing is crucial. You will want to pull the plants before they have released their seeds for the year (in the North Country, this occurs usually between late May and mid-June). Proper disposal is required: the seeds stay viable even after you have pulled the plant. Collect plants in a thick black garbage bag and leave in the sun for up to a month. This will ensure the plants have fully died before you dispose of them. Never leave plants in piles on the ground or add them to compost, where they may be able to re-sprout. Chemical applications can also be used, but are inadvisable due to their effects on non-target plant species. It is recommended that you clean your shoes and tools immediately upon leaving a garlic mustard infested patch, so that you do no inadvertently spread seeds to new areas. For more on garlic mustard control, see here and here. While few North American herbivores want anything to do with garlic mustard, some humans enjoy it as an addition to sauces, salads, sautés, and pesto.  Garlic mustard is among the most nutritious greens ever studied (wild or cultivated), with high levels of vitamins A and C, zinc, carotenoids, and fiber8. That said, I’ve found that the leaves of both first and second-year plants can be quite bitter. You’ll likely want to use garlic mustard as compliment to other greens, rather than the centerpiece of a meal. Boiling the leaves or marinating them in apple cider vinegar and honey can help reduce bitterness. For pesto, you’ll likely want to supplement with at least equal parts basil. Another foolproof rule for garlic mustard pesto: when in doubt, add more olive oil and cheese.

For more garlic mustard recipes, check out From Pest to Pesto, a collection compiled by the Potomac Highlands Cooperative Weed and Pest Management Area. For more information on other edible invasive species, check out eattheinvaders.org.

IMPORTANT NOTE: Garlic mustard, like many species in the Brassicaceae family, contains trace levels of cyanide9.  Researchers have found that concentrations in first year plants are high enough to be toxic to some vertebrates. Cyanide containing compounds in garlic mustard are part of its chemical defenses against herbivory, and concentrations tend to be higher in first-year plants than second-year plants. The compounds do not stand up to heat: cooking or blanching the leaves greatly reduces or eliminates the cyanide-containing compounds in garlic mustard. It is important to be certain that you’ve positively identified garlic mustard, and to exercise caution when consuming any wild foods. Avoid eating plants growing near roads or areas that may have been treated with herbicides. 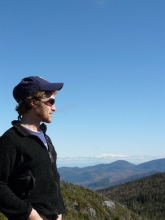 Jacob Malcomb, Project Manager of Nature Up North 2013-2016, is an avid runner and mountain biker. He also enjoys playing guitar, attempting to stay upright on skis, and getting out on North Country waterways. He hopes to see you out on the trail.