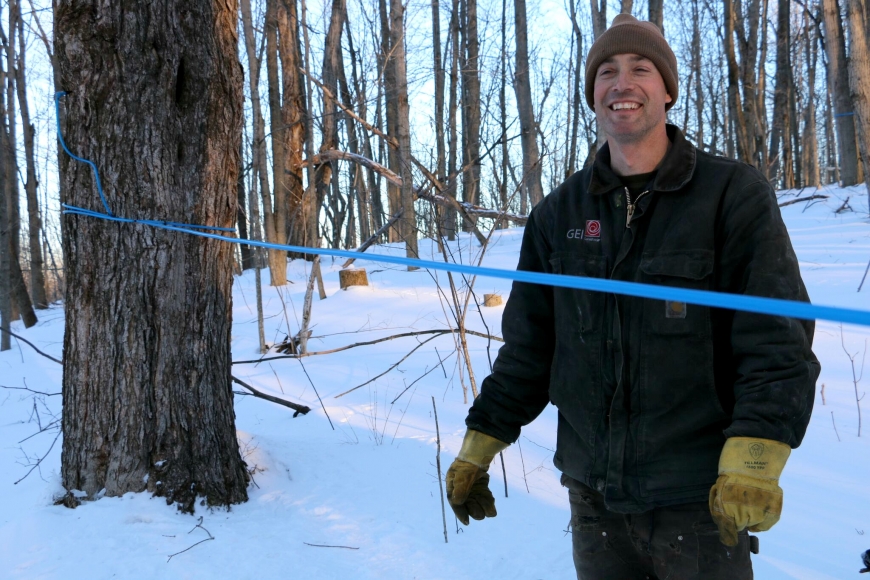 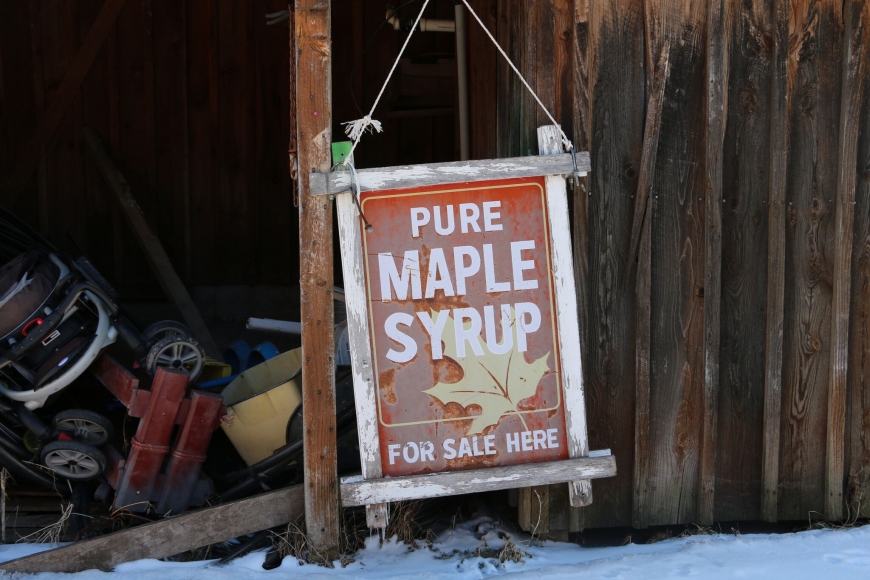 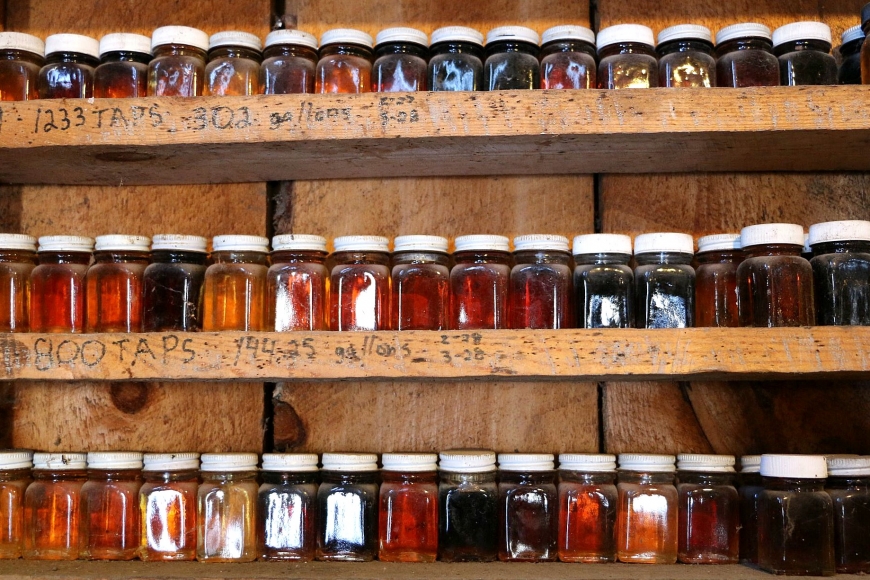 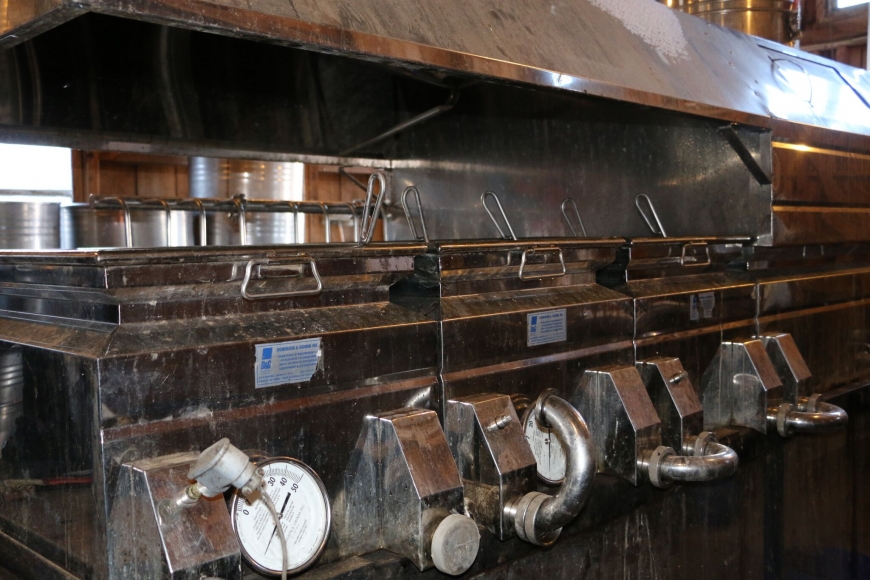 Andy Hurlbut at Hurlbut's Maple Farm. They use a tubing system to draw sap from the trees.

Hurlbut's Maple, started in 1995, markets maple syrup in New York State and beyond.

Finished syrup comes in many colors.

This evaporator is used to boil the sap down to syrup.

Owned and operated by Andy and Elisha Hurlbut, Hurlbut’s Maple has been producing local Maple products since 1995. Andy Hurlbut first started tapping trees in high school, working and learning from his father and grandfather. Alongside their maple sugaring operation, the Hurlbuts also grow several acres of corn, beans, and hay and raise grass-fed beef.

Nature Up North: Describe your perfect day in the North Country.

Andy Hurlbut: Oh boy, perfect day. I like the fall the best I guess when it’s 35-40 degrees and the leaves are changing, not a hot weather person.  Winter is kinda too cold but, those fall days, when the sun is shining and air is cool, I like that time of year.

NUN: Tell us what you do here on the property.

AH: We farm about 2,000 acres of different crops, we basically make maple syrup during the winter and early spring.  We grow about 500 acres of corn, for grain mostly, probably about 300-400 acres of soybeans for grain, we produce quite a bit of hay for the horse market and that’s pretty much what we do.  We’re basically crop farmers; we have a few beef animals but mostly crops.

You have to have cooler nights, freezing nights, and kind of warmer days...that’s when sap runs.

NUN: Can you describe the sugaring process?

AH: You basically make maple syrup out of maple trees, the sap is produced from generally mid-February to maybe the mid-April time of year, somewhere in that time frame... you have to have cooler nights, freezing nights, and kind of warmer days. Usually that transition lasts for a month or two. That’s when sap runs. We basically collect that sap and then we concentrate it into maple syrup, which is what everybody uses.

NUN: How did you get into this work?

I started [sugaring] when I was in high school. This was my grandparents farm.

NUN: Can you take us through a typical day for you guys?

AH: Generally, depending on what the temperature is, we use a vacuum to pull the sap out of the trees. We spend maybe three or four hours a day just checking the tubing system making sure we have good vacuum. We collect our sap up from the day maybe at 3:00 pm and then hopefully by 5:00 or 6:00 pm, we’ll start boiling that sap and we get done say, 8/9 o’clock pm.

NUN: You were explaining the process of sugaring, there’s 2% sugar and then you have to add it to make about 68%, can you explain that?

AH: So the raw tree sap has 1-3% sugar content depending on the day, the time of year, and the trees. We need to concentrate that down to 68%. I think it’s 68% I might be wrong there on my numbers but somewhere around 68% sugar. We take the raw sap, we run it through a reverse osmosis machine which is basically an electric motor, and a high pressure pump and it forces it through a membrane. There it separates out a lot of the water. The machine will take it from 1% or 2% sugar content to maybe 15% or 16% sugar and then we put it through the evaporator, which uses oil to boil it and concentrate it from that 6%, 8%, or 16% sugar up to about 68%. Finally, we filter it through the filter press which removes any impurities.

NUN: Has the taste evolved or changed in comparison to prior years?

AH: I haven’t really noticed that it has, people are boiling the sap less, using more technology -- I think that may affect it a little bit. It may not have the same maple flavor that it did when they used to boil with wood-fired evaporators and had some of that smoke flavor get into the syrup. I think if you process it the same as you do today, it will taste very similar.

We like to try to do the best we can with the natural resources we have.

NUN: What do you enjoy most about sugaring?

AH: We like the lifestyle. We’re farmers so naturally we’re outside a lot of the time.  We like to try to do the best we can with the natural resources we have. There’s not really one thing I enjoy the most— I enjoy that process.

This interview was originally recorded by Kayla Schmalz and Megan Lighthall.