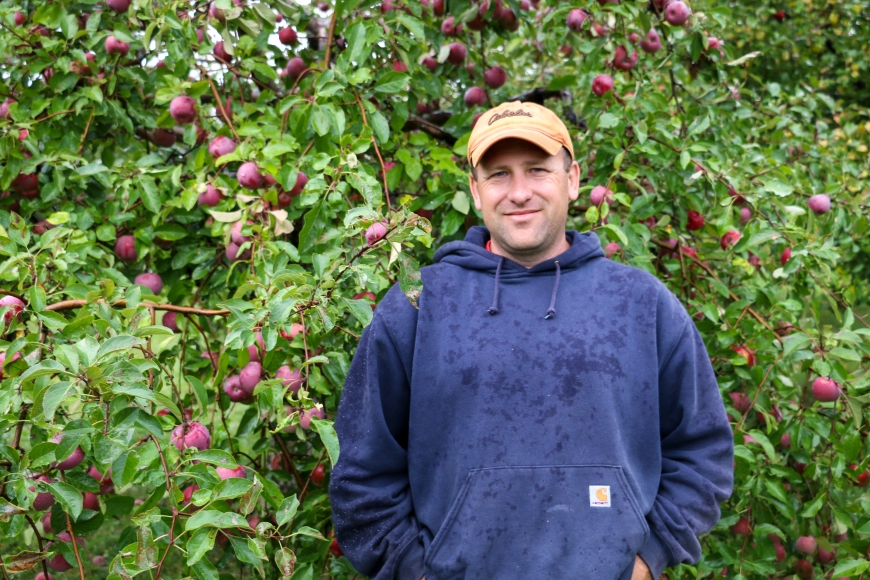 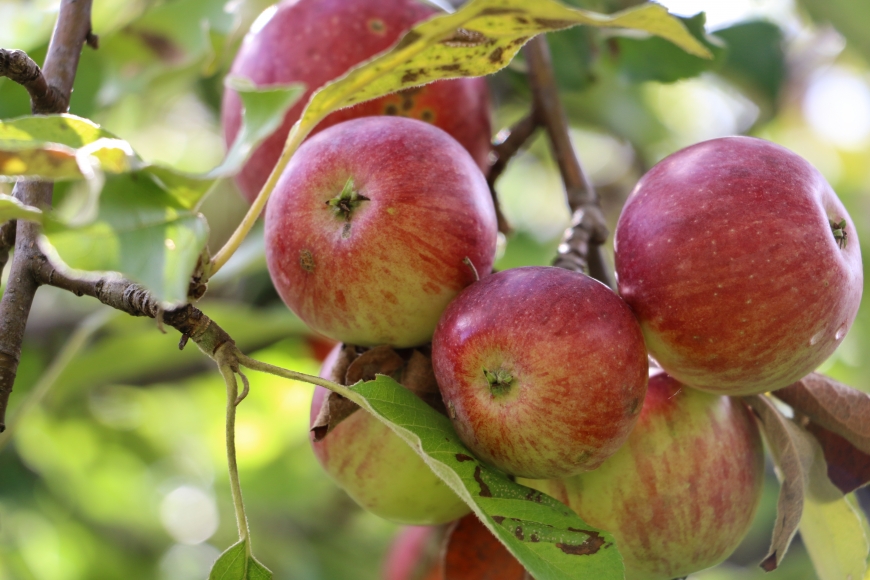 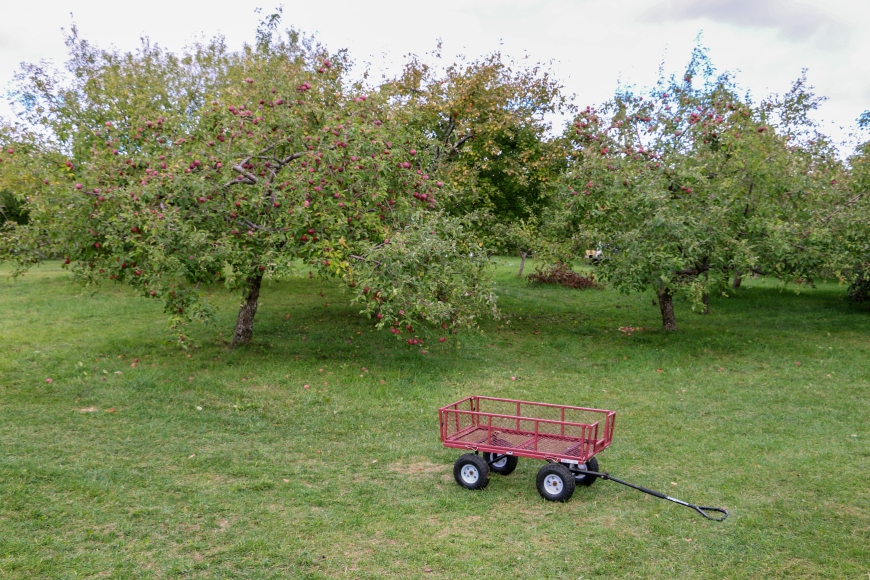 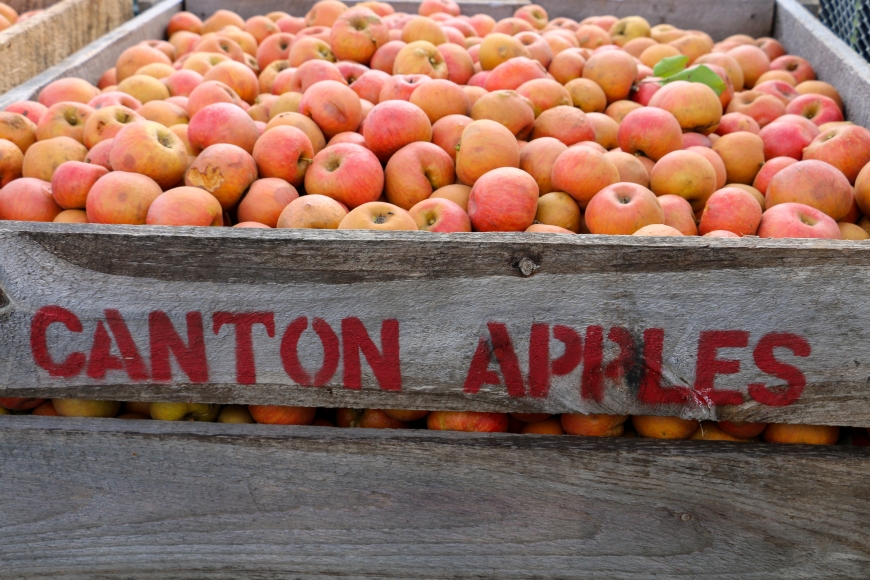 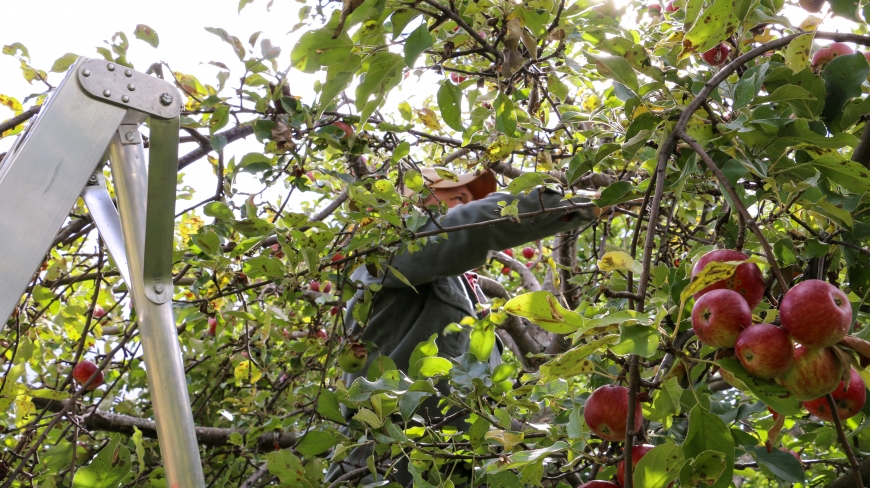 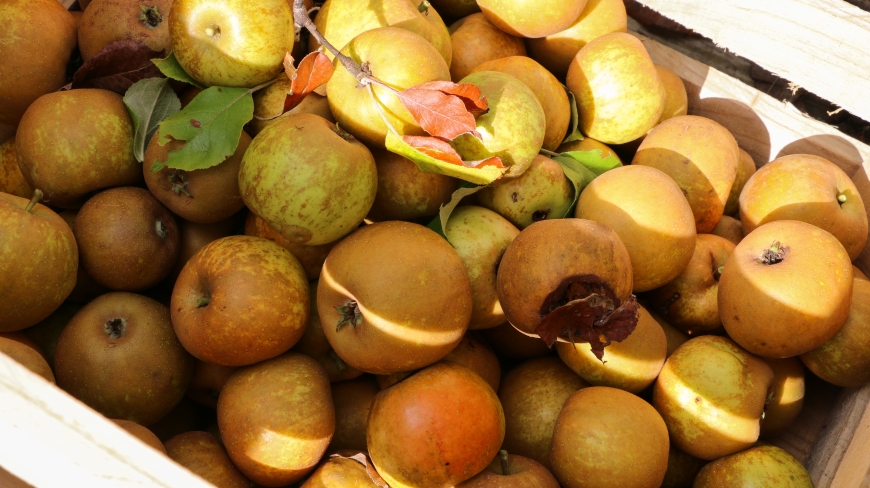 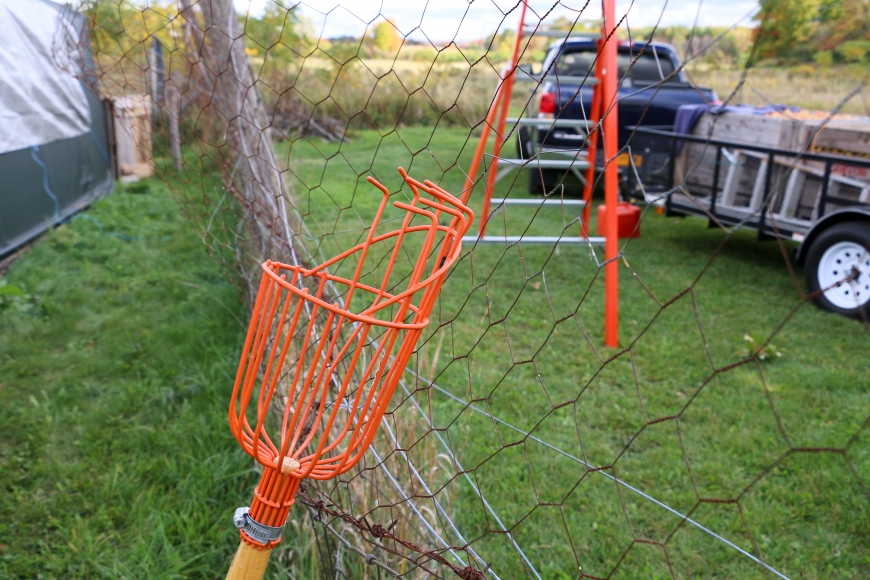 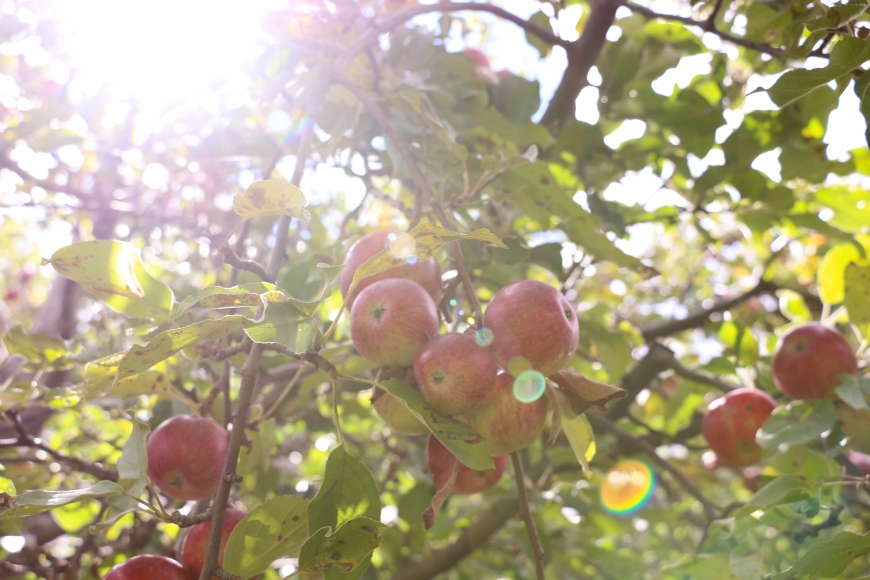 Apples ready to be picked at the Canton Apples orchard.

The Canton Apples orchard is open and ready for the U-Pick season.

These apples were picked from the orchard's other location in Canton, and are going to another orchard to be made into cider.

Joel and his workers picked these Golden Russet apples for customers who do not want to or cannot pick them on their own.

Customers can use these apple pickers to reach fruit higher on the tree.

Joel Howie is the owner of Canton Apples, a U-Pick apple orchard located on the corner of Barnes Road and County Road 25. He is originally from Rochester, NY, but moved to Canton in 2002 with his wife, Becky. Joel loves working outside all day long alongside his workers and friends and family who come to help out, and it shows in the quality of his product and the atmosphere on the orchard from the moment you drive up off of County Road 25. We met up with him to learn about being an orchardist in the North Country.

Nature Up North: What do you do here in the North Country?

Joel Howie: I own my own real estate appraisal business, that’s my full-time job. The apple orchard started as a hobby for me, and it’s grown into more of a business now. And I have friends and family who help me out throughout the week and on the weekends, harvesting and maintenance and check-in and check-out for the customers.

NUN: How does your lifestyle connect you to the environment?

JH: Well, of course I spend a lot of time outdoors in all sorts of weather. With the orchard, basically from wintertime pruning to springtime mowing and basically keeping track of insects and pests and so on and so forth.

NUN: What is your favorite thing to do in the North Country?

JH: My favorite thing to do in the North Country is probably fishing. I love to fish, but I also just like being outdoors and working in the orchard.

NUN: What is your favorite place in the North Country?

JH: My favorite place in the North Country is probably at my own home and at my orchards.

NUN: How did you get started with the orchard and why?

JH: I got started with the orchard through a woman who is a real estate agent and she used to take care of the orchard for the owner. And I was doing an appraisal with her one day and she asked me if I was interested in helping her with maintenance. I kind of have a horticultural background starting when I went to a school for it right out of high school. So I’ve always had an interest and then I ended up managing the whole orchard so I decided to open the U-Pick and we’re here today.

NUN: How long has the orchard been around and are you the first owner?

JH: No, the original owner of this orchard is the Vanderwater family. They planted the orchard, I’m going to guess, 40 years ago was the original portion. It may have been longer ago than that, but I know the other half section was planted in the early 90’s. So it’s an older orchard, but it’s a well thought-out orchard. The way that the varieties are planted and which varieties that they’ve decided to plant there.

NUN: How many varieties do you have?

JH: We have 19 here, but we also have another location on Finnegan Road that we maintain. And then I have an orchard behind my residence on the other side of town. We manage just about 385 trees total.

NUN: Wow, that’s incredible. Do you have any heritage varieties, or antique apples?

JH: We do specialize in heirloom varieties here. Of course we do have the modern [varieties], like Honeycrisp. Macoun I guess would be another modern variety. But we also have Irish Peach, Yellow Transparent, Golden Russet, and a couple other heirlooms.

NUN: Have you planted any recently yourself?

JH: Yes, at my residence I have nearly 65 different varieties and those trees are anywhere from 1 to 3 years old.

NUN: Did you graft them yourself?

JH: Nope, I purchased them locally from St. Lawrence Nurseries right in Potsdam, so I know that they’re hardy trees that will survive the winters up here.

NUN: Have you always been a U-Pick orchard and if not, why did you decided to become one?

JH: We are U-Pick because, number one, I like the people that come. We get anywhere from college students all the way up to older folks who can’t pick so I try to have pre-picked apples available for anyone who does not want to pick. But we also supply retail [stores]; we supply Nature’s Storehouse and Potsdam Co-Op with apples. We try to keep it local.

NUN: What would you say are the optimal conditions for growing apples?

NUN: And have you seen some years that haven’t been too optimal?

JH: Yes, in 2012, I believe, we had an extremely warm March and it pushed a lot of growth on the trees. If I recall, we were actually warmer than Miami, Florida that week. We were only open for U-Pick for one day, because that was all we had for apples.

NUN: Wow. That must have hurt business a lot then.

JH: Oh, it did. Luckily I don’t have to rely on this business for my income, like I said it started as a hobby. But it was discouraging. But I came back the next year and we actually have had three bumper crops since then so it’s doing pretty well for itself.

NUN: Do you notice any changes with the orchard, maybe caused by large-scale events affecting the trees like diseases or pests that you have noticed?

JH: Well, this year in the region we have had fire blight problems, which, luckily here we did not get it very bad. I know some orchards in the Champlain Valley lost sections of their orchard to fire blight. Here three or four trees may have gotten fire blight and I was able to take care of that easily.

NUN: Can you explain what fire blight is?

JH: Fire blight is a fungus that attacks the trees, and it enters the tree through blossoms in early spring. I’m not an expert on that disease, but I know that what it does is it kills the branch and it looks like a fire was started on the branch and turns it black, leaves and everything. So it can be pretty serious.

NUN: How do you deal with the fire blight and keeping pests and bugs off of the trees?

JH: Fire blight is managed by pruning off the diseased branch and then disposing of it properly. Which means either burning it or putting it in a black plastic bag and putting it in the sun to kill any of the pathogens that are in the plant material. For pests, I try not to spray here. I use more organic sprays here like Dorman oil. Neem oil is another one. It’s just because I don’t like to expose myself to chemicals, number one. And I do believe it stays in the fruit throughout the year if you continue with that.

NUN: Have you had to change any of your processes over the years in terms of how you deal with pests or pruning?

JH: When I first started, I didn’t know much about being an orchardist. So I learn something new every year. And actually last year I decided to go with a more natural fertilizer program. So as you can see throughout the orchard I have loads of wood chips, which I will spread after the leaves drop and hopefully that will help with my fertilizer and also the fungus balance on the orchard floor. I know some orchards don’t take that approach, but I’m just going to give it a shot and see what happens.

NUN: What would you say is the best part of running the orchard?

JH: The best part? I would have to say seeing the people, many different people and repeat customers. I do have a customer who is the parent of a student at St. Lawrence and this was her first year coming back and she emails me ahead of time every year saying “I’m going to be there!” and I just think it’s really great to have that kind of relationship with a customer.

Amanda loves exploring the outdoors by hiking, swimming, biking, and canoeing, and is interested in recording her experiences with it through various media including writing, photography, and videography. She hopes to translate her love of nature through this internship and help inspire others to get outdoors and learn more about their local environment. Amanda was a Digital Media Intern at Nature Up North in 2017.