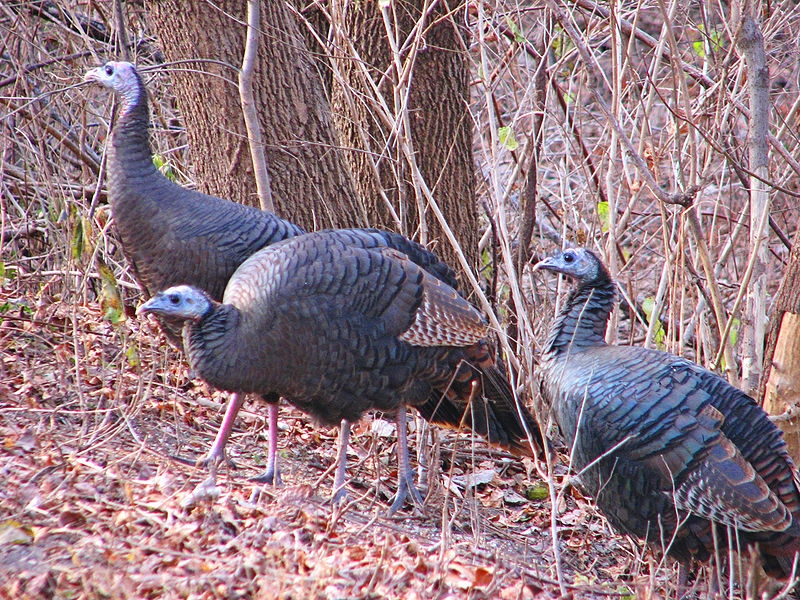 Turkey hens on the edge of the forest. Image by D. Gordon, E. Robertson

In honor of Thanksgiving, I’m going to pause and give thanks for a North Country native, the wild turkey. Likely you’ve seen these large birds traveling in flocks along the side of the road. But did you know that they were once rare in these parts?  And across the country? The abundance of wild turkeys across North America is a real conservation success story. And, oddly enough, the story of the domesticated turkey that many of us will feast on this weekend is related.

So, here’s the deal.  Wild turkeys are a game bird native to the Americas and are the same critter from which our Butterball ™ turkeys come. In the mid-1500’s, European explorers visiting Mexico took wild turkeys back to Europe with them.  Those same turkeys were domesticated over the years throughout Europe. When colonists came to what is now the United States, they brought domesticated turkeys with them. While turkey farming (of the domesticated variety) took off here (about 254 million turkeys were raised as food in 2012) turkey was not the focus of the first Thanksgiving meal. In fact, wild turkey numbers plummeted in the northeast and the country as a whole as the United States grew as a nation.

You see, wild turkeys are forest birds. They prefer mature hardwood forests with an abundance of nut-producing trees like oaks and American beech.  Turkeys use their strong feet to scratch in the leaf-litter in search of berries, nuts, and invertebrates like insects and snails. As settlers moved across the country, most of the forests were cut for timber to supply the construction boom. Without forests, wild turkey numbers declined. In addition, wild turkeys were overhunted.  Together, these two factors led to a steady decline in wild turkey through the 19th and early 20th centuries.  In the early 1900’s we attempted to prop up turkey numbers by introducing domesticated turkeys to the wild.  Alas, a few hundred years of domestication resulted in a bird that could no longer thrive in the wild. It wasn’t until the 1940’s that successful transplantations of wild turkeys from stable populations into reforested areas resulted in stabilization of wild turkey populations. Since the mid-1960’s, wild turkeys have experienced a strong resurgence, with populations increasing at about 8% per year. The species has regained and even expanded its historic range, and now can be found in 49 states (all but Alaska). Unlike their domesticated counterparts, wild turkeys are intelligent and curious birds. Benjamin Franklin thought that the wild turkey should be the symbol of the nation. He viewed bald eagles as “of bad moral character” whereas turkeys were “a much more respectable bird, and withal a true original native of America… He is besides, though a little vain & silly, a bird of courage”. In the 1970s, a common insult was to call someone a “turkey”, a reference to the domestic turkey that has, as a result of breeding for large breasts and tasty meat, lost its intelligence!

Wild turkeys are abundant in the North Country.  In the spring, look for males, in fine breeding plumage, who gather together in clearings to begin courtship displays. Males strut and gobble to attract females and intimidate other males. Males will mate with multiple females, but the females do all the work in raising the young. New chicks follow and are fed by their mothers for a few days. As their chicks grow, several females will band together into flocks consisting of several females and their respective young. Outside of the breeding season, males gather together in all-male flocks. Within each sex there is a defined “pecking order.”  Among males, the dominant position is challenged, whereas the social hierarchy is more fixed among females. Your chances of seeing turkeys are best if you go out early in the day when the birds are often found along the edge of woods or roadsides foraging. Turkeys are strong short-distance fliers. If startled, males are more likely to stick to the ground, and females more likely to fly. At night, turkeys fly up into the branches of trees, singly or in small groups, to roost.

So, this Thanksgiving, maybe you’ll join me in giving thanks for the wild turkey, and for the fact that we are so lucky to have these birds among us here in northern New York.  Just another reason to be thankful that we live here in the North Country. For more information on wild turkeys: 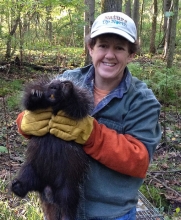 Erika Barthelmess is a vertebrate ecologist and conservation biologist and director of the Nature Up North project. Erika works as a Professor of Biology at St. Lawrence University. Her research interests are broad and include the biology of small, isolated populations, the intersection of behavioral ecology and conservation, road ecology, and the ecology and natural history of porcupines. Erika enjoys hiking, canoeing, camping, and Labrador retrievers.

I suspect they do,

I suspect they do, opportunistically off of themselves and if encountered on the ground, though I don't think they seek out ticks.