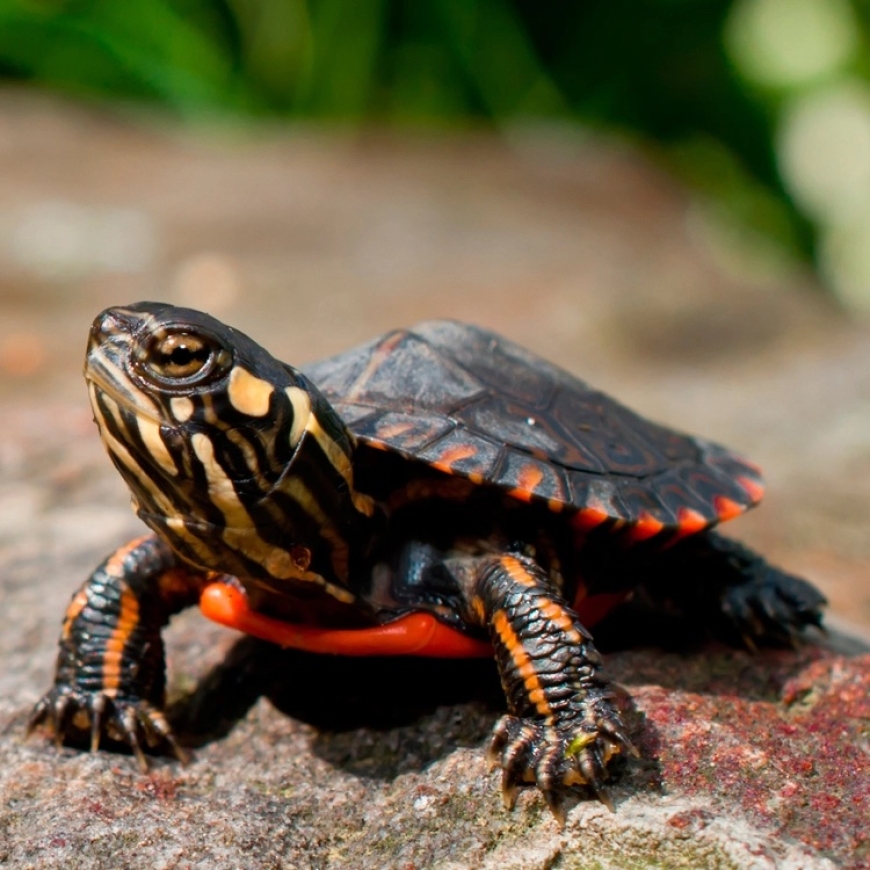 As soon as the ponds thaw and the temperatures warm, we know the earth is preparing for spring and summer. The flowers begin to bud and the grasses green again. We pack away our winter jackets and dig out the t-shirts and shorts. But it’s not just humans who recognize this transition. Our North Country wildlife recognize these same changes in the environment and come out for the warmer months of the year. As we enter July you have probably noticed some of your favorite North Country animals reemerging. Birds, bears, bees, and painted turtles!

I drive slowly on a dirt road. I am on my way to complete a morning summit of Mt. Azure. It’s a cool day, but sunny. As I drive, John Mayer plays on the radio, and I feel the breeze tickle my face through the half-opened windows. I smell the pine needles and the pollen in the air. I follow the directions on my phone and even though I know I am headed the right way I can’t help but wonder if this dirt road I am on will lead me anywhere but my destination. As I hum to the radio and begin to drive up a small hill, I see something in the road. At first, I didn't think much of it–the roadkill this spring has been so bad that seeing expired wildlife devastatingly slumped on the side of the road feels so ordinary. It looks petite and round and my first thought is that it’s a small porcupine. As my car inches closer I see it's actually a turtle.

Painted turtles are active in the warmer months of the year. In the North Country, these turtles love the sun! They are cold blooded so they need sun to warm their body temperature. You will often catch them sunbathing on logs and rocks in ponds. During the long, cold, North Country winters, however, painted turtles hide away in ponds. These creatures hibernate in the winter under the water and have the ability to survive the entire winter with very little oxygen while under the ice. The key to this trick is that their body slows their metabolism down and their body exchanges small amounts of gas while under the water, but they do not actually breathe. As the ice thaws, the warmer water temperatures signal the painted turtle’s metabolism to speed up, and we begin to spot them on land again, and on roads.

Small, dark colored, and smooth, the shell catches my eye. I glimpse a small jolt of movement from the shell and stop my car. I breathe out in relief; the turtle is alive. There is no one else on the dirt road, so I park my car on the hill and open my door. Although the road is quiet and I haven’t seen a single car pass me, I want to get him out of the road as quickly as I can, I feel a responsibility to get this little creature to safety. I step over him and lean down to get a closer look. It is here that I quickly understand that I have stumbled across a painted turtle.

In the North Country, painted turtles are very common. As exciting as it was for me to find one on the road, it is not surprising. These turtles are easily identifiable, with bright yellow stripes and splotches on their head and neck. A similar red pattern covers their lower neck and their front legs. The shell of these amazing reptiles is a beige orange color on the bottom, while the top shell is a dark olive black color.

I wonder how old this turtle is, and how far he is from home. Did he just hatch or is this an old turtle? But as I get closer I realize he is way too large to be a freshly hatched turtle. Female painted turtles lay their eggs from the late spring and into mid-summer. Most often when they lay their eggs, they bury them in the ground to keep them safe from predators. Their eggs are white and incubate for about 72 days (3-4 months) before the new turtles hatch. Favorite nesting conditions are in gravelly or sandy areas so keep an eye out for disrupted soil, but make sure not to move the eggs. In late summer and early fall the eggs hatch and new baby turtles emerge. I examine his shell and his size; he looks small to me, I determine he is a male because male painted turtles are smaller than females.

I wonder if he is hungry. Painted Turtles eat plants as well as small animals like insects, macroinvertebrates, and small fish. I must admit how relieved I was when I realized it was a painted turtle and not a snapper. Snapping turtles have such powerful jaws that they can break through bone. Painted turtles actually don’t have teeth, but have rounded discs in their mouths that help them chew.

As I pick him up, I watch his head disappear into the top of his shell, and he squirms his legs in protest. I quickly head in the direction of the grassy side of the road. He was centered in the middle of the road, so I had to guess which side to bring him to, but I figured either side is better than the middle.  I think about how startling it must be for a turtle to be wandering across a road and then to suddenly be lifted into the air by something without warning, without knowing if you are about to be captured or eaten or dropped.

A gust of warm breeze meets me in the middle of the path as I carry the little guy across the road. The familiar smell of the environment I have fallen in love with brings me comfort. The North Country sometimes feels more like my home than the place I grew up. The painted turtles have called the North Country home far longer than we have. There are fossil records of painted turtles in New York that date back almost 300,000 years, which is about as long as humans have existed. These turtles prefer to live in freshwater ponds and slow-moving streams where they can scour the bottom of the water for food.

As I plop him in the grass, he immediately scampers away in choppy steps with his front and hind legs carrying his shell away. It really is amazing how quickly turtles can move when they want to. They have such a reputation for being so slow, but I watch him run away and disappear into the trees and bushes. Slowly I  return to my car.  As I drive, I keep my eyes peeled for any other turtle friends as I continue with my day.

Turtles do a lot to maintain the environment around us. They aid in keeping freshwater bodies of water healthy by controlling aquatic vegetation and insect populations throughout their habitats. Although I only spent about thirty seconds with this painted turtle, the interaction made me realize how many amazing creatures live in our North Country backyard.

As we move through July and August this summer, keep an eye out for painted turtles. Although common, they are beautiful creatures. One thing you can do if you ever spot a painted turtle in the North country is estimate their age. By counting the rings on their shells, you can get an approximate estimation for how old the turtle is. Painted turtles have been known to live between 20 and 40 years! Next time you encounter a painted turtle try to see if you can guess their age before they dive back under the waters for the winter.