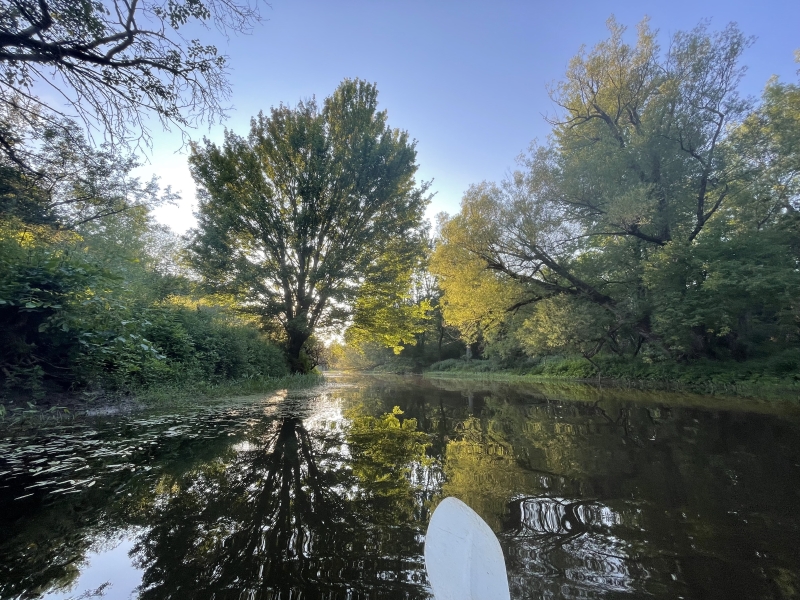 Nature Up North has spent the summer getting back outside after a hiatus from summer activities due to COVID. We have really focused on being outside as much as we can and encouraged ourselves and other North Country community members to connect with nature this summer. There is so much to see, but our sight is only a small part of how we can really connect. Using all our senses when we are outside enhances our experience because we can understand much more about our environment around us when we do more than look. Using your hearing is just as important as looking because often there are animals that we can hear that we can’t see. This segment captures some of our favorite nature sounds of the summer, so hopefully you can begin to bridge the gap between seeing nature and being in nature.

As you walk the trail of Nicandri Nature Center, you will see many species of trees, animal tracks, and even a section of the St. Lawrence River. The trails are beautiful, but the sights to see are only half the experience. This recording captures the chirping, calling, and whistling of the birds that live in the NoCo.

The sweet and familiar chirpy call in this recording is a cardinal. Cardinals have many different calls, and each call means something different. This particular chirp is most likely a warning call, used to communicate the presence of a predator or to mark their territory. Cardinals are known for having bright red plumage all over their body and their black face. Cardinals also famously have a red crest of feathers on the top of their head which often stick up. Traditionally cardinals hold a lot of symbolic meaning for humans. Often people associate the bird with spiritual positivity, and believe that the bird is a sign of a loved one who has passed away.

This recording captures the Red-eyed Vireo’s call. This bird is small but mighty with olive colored feathers on their backs and white feathers on their belly. You can often find them singing in large leafed deciduous trees and they love to eat caterpillars. Their sweet twitter is most often heard in the warmer months of the year. Have you heard their call before?

The cascading water down the rocks creates an almost overwhelming thundering noise. I was surprised to learn how difficult it is to hear anything besides the water. Lampson Falls is part of the Grasse River which was created from a series of small lakes and streams and is one of the five major rivers in St. Lawrence County. Lampson Falls has an eerie and almost spooky atmosphere when the weather is foggy, but when the sun is shining so are the falls. Lampson is a great place for people to swim in the warmer months of the year. For more fun Lampson Falls history, check out NCPR’s story!

This was collected at Lampson Falls in the early evening. The sounds of crackling fire  overlap with the rushing falls in the background. As the campfire crackles and we hear the popping of the wood, sticky marshmallows roast above the flames and pesky mosquitoes are driven away from the smoke. Some campfires can reach temperatures upwards of 1650 degrees Fahrenheit. There are two main ways to build fires: the teepee method or the log cabin method. First method (and the method used to build this fire) is called the teepee method because logs are leaned up against each other in a pyramid shape with kindling on the bottom. The other common fire building technique is known as the log cabin. In this method, logs are stacked up horizontally in a square. A new study shows that humans have been using controlled fires for warmth and cooking for around a million years.

This sound captures the crunch of shoes on gravel and the shuffle of feet on grass. This nature noise brings us right back to every nature walk we have taken through forests and on dirt roads, with dappled sunlight peeking through the branches and painting the ground. Nature walks for pleasure began in the United States in the 20th century as increased industrialization in the country made walking in quiet scenery more difficult and rare. Now hiking and walking in the woods is considered a recreational sport and North Country trails are mapped out for our enjoyment. I took this walk in Greenwood Creek State Forest on a sunny afternoon through trees and dirt patches.

The babbling brook of Greenwood Creek in Greenwood Creek State Forest. As you listen to the rushing water flowing try to imagine the path the water travels as it dips down and falls over rocks. This section of Greenwood Creek declines in elevation and the water trickles down into a calm pool of stream water. The creek then flows into the west branch of the Oswegatchie River, one of St. Lawrence County’s major rivers. Underneath the bubbling stream lies an entire ecosystem of creatures. The stream is home to many macroinvertebrates like water pennies and various fly larvae, while the river is  home to brook trout and many other aquatic animals. This sound is different from the rushing water at Lampson Falls. Based on sound alone can you pick out some differences?

This recording is also from a trip to Greenwood Creek State Forest. This nature walk captures the various bird calls we hear when we are outside, but that often fade into the backgroud to. Oftentimes we are focused on what we can see when we are outside and forget to use our other senses. Listening to the environment often reveals things hiding that we would otherwise miss with our eyes.

Little river paddle. There is something so soothing about the splashes and drips of a paddle in the water on a quiet evening. This audio was recorded during one of Nature Up North’s community paddles. The Little River is the perfect spot for a peaceful paddle; the water is flat and slow moving. The river filters out to the Grasse River, one of the five main rivers in St. Lawrence county. Both the Grasse and the Little River are home to many summer critters, like beavers and northern pike, although they are difficult to hear and even more difficult to spot.

The pitter patter of rain is exactly what we needed in July after such a long stretch of hot, humid days. There is something so calming about a rainy day. It feels cozy and safe, and yet nature is hard at work. The rain falls when the clouds in the sky become too heavy and full of water droplets. When it rains, the ground absorbs the water, and then plants use it to photosynthesize so animals can eat the plants. Thanks to the rain, the cycle continues. 2022 has brought the rain to the North Country. Since January, the North Country has experienced an increase of 3.12 inches of rain on average, marking the year as the 20th wettest year in recorded history.

The trees' leaves rustle as the wind whistles through them. It is important for tree branches to be flexible so when the wind blows the branches aren’t damaged. Many tree leaves actually flip over during a storm. This is because leaves naturally grow in accordance to the area’s prevailing wind, but when storms occur the wind usually comes from a different direction so the leaves flip over.

These chirping sounds may sound like music, perhaps a drum beat or the spring of a guitar, but this natural noise actually depicts the chirping and ribbeting of our North Country frogs! We have many frogs and toads in this part of the world, but the most common to spot (or hear) are the Leopard Frog, the Wood Frog, the Green Frog and the Bullfrog. But the Green Frog and the Bullfrog take the cake for the best and loudest frog noises. Next time you are near a body of water, try to listen for and maybe even identify which frogs you hear.

This short recording captures one of the ways that Green Frogs communicate with each other. All frogs have unique calls that they use to pass messages between other frogs, but the Green Frog’s alarm is pretty unique. These frogs have a high chirpy call which signals to other frogs that danger is approaching. Although the call may sound like a chirping bird, it is actually a frog, likely chirping from a log, a rock, or shallow edge of a pond. Once one frog senses a predator they warn the others to find safety. You can hear many frogs mimic the call after the first alarm was raised and then each frog jumps into the water and hides until safety is available.