The Circle of Life and Death in the North Country 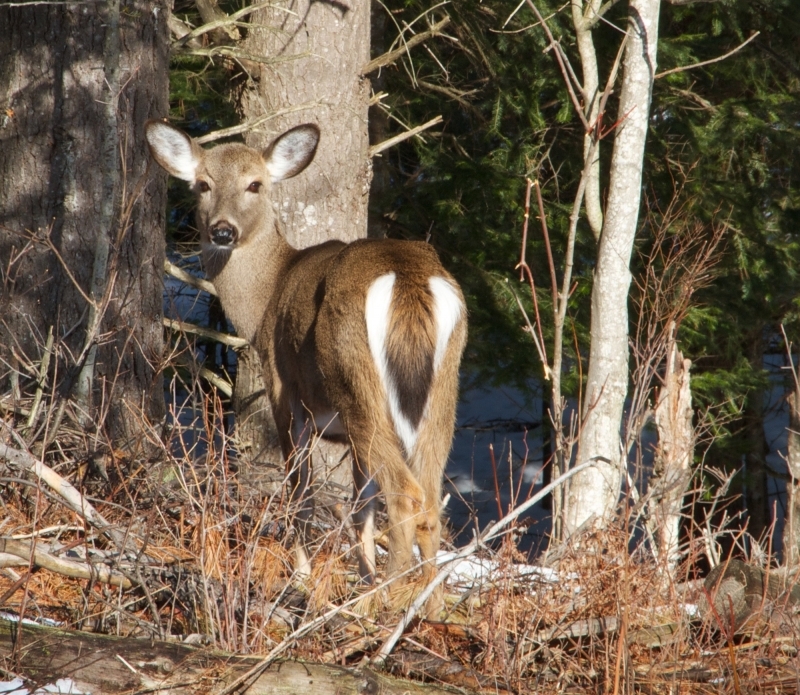 The Circle of Life and Death in the North Country

This year Nature Up North is featuring a Winter Ecology Series, in which St. Lawrence University students in Dr. Karl McKnight's Winter Ecology course share their observations from a weekly field trip to Glenmeal State Forest in Pierrepont.  We hope you enjoy their accounts from days spent in the woods examining the fascinating ways plants and animals endure the North Country winter.

WARNING:  The post below contains images that some may find disturbing.

I saw its head first. Well, I saw the crow first. The black bird took off at the crunch of my snowshoes, and I stopped to catch my breath and admire its beauty. Then I saw it.  Even as the head took shape I could make out matted fur and the awkward positioning of its feet, which confirmed that this deer was dead.

Minutes earlier, Jenny and I were tromping through the woods when we stumbled upon two porcupines hanging out in a hemlock. We marveled at the excitement of life just as I was marveling at the harshness and sheer messiness of death. I didn’t feel the tug on my heart of remorse and pity for the deer; I was more interested in the story and what had happened. Who killed it? How long had it been there? Questions raced through my head as I did the only logical thing I could think of and pulled out my cell phone. I traced the neck with my eyes, and noticed the trachea still in place, holding the head barely to its body even as my phone dialed Tom’s number. I knew Karl would want to see this, and I knew he was with Jimmy. With no luck I called Nat as well, and alternated between the two until I finally got an answer, but Karl had already moved on. Brimming full of excitement I took off running, down the hill and up the hill towards the meeting stump. No one was there. I waited in anticipation – I knew Karl would be back eventually. As I was waiting there the strangest thing happened. I heard rustling in the snow and looked off to my right, expecting to see a kindred snowshoer. However, it was a deer, bounding gracefully through the deep, grainy snow. It came right up close to me, and stopped, looking around until it met my gaze – eyes wide and ears alert.

A crunching noise sent the deer off, running into the woods. I gazed long after its white tail had disappeared, remembering how its muscles moved seamlessly to allow the deer to race through the trees and maneuver around the rocks and cliffs. It was the first live deer I had seen at Glenmeal.

The side facing upwards had meat left on the bones, with its ribs still connected to each other by striated muscle knitted together. The large, femur-like bones in its legs were stripped bare, although fur remained, clinging to its legs and knees. Its dainty hooves looked fragile in death, and one leg was missing completely. Blood littered the snow around the body, and I followed the trail of fur and blood as in winded upwards along a ridge and into the trees. The clearing was quiet for now, but the bloody scene painted in the snow brought forth sounds of long-gone screams that reverberated around the sunny clearing only hours before.

Death is messy, but death is common, and it is necessary. There was one less deer in Glenmeal today, but a couple coyotes, perhaps a fisher, a crow, and other scavengers of the forest would be fed enough to brave the bitter cold for one more night. The struggle continues, and life endures in the shadow of death. 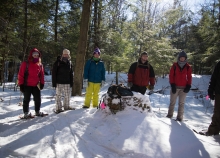 Each week, the Winter Ecology course at St. Lawrence University, led by Dr. Karl McKnight, ventures into Glenmeal State Forest in Pierrepont to observe the fascinating ways North Country plants and animals adapt to winter conditions. These are their notes from the field.