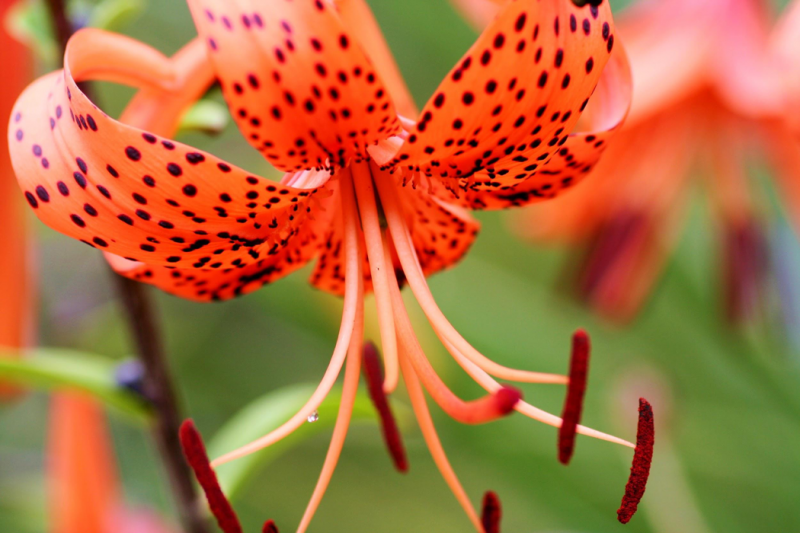 Gardeners throughout the northern United States are likely familiar with the Lily Leaf Beetle (Lilioceris lilii), a non-native invasive insect that can quickly decimate lilies in gardens.  However, the beetle also has potential to extirpate populations of native lilies.  In North America, native lilies tend to grow in small, low-density populations. Native lilies alone offer the beetle a limited supply of feeding and breeding sites, which would likely limit its reproduction and dispersion.

Lilies are ubiquitous in gardens throughout North America. This unnatural density of food and breeding sites greatly increases the reproductive and dispersion capacity of the beetle. Thus, controlling the beetle in high-density stands of lilies in gardens can help prevent the spread of the beetle into the sparse populations of native lilies.

In northern NY, we have only one species of native lily that’s fairly common: Lilium canadense.  I have found only about a dozen populations of these lilies in all of St. Lawrence County. 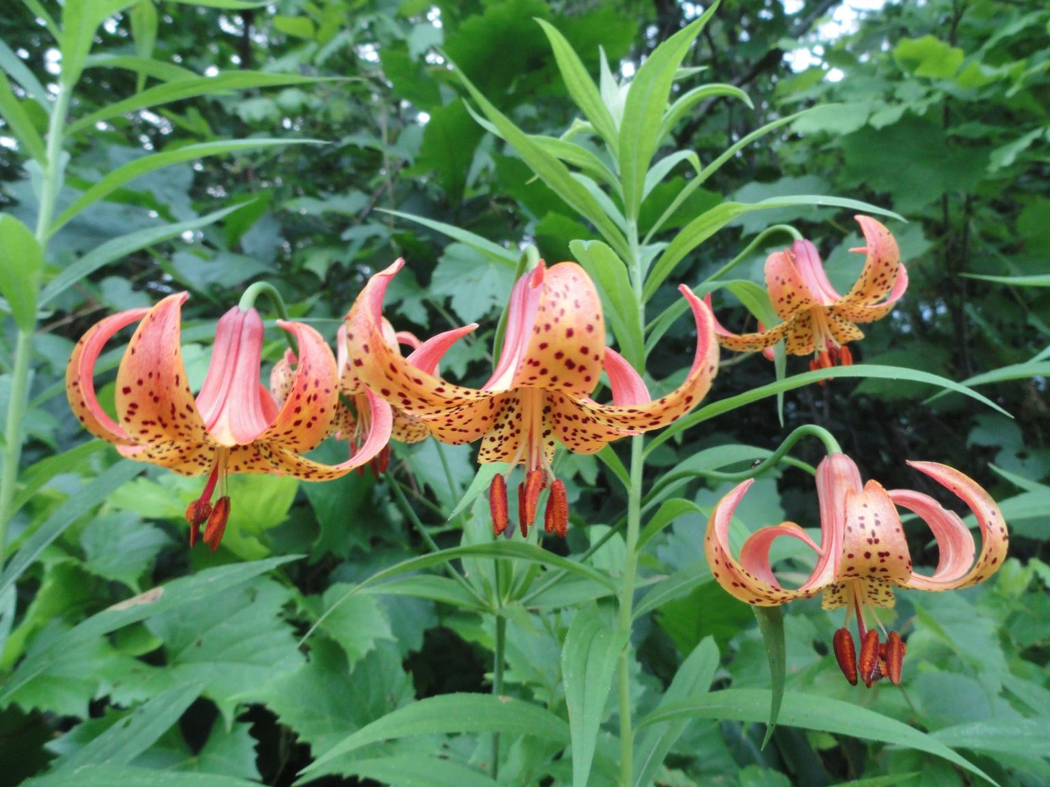 Northern NY is at the eastern edge of a similar species, L. michiganense.  As the name implies, this species is more common in the Upper Midwest. 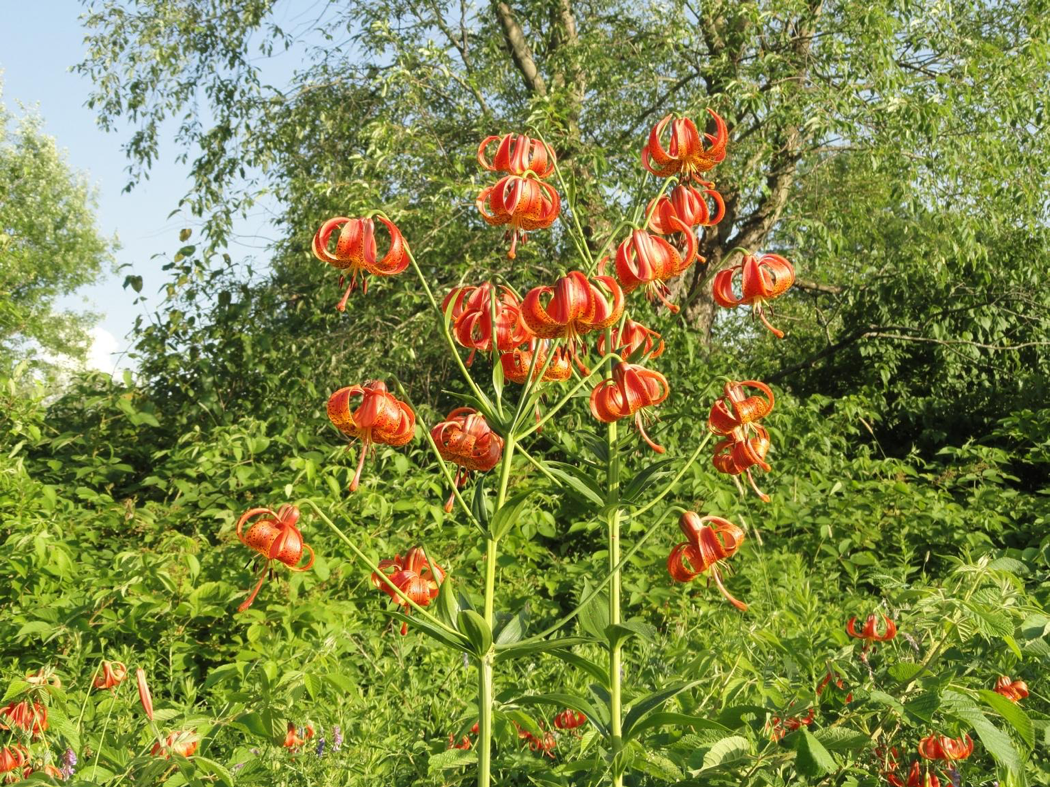 Another similar species, L. superbum, is found in lower New England and the Mid-Atlantic states. 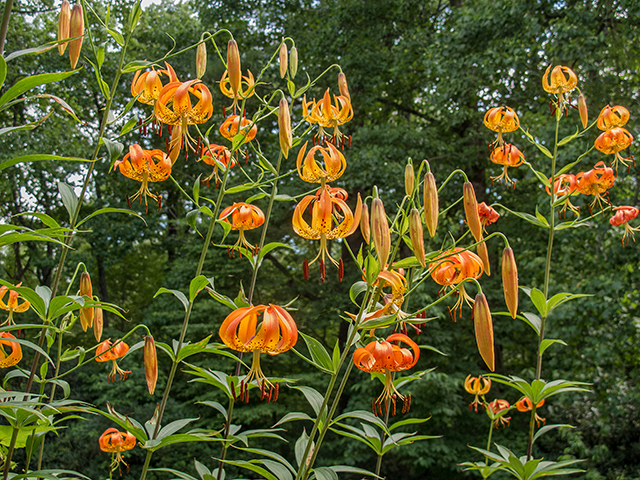 L. canadense, L. michiganense, and L. superbum all prefer moist environments, such as moist meadows, forest edges, and even roadside ditches.  Many people call them “Turk’s Cap Lilies,” even though that common name “officially” applies only to L. superbum.

There is one other species native to the northern US, L. philadelphicum, which prefers drier environments (such as prairies or alvars).  There are only two isolated populations in the North Country, in Chaumont. 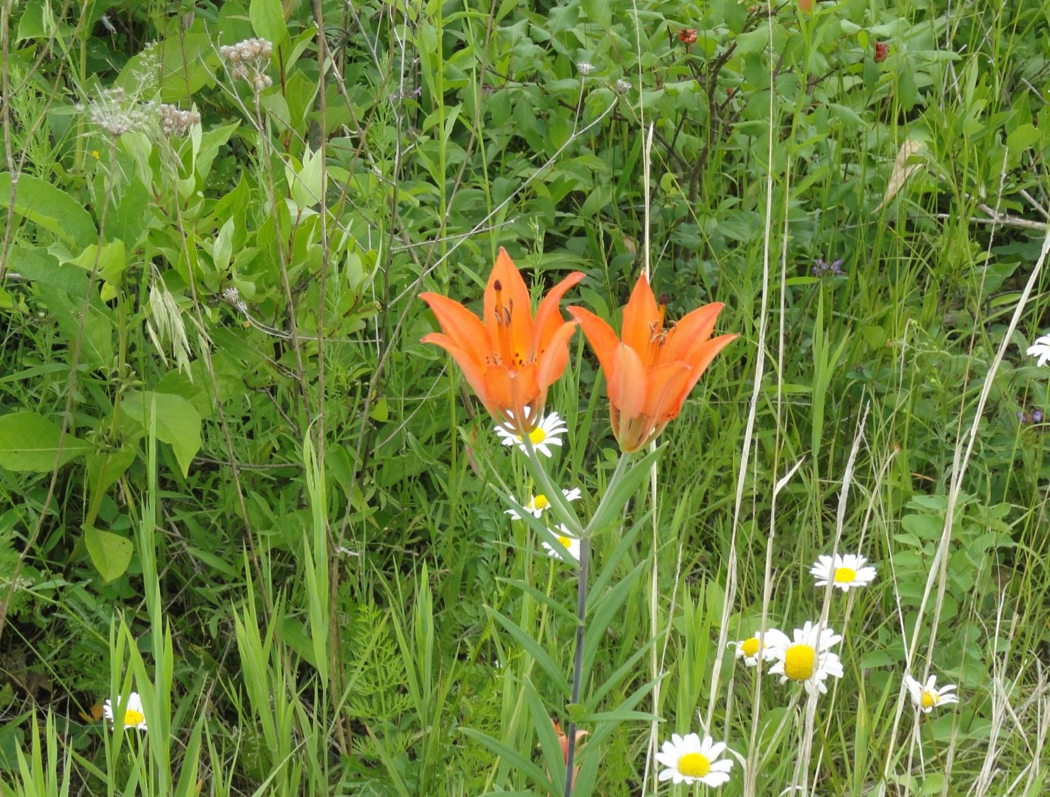 There is one non-native species of lily that has escaped from gardens and has become established throughout the northern US, L. lancifolium (syn L. trigrinum splendens), which many people call the Tiger Lily.  It can be distinguished from our native species by its hairy stems, and by black bulbils that form at the base of its leaves. 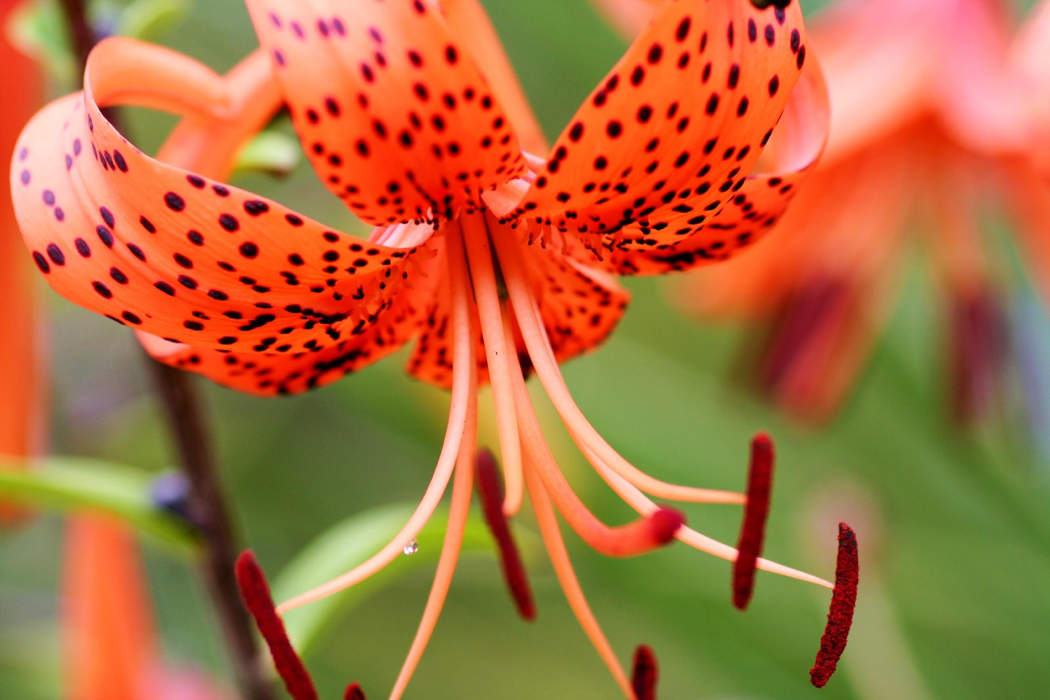 Please note:  I am conducting a multi-year survey of infestation of the Lily Leaf Beetle on wild populations of native (and introduced) lilies in northern NY.  You can help me with this project!  If you know of any stands of wild lilies, please send me the location: paul@paulsiskind.com.

The Natural History and Life Cycle of the Beetle

The Lily Leaf Beetle is about 3/8" long.  The tops of its head and wing covers are bright red, whereas its underside, legs, and antennae are black. 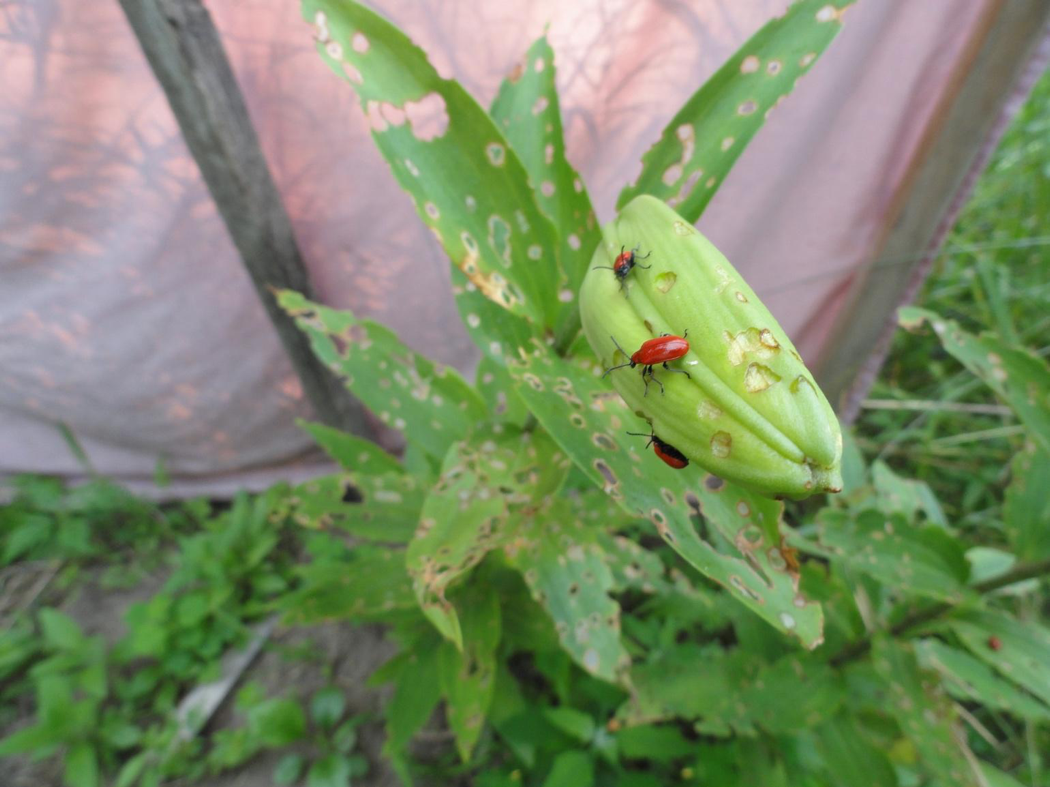 The beetle is originally native to Asia and Europe.  It feeds (and breeds) only on “true” bulbous lilies in the genera Lilium and Fritillaria; it does not feed on daylilies (Hemerocallis).

The beetle was first reported in North America in 1943, in Montreal.  It’s assumed that it was imported in a batch of lily bulbs grown in Holland.  That original infestation didn’t spread widely away from Montreal.  A second importation arrived in Boston in 1992.  This population spread much more quickly, and eventually merged with the Montreal population.  By 2012, the beetle had spread all the way to the West Coast.

Adult beetles hibernate during the winter, buried in leaf litter.  These adults emerge from hibernation at the same time as most lilies are sprouting, and they immediately begin feeding on the developing stalks. These adults feed for about five weeks; they do only moderate damage to the leaves of their host plants. Most sources state that the beetle lives for only one year, and that there is only one generation of beetles per year; however, there are some reports that contradict this.

During this time, the beetles mate. The females then lay their eggs on the underside of lily leaves.  The eggs are about 1/16" long, and are often laid in rows.  They are bright orange when they're laid, but they darken a little before they hatch.  The eggs hatch in about a week.  A single female can lay more than 400 eggs in a season. 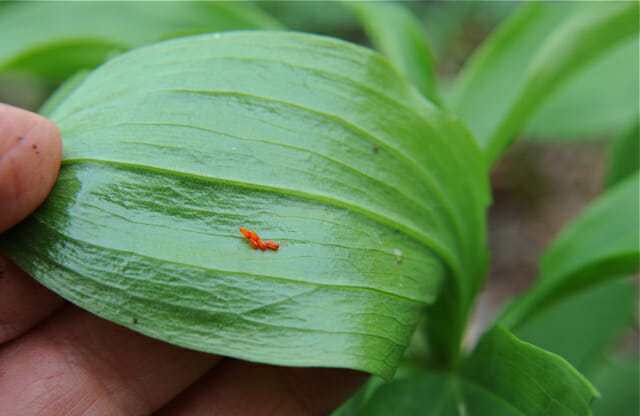 The larvae feed much more voraciously than the adults do.  In fact, a group of larvae can often totally defoliate a lily stalk within a few days.  The larvae eventually reach about 3/8" long in about 2 weeks.  At this point, they climb down the stalk and burrow into the ground to pupate.

The new adults emerge in about 2-3 weeks.  They resume feeding on whatever's left behind from the onslaught of the larvae.  It appears that at least some of these new adults fly away to new areas, while other new beetles might fly in from other areas.

In sum:  A season of the beetle has three overlapping "waves": 1) adults that hatched the previous year; 2) this year's larvae; 3) this year's new adults.

Adult beetles have a rather effective defense mechanism: When they see movement nearby, they quickly let go of the leaf, and slide off it, dropping to the ground.  This makes it very hard to pick the beetles off of the plants. They usually land on their backs; because their bellies are black, it's very hard to see them against the soil background.

The larvae have a very different defense mechanism: They cover their entire body with a coating of their own excrement.  This "fecal shield" is a common defense strategy among many chrysomelid beetles.  It's assumed that the fecal shield provides three types of protection: physical slipperiness; a foul smell and/or taste; and it might contain natural chemical insecticides that were ingested from the plants they eat. 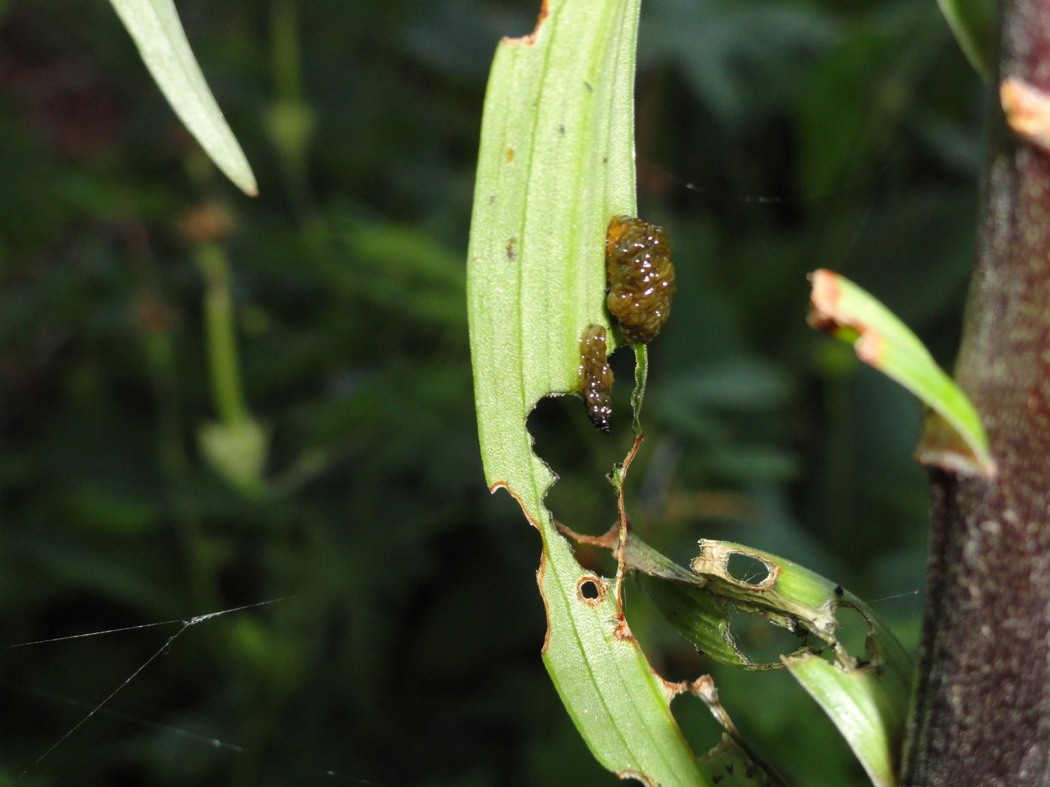 The larvae appear to have few predators in the wild.  If the larvae shed their shield (e.g. when molting, or to dislodge an irritant), they appear to be easy prey for predators such as spiders and wasps.  The fecal shield makes it very hard (and disgusting) for humans to pick off the larvae by hand.

In their native range, it appears that the beetle's population is kept in check by six species of very small wasps and flies.  These insert their eggs into the body of the larvae (through the fecal shield); when these eggs hatch, they eat the larvae/pupae from the inside, killing it.  This is type of parasitism is fairly common among insects. 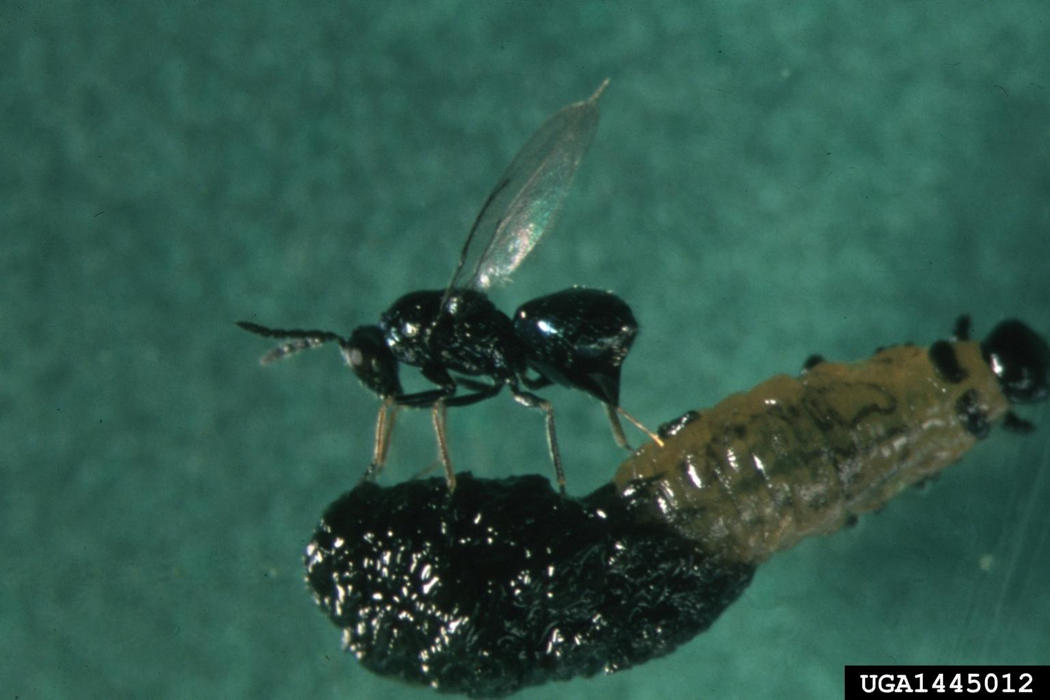 Paul is an Adjunct Assistant Professor in the First Year Program at St. Lawrence University.

So interesting! I have seen these beetles before and wondered what they were. It's s great to know about the life cycle and identification.

Thanks for the info!