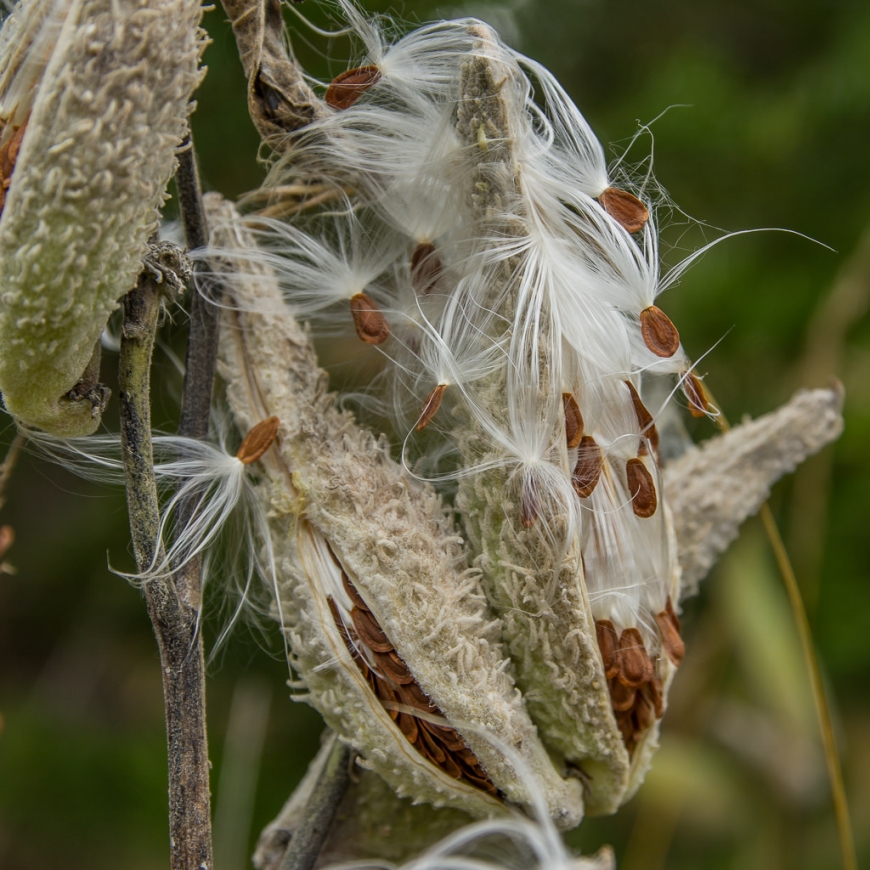 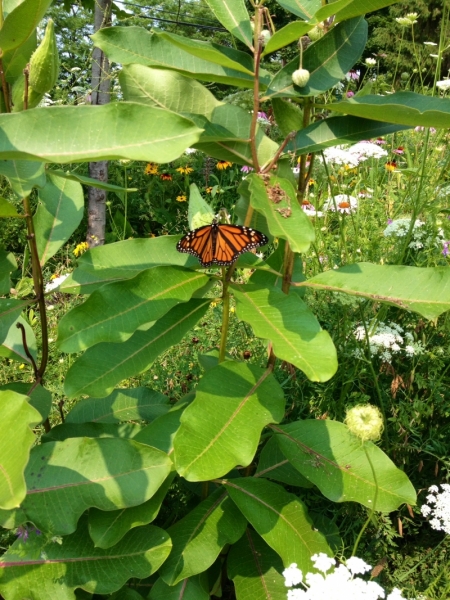 After the cloud-like flocks of blackbirds have departed, swarming like giant amoebas toward points south, and the broad chevrons of geese have mostly disappeared over the horizon, another momentous fall event begins. Yes, it’s time for one more native species to take to the air—the great milkweed migration is on.

By late summer, milkweed pods are bursting with mature seeds affixed to bundles of platinum floss that lie damp and orderly, waiting for autumn emancipation. Following a good frost each pod dries out and splits perfectly along a seam into two boat-like halves, exposing a cache of silk. The wind teases this material from the dry-docked pod halves, launching countless puffy, seed-bearing paratroopers to the wind.

Many farmers and gardeners are not impressed by such choreography, as milkweed can be a real nuisance in some crops. Not only is it a perennial, it spreads quite effectively through its robust root system as well as its migratory seeds. However, certain butterflies are happy about the white parachutes of autumn.

The survival of monarch butterflies depends on continual access to milkweed from their winter home in Mexico up to the Great Lakes as they move northward each spring. Recently monarch populations have declined sharply, due in large part to habitat loss in Mexico, but also to milkweed issues. Increased use of agricultural herbicides along with continued urban sprawl have resulted in less milkweed. In addition, monarch caterpillars are being poisoned when insecticide-tainted corn pollen drifts onto the milkweed plants they’re eating.

Farmers and butterflies may soon be playing for the same team, though, because milkweed is poised to become an economically viable crop. Native peoples and settlers used milkweed for food, medicine, fiber and even sugar, and we’ve all heard how its buoyant floss was gathered during World War II and used by the military in life preservers.

But modern research is what has landed our native, latex-bearing “weed” on the economic map. The Agricultural Research Service, a division of the United States Department of Agriculture, has found a number of important new uses for milkweed.

The silky floss is already in use in the textile industry. Companies like the Natural Fibers Corporation of Ogallala, NE use it in comforters and down jackets. One of the main advantages of milkweed floss compared to goose down is that it is hypo-allergenic. It’s also 10% warmer, 20% more durable and 50% more breathable than down. As an added plus, it appeals to consumers who don’t want goods made with animal products. During WWII, schoolchildren gathered floss by hand for life jackets, but today it can be harvested on a large scale with a slightly modified grain combine.

One of the byproducts of floss production is milkweed seed, which is can’t be fed to livestock because it’s poisonous. Research done in Illinois and Washington State found a silver lining—its toxicity makes it valuable as a pesticide against fall armyworms and certain nematodes, which can devastate alfalfa, soybeans, potatoes and many other crops. In one trial, ground milkweed seed, tilled into the soil, killed 97% of destructive nematodes.

The fact that milkweed sap, or latex, is rich in hydrocarbons has been known for decades. Farm Show, an online farming magazine, ran an article not long ago about a private Utah-based research firm called Native Plants. Initial funding from the U.S. Department of Energy enabled the company to start investigating latex as a source of crude oil. Native Plants was later financed by the petroleum industry.

Before it flowers, milkweed is mowed and baled using conventional farm equipment, and then processed to extract oil. The residue, which is 20% protein, can be used as animal feed. Although at current prices it is not profitable to extract oil from milkweed, that could easily change in the future.

But more work is needed before milkweed hits the mainstream. It turns out that while patches of milkweed thrive on roadsides and in meadows, when it is grown on a large scale as a monoculture, disease becomes a problem. And then there’s the question of milkweed’s image. According to Herb Knudson, founder and CEO of Natural Fibers Corporation, one of his marketing obstacles is that “weed” is in the name.