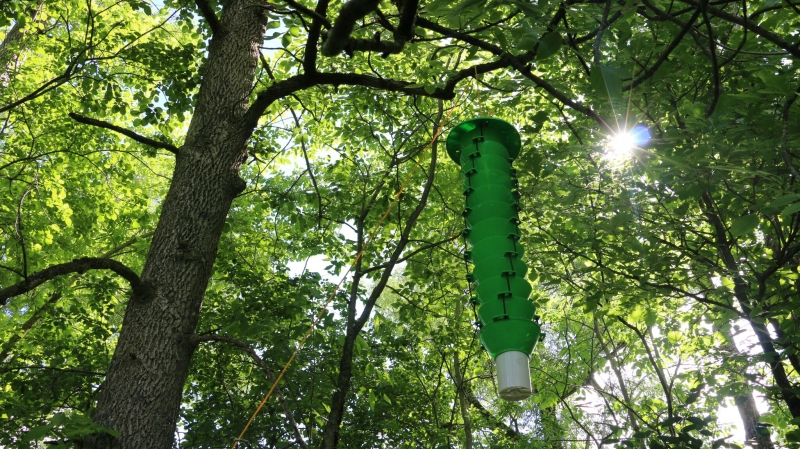 Traps like this one in Canton hang on ash trees across St. Lawrence County as part of an effort to monitor the spread of EAB. Photo: Jess LaMay.

It’s a rare blessing to have a job I absolutely love, but it’s not all roses. Although some of it is, literally, roses. All too often it is my dubious honor to bring to public awareness a new invasive pest or disease, and history has not always been kind to the bearers of bad news. There is an old saying that knowledge is power, but there is another one that ignorance is bliss, and some days I’d be happy to trade some alleged power for a little bliss.

Because the 5th annual New York State Invasive Species Awareness Week begins on Sunday, July 8. In New York it’s easy to be aware of invasive species since we have so many of them. Thanks to our early success creating a world-class sea port, and excellence in canal-building, NY has more invasive forest pests than any other state, and ranks in the top three for aquatic invasives. I guess the folks who set out to make NY the Empire State should have thought twice about trying to rank first in everything.

However, we are doing a lot right. New York State has funded six region-wide Partnerships for Regional Invasive Species Management (PRISMs), which pull together private and public groups to cooperate in the prevention and control of invasives. Jefferson County, and the parts of St. Lawrence and Lewis Counties outside the Adirondack Park boundary, fall within the St. Lawrence-Eastern lake Ontario (SLELO) PRISM, a well-organized and active partnership.

Some of the highlights of invasive lowlife include the new (2014) spotted lanternfly, which made its way to the US on a pallet of stones shipped from China to Pennsylvania. That’s right. Either Amazon Prime is out of control, or someone in PA was unaware that we had loads of rocks up here we could have sent them for way cheaper.

Although with its wings outstretched, the colorful lanternfly looks like a moth, it is neither moth nor fly, but rather a planthopper. These things work far too hard at sucking the sap out of trees, because they drain trees dry, often killing them. It prefers the Ailanthus tree, also from China, but these do not (yet) grow in northern NYS. However, they’ll settle for sugar maple, so we need to keep an eye out for lanternflies.

Anyone who remembers the Great Lakes before about 1985 knows what a dramatic change the tiny but prolific zebra mussel wrought. No more catching loads of perch and bass in a favorite weed bed. But on the other hand you can see like, fifty feet down. And more recently, the round goby and spiny water flea have taken some of the fun out of angling.

By now, most area residents know that in 2017, the emerald ash borer (EAB) was found in northwest Franklin County, and in several locations across St. Lawrence County. For such a destructive pest, the EAB is tiny—two of them fit end-to-end across a nickel with room to spare. It would be easy to overlook if not for its bright, metallic, emerald-green color with copper highlights.

The adult beetles themselves do little harm, but the juveniles are guilty of real delinquency. Immature EAB (larvae) feed on cambium tissue of ash trees, girdling and thus killing them. Aside from ash protected with insecticides (at some expense) through the estimated 15-year duration of EAB infestation, all ash trees in NY State will die.

During Invasive Species Awareness Week, people can take advantage of several events where kids and adults alike can learn more about the species affecting out region, and what we can do in response. Nature Up North, a local environmental outreach project affiliated with St. Lawrence University, will be at the Canton Farmers’ Market on Friday, July 13 from 10 AM to 1 PM, and again at the Potsdam Farmers’ Market on Saturday, July 14 during the same time slot. There will be literature available, as well as people to answer your questions, and even a giant talking bug. And on Thursday July 12 at Jacques Cartier State Park, Nature Up North and others will present an invasive species program at the beach pavilion from 7 to 8 PM.

Other Invasive Species Awareness Week events are listed on the website of SLELO PRISM at sleloinvasives.org, as well as the New York State Department of Environmental Conservation site at https://www.dec.ny.gov/animals/105650.html Find an event near you—the news may not be blissful, but taking action is better than sticking your head in the sand. And much less itchy.