Cattails: A Tale of Nine Lives 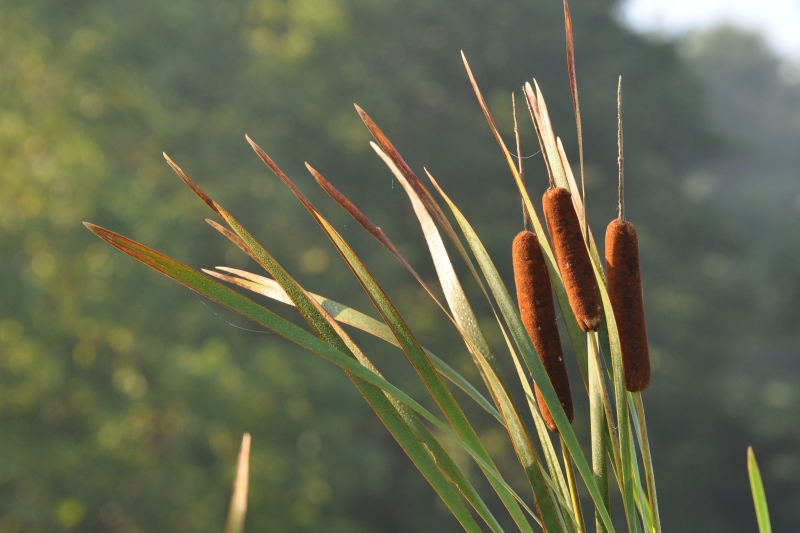 Cattails: A Tale of Nine Lives

The two cats at my place have endured life-threatening traumas such as falls, fights, and the compulsory “devotions” of small children. It’s amazing the hazards they can survive. Sadly, my contacts in the veterinary field continue to assert that cats have but a single life, and that the whole nine-lives thing is just a cat tale.

However, the story about cattails having at least nine lives is no yarn. An obligate wetland plant, the common cattail (Typha latifolia) is native to the Americas as well as to Europe, Africa and most of Asia—basically the planet minus Australia, all Pacific Islands and most Polar regions. It can be found growing along wetland margins and into water up to 30 inches deep, from hot climates to Canada’s Yukon Territory.

Its name comes from the brown puffy seed head it produces, which resembles a corn dog far more than a feline’s tail. But to avoid a global outbreak of incessant laughter, which could potentially slow the world economy for a few minutes, the World Bank pressured botanists to name the plant cattail instead of corn dog.

Aptly named or not, the cattail is truly a wonder of nature. As someone who likes to eat more than three meals a day, it makes sense that I first got acquainted with cattails through their culinary uses. The young shoots, sometimes called Cossack asparagus, are delicious raw or cooked, but definitely opt for cooking them if you’re unsure of the water purity.

The thick rhizomes or tuber-like roots are about 80% carbohydrates and between 3% and 8% protein, which is a better profile than some cultivated crops. Rhizomes can be baked, boiled, or dried and ground into flour.

In his book Stalking the Wild Asparagus, Euell Gibbons details how to process roots with water to extract starch, which I’d have to say works nicely. The starch, wet or powdered, is added to flour to enhance the nutrient value of foods like biscuits and pancakes.

What I like best are the flower spikes, which are two-tiered affairs having the male or staminate pollen-bearing spikes on top, and the thicker female or pistillate heads below. The male flower spikes wither away after they shed pollen, but the female spikes mature into the corn dogs – I mean cats’ tails – we all recognize. Both spikes are edible, but must be gathered just as they break out of their papery sheaths. Boil and eat with butter as you would corn on the cob. They taste just like chicken. Kidding. They’re similar to corn.

In the fall you can gather the tails and burn off the fluff to harvest the edible, oil-rich seeds. (Confession: due to my undiagnosed Laziness Syndrome I have not yet tried this.)

For years, my daughter and I sally forth (not her real name) in mid- to late June and gather bright yellow cattail pollen. Just slip a plastic bag over the flower head, shake a few times and you’re done. An acre of cattails can yield over three tons of cattail pollen, and at 6-7% protein, that’s a lot of nutritious flour. Substitute cattail pollen for up to one-fourth of the flour in any recipe. You can use more, but experiment on a small scale before you serve it to others (a tip from my kids).

OK, so that’s what, five lives? Euell Gibbons called cattail the supermarket of the swamp, and he wasn’t kidding. You can find thousands of articles and research papers on the uses of cattails. Technically that might not get us to nine lives yet, so let’s name some names.

Throughout cattail’s range, Native peoples for millennia have woven cattail leaves and flower stalks into roof thatch, sleeping mats, duck decoys, hats, dolls and other kids’ toys, to name but a few uses. Fresh leaves and roots were pounded and used as poultices on boils. Cattail fluff was used as diaper linings, moccasin insulation and wound dressings.

Today, cattail swamps are created by engineers for the treatment of wastewater, and artisans make paper from cattail leaves. Kids still have fun playing with the leaves, and especially the mature cats’ tails. Here’s to the many lives of the cattail.

Maybe some social-media influencers could lead a campaign to dub this amazing plant the corn-dog tail. The world could use a good fit of laughter right now.

If you're interested in learning how to make cattail pancakes, check out this past blog: https://natureupnorth.org/justmynature/india-harvey/wild-eats-episode-3-cattails

Things that I did not know!

This is extremely interesting! I did not know this. I am thinking of trying some of these suggestions but I also suffer from the elusive "Laziness Syndrome"! Thank you for the information.

I enjoyed your clever play on words in this article. Learning new things about cattails has never been so entertaining!