An Army of Legs 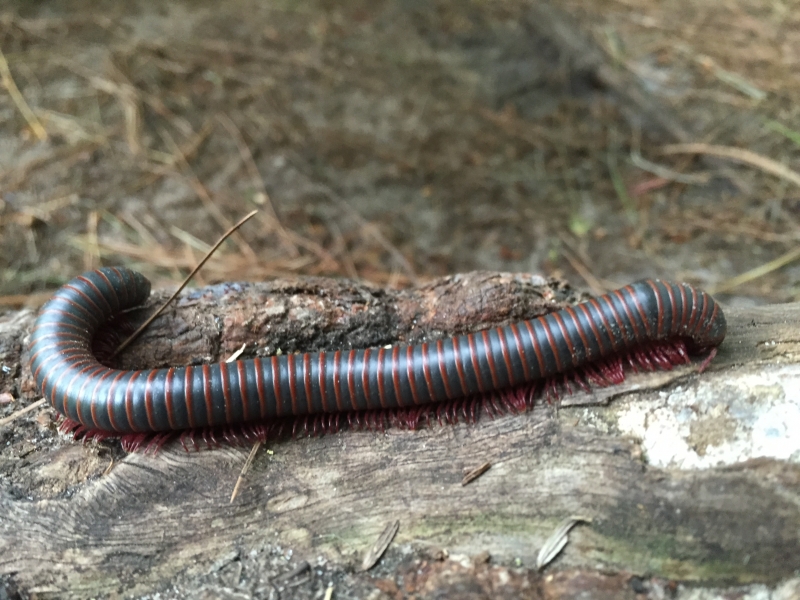 An Army of Legs

Whether one has owned a pet cat, dog, chinchilla or what-have-you, or merely admired the grace and beauty of a horse or deer, most of us develop positive links with at least one four-legged animal. But for everyone except maybe scientists, warm and fuzzy feelings evaporate when you move up to critters with a thousand or more legs.

Insects, all of which have six legs, seldom elicit an oxytocin feel-good rush. I mean it’s unusual for folks to get doe-eyed over a mosquito, yellow jacket or cucumber beetle. On the whole, though, insects are nowhere near as creepy as eight-legged beasties. The term arachnid, I’m pretty sure, is Latin for “things with too many legs for my comfort level.” It includes ticks, which can transmit around a dozen serious illnesses to humans, as well as spiders. These latter, of which humans seem to have an innate fear, are by my estimation equal parts by weight of legs, eyes and hairs.

As if eight appendages weren’t enough, the forces of nature saw fit to make invertebrates with loads more. Centipedes are a great example of un-cuteness. While their name means “hundred legs,” they can have anywhere from thirty to almost 300. They have a pair of long spindly legs per body segment, and reportedly all have an odd number of segments. This means you’ll never find a centipede with exactly a hundred legs – so much for truth in advertising.

Carnivorous, venomous, and fast-moving, centipedes are way up there on the creepiness index even though they pose no danger to us. These somewhat flattened, soft-bodied predators sometimes invade homes. Typically, they clear one’s living space of things like spiders, cockroaches, peace of mind, and restful sleep. If you find such characters indoors, the best way to get rid of them is to eliminate whatever crawly things the centipedes are eating.

At the time when biologists named millipedes, a word meaning “thousand legs,” it was well-known that these elongate, slender, hard-shelled arthropods did not have that many limbs. It’s just that there wasn’t a concise Latin name for “several hundred but they’re real small and we keep losing count.” Unlike the bloodthirsty centipedes, millipedes are detritivores, eating rotten stuff like decayed leaves and wood, and fungi as well. They are highly beneficial in gardens and compost piles. Once in a while, millipedes briefly show up in houses during weather extremes, especially in times of drought but also after extended rainy periods.

In our region, millipedes tend to be quite small, from less than a half-inch long to perhaps 1.4 inches or three centimetres. Just south of us, the American giant millipede can reach about four inches or ten cm in length. Not surprisingly, this species is moving northward out of its historic range in the US mid-Atlantic states.

On December 21, 2021, livescience.com reported on a fossilized millipede found in the UK dating back 326 million years to the Carboniferous Period. Researchers estimate that the individual they unearthed was roughly 8.5 feet long (2.6 metres) and in the flesh would have weighed approximately 110 pounds (50 kg). For sure this thing would make a real dent in your compost pile.

In terms of living novelties, a millipede actually having a thousand legs was discovered in Australia in December 2021. This newly found species, Eumillipes persephone, is only about 0.04 inches (0.9 mm) across and 3.74 inches (95 mm) long, but they get the stride prize. After taking enough Adderall (I assume), a researcher was able to count the legs on a single specimen; all 1,306 of them. Sure hope this species isn’t prone to joint pain. The blind, fungus-grazing millipedes were found deep underground – as much as 197 feet or 60 metres down – in a number of exploratory boreholes drilled by mining companies years ago. As organic matter falls down the boreholes and decays, Eumillipes persephone munches the fungi that colonize the detritus.

Unable to bite or sting, millipedes are very docile. When I was a kid, I thought it was neat how they coiled up like a watch spring if disturbed. It turns out they make good pets, as they are easy to care for and can live five or more years in captivity. Some pet stores hawk African giant millipedes, which can get ten inches or twenty-five cm long. I’m all for low-maintenance pets, but without fur, body heat and expressive eyes, I’m not sure I could emotionally bond with such a leggy animal.

Paul Hetzler, a former Cornell Cooperative Extension Educator, has a dog but is still looking for the right arthropod.

Merci millipede fois to my friend Laurent Dubois of Masham, QC for kicking this idea my way.