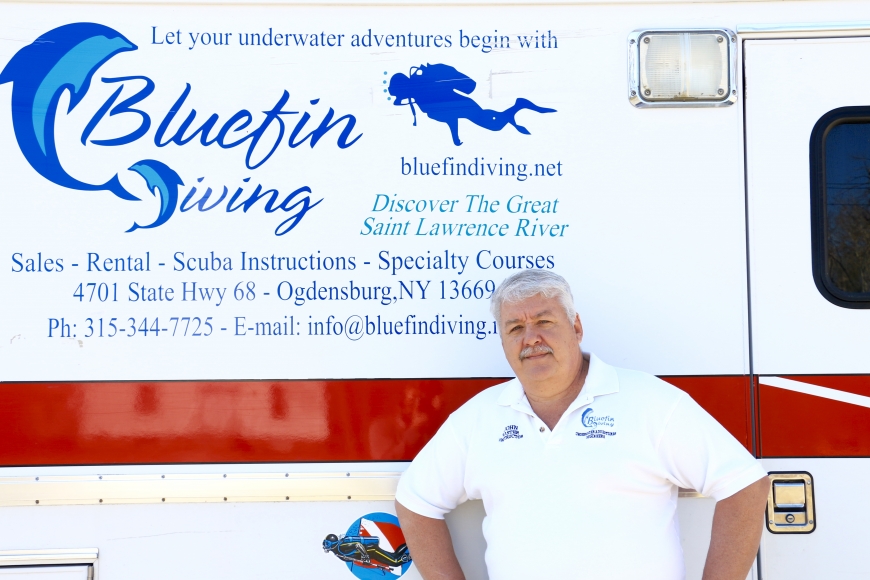 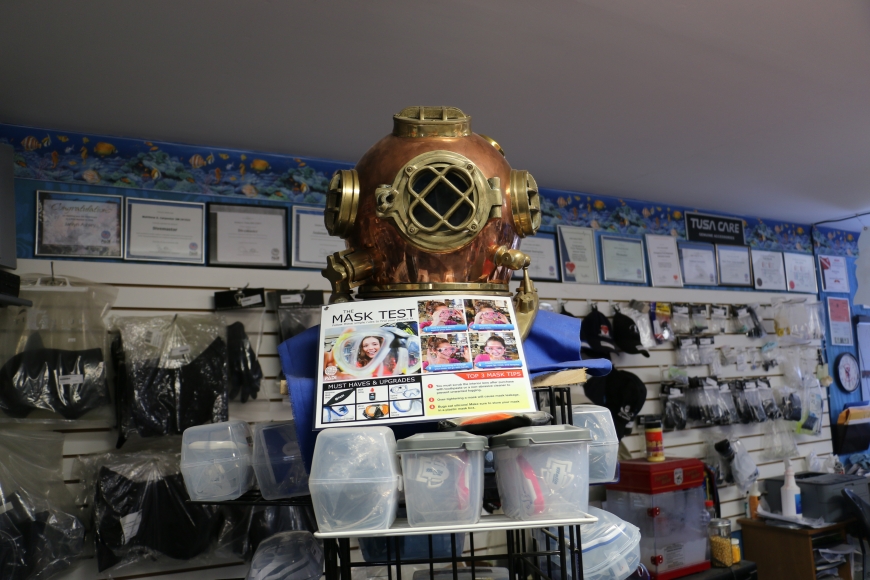 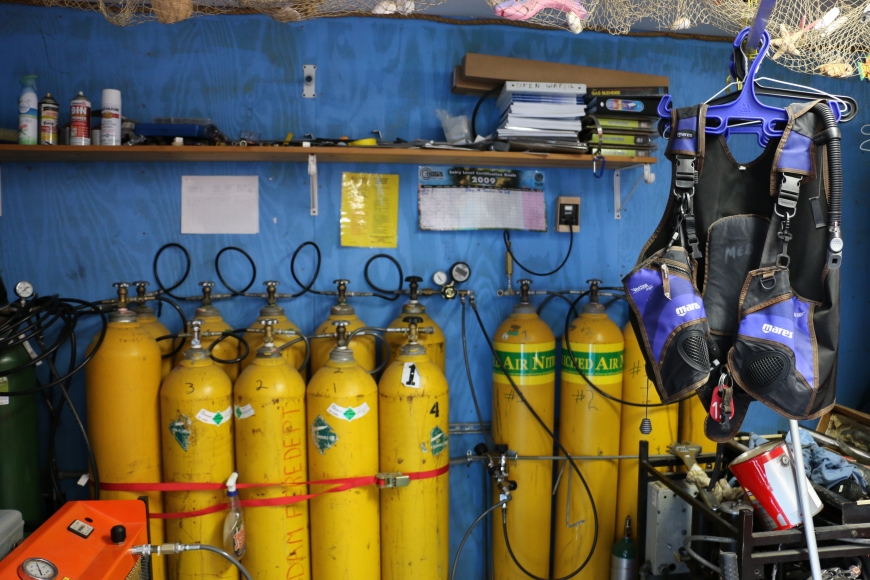 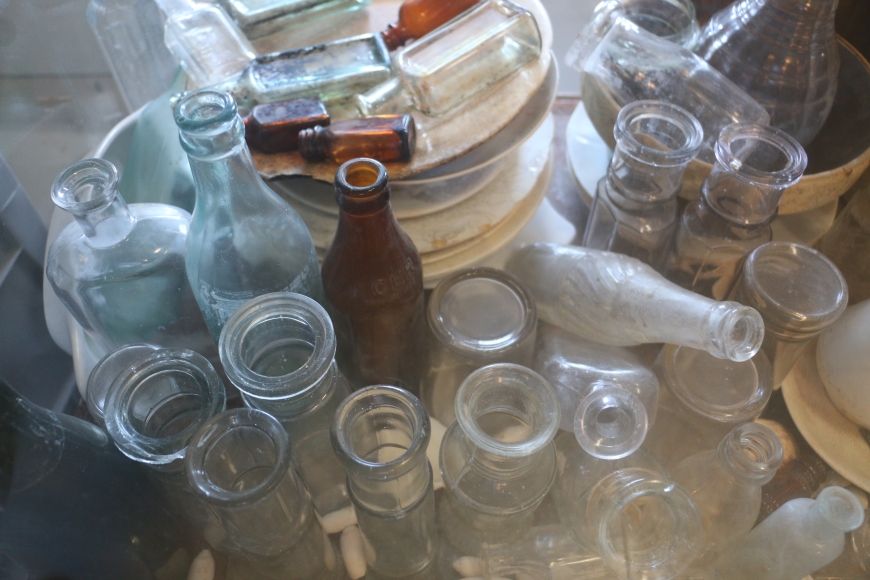 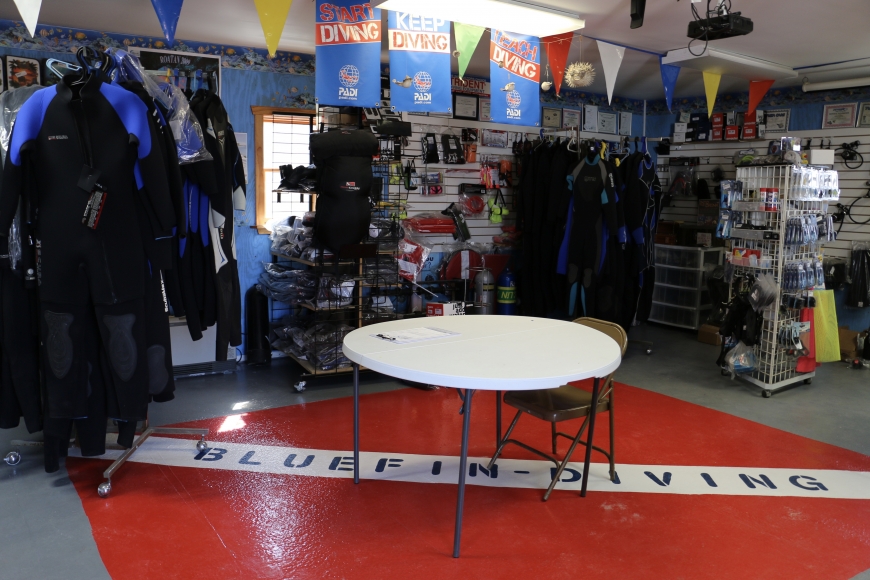 Trash or treasure? John Ashley's collection of glass from the bottom of the St. Lawrence River. Photo: Justin Dalaba

John Ashley is a SCUBA instructor and the owner of Bluefin Diving, a SCUBA diving shop in Ogdensburg. A North Country native, he has been diving  in the St. Lawrence River for over 20 years, including winter dives beneath the ice. We caught up with him to learn more about the life of a diver and scuba instructor in our northern climate.

Nature Up North:  How did you get into SCUBA diving?

John Ashley:  To make a long story short, when our house burned back in 1989, we moved out here and I joined the local fire department.  Well, they were starting a dive team and I really didn’t want to do it but my buddy wanted to do it so he said let’s go take it and I did it with him.  So after that, I liked it and I just kept going.  We went up to assistant instructor, me and him.  Then he stopped and I just kept going.  So I’m a master instructor, I’ve been a master instructor now for 4 years.  That’s the highest-level instructor you can go.  After that is a course director, and I don’t forsee myself going that far because of expenses and it’s not cost-effective for me.

This interview has been edited for length and clarity.

NUN:  What does the North Country mean to you?

JA:  The North Country means a lot in the aspect of, it’s a slow pace up here.  It’s not like the cities where everything is rush rush rush.  If you want to slow down and take your time you can.  If you want to rush, you can.  So I think we have it over the city, actually.  In the aspect of, look what we have around us.  Good people and everything else.

NUN:  Do you have a favorite place in the North Country?

JA:  The St. Lawrence River is nice.  I’m a little discouraged about what Montreal was doing, dumping the raw sewage in there, which is… you know, both sides of the border own that river, I don’t know why they keep doing it.  I’d like to see it stopped.  It effects everything, the ecosystem.  A lot of them say it’s downstream.  Fish don’t stay downstream, they still travel up.  We’re starting to see more and more diseased fish, and less of ‘em.  So it’s effecting the ecosystem.

NUN:  Could you tell me about an average day on the job?

JA:  I answer the phone a lot.  A lot of people have questions about diving up in the North Country and that.  I prepare for the classes, fill tanks, work on regulators, work on air compressors… that’s about mostly what I do.  So I stay pretty busy with the shop and stuff.

NUN:  You teach a lot of classes.  About how many do you certify each year?

JA:  Roughly about 400 per year, it is seasonal up here for us and that’s actually a very high number for the North Country.  I’m about the only shop within 80 miles radius.  So that’s pretty good for up here, for being very seasonal.

NUN:  You definitely have a unique business and it seems like you have your niche here.

JA:  I teach in all four colleges, it’s a lot of fun.  We really enjoy that.  I have another instructor that helps me, Todd Moody, and we have a lot of fun.

NUN:  What do you enjoy most about SCUBA diving?

JA:  Actually, seeing and teaching new students is the most enjoyable.  Even children, like in the 10-14 year range.  Even the college students, because when they were growing up; what was the first thing their mother said?  You can’t breathe underwater.  Well guess what?  We can.  And to see the smile on their face and the joy in them saying, ‘Oh my god, this is great,’ you know that’s about the best accomplishment there is.

NUN:  And you do it year-round too.  You do ice diving and all that.

NUN:  So you seem concerned with some of the environmental impacts on the St. Lawrence River, but other than that, how do you think your job relates to the environment?

JA:  We did fish ID classes, we do project AWARE.  Actually, Clarkson University wants to do one this year where we go in and start cleaning up the river.  Everything has to be logged of what we take out and then we send it in to PADI, the Professional Association of Dive Instructors, for records.  They keep track of everything we pull out.  A lot of people throw their junk in there.  Back in the day, and I’m gonna say back in the 1700s until they started making landfills, people along the river use to throw their junk in the river.  Well a lot of that junk now is antiques and we found a lot of antiques in that river worth a lot of money.  So that helps the environment too by cleaning it up and removing stuff.

NUN:  And I know you have a new wreck you’re going to uncover this summer.

JA:  Hopefully we’re gonna try to do that.  We’ve gotta get some permits.  They don’t really care for us to start messing around with the bottom.  But that… We’ve got a partial date of it back to the early 1700s, where they used to make boats in Ogdensberg, so that’s gonna be a pretty good discovery.

NUN:  Where do you see SCUBA diving heading in the future and in particular in the North Country because it seems like it’s been a growing interest among students and others?

JA:  It’s been a very growing industry, the average age now, from what the polls say from PADI, is actually the younger generation.  People want to explore something that hasn’t been explored and two thirds of the world is covered with water, but there’s only one-third that’s actually seen it.  So people wanna see stuff.  It’s amazing what you see.  We do travels every year and we bring new people every year.  As soon as they get hooked, they’re with us a lifetime… where you going next?  When are you diving next, because we all have fun.

This interview has been edited for length and clarity. 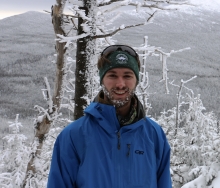 Justin loves exploring the outdoors in a multitude of ways and he feels most connected through photography, hiking, fishing, running and cycling. He hopes to translate his passion for nature and conservation onto others while working as an intern for Nature Up North.