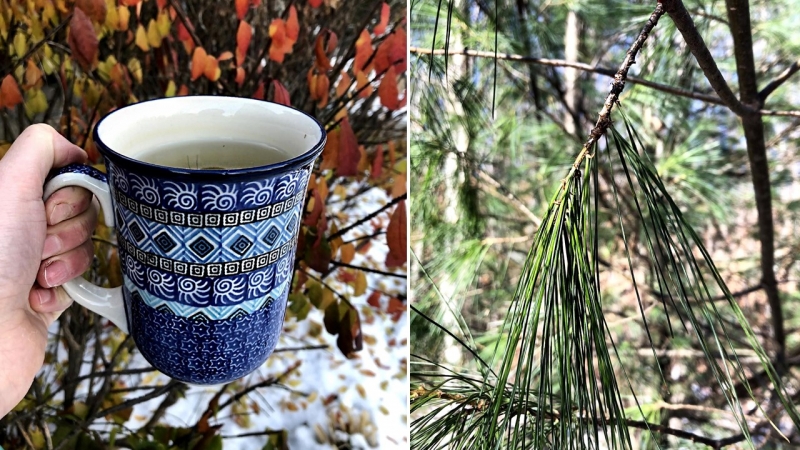 Have you ever wandered through the woods, looked at all the plants surrounding you, and wondered, “are any of these edible?” Good news: there are many species of edible plants found in the wild all around us! With a little knowledge of how to identify and prepare wild edibles, local forests become a bountiful place to explore.

In the late fall and winter, after deciduous trees and shrubs have lost their foliage, foraging becomes a little trickier. But the woods still hold sources of nutrition, if you know where to look. Pine trees, birch trees, and rose bushes are three easy-to-identify plants whose needles, twigs, and buds can be made into tasty teas that will keep you warm in the depths of winter.

As a commonly found group of trees, pines are a great place to start brewing tea. Many different species of pine can be used for tea-- Eastern white pine is a good choice, but other options include balsam fir and eastern hemlock. Feel free to experiment with other varieties, but make sure to do your research because not all conifers can be made into tea, and some species found in the Western US can be toxic. 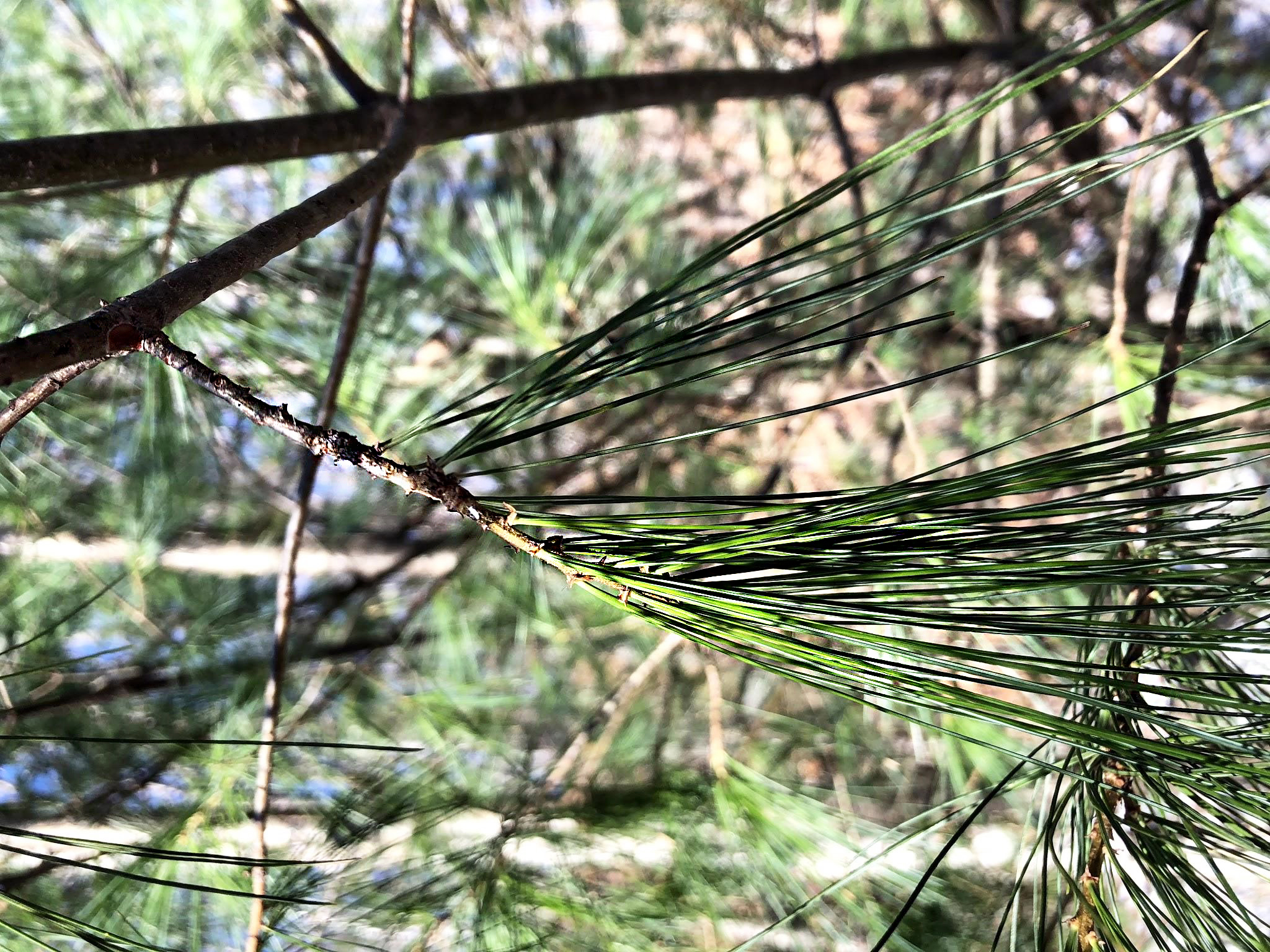 We’ll begin with white pines. They can be identified by their needles, with 5 needles per bundle (tip: 5 letters in the word “white” = 5 needles in each bundle!). When collecting needles, younger and greener needles are better because they more easily release flavor and vitamins into the tea. For the best flavor, make sure to pick needles straight from the tree, not from needles on the ground.

Collect a heaping handful of needles and remove the brown husk from the ends. Begin boiling water, and as it heats up, chop the needles into pieces as small as possible-- the smaller the better for Vitamin C absorption. Once the water has boiled, pour it over your prepared needles and steep the needles as you would with a tea bag. Alternatively, you can boil the needles along with the water. This will give your tea a stronger, more bitter flavor, a deeper yellow color, and more vitamin content. Use roughly between a teaspoon and a tablespoon of needles per 8 oz of water. Some may consider the flavor of pine needle tea a touch bitter so you may choose to add honey for flavoring.

Pine needle tea has many medicinal uses, including treating colds as an expectorant and a decongestant. Once cooled, it can be poured over minor wounds as an antiseptic, and its high vitamin C content will boost your immune system during the dark winter months, staving off the sniffles. It is a very useful tea and a great introduction to foraging for edible plants, especially during the late fall and winter months.

Another warm and soothing tea that can be made from wild foraged plants is birch tea! The twigs of black and yellow birches can be used for this concoction-- black birches will give you a stronger flavor, but yellow birches are more commonly found in the North Country. They have a strong and soothing wintergreen flavor that goes nicely with milk and honey. 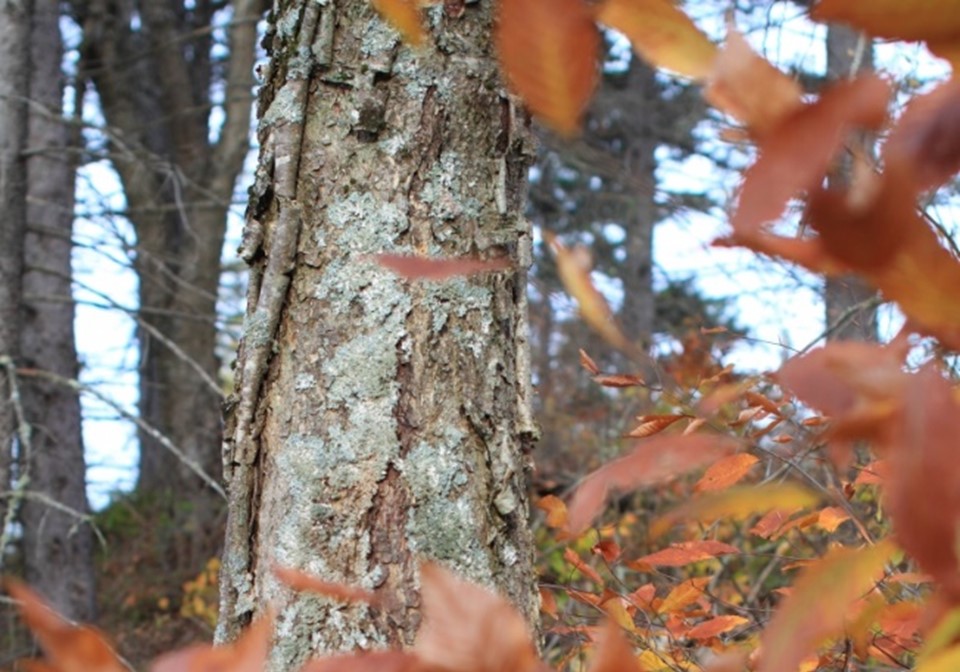 To identify a young black birch, look for a tree with reddish brown or black bark. The bark should also have lighter colored horizontal dashes called lenticels. In mature birches, the bark will be dark brown or black, and broken up into scales and plates.

To identify a yellow birch, look for a tree with light yellow-gray, paper-like bark, peeling off in tiny curling strips. It has similar bark to a paper birch, but the main distinguishing factor is that paper birch has white or light gray bark that peels off in wide, thick strips with a pink underside. When in doubt, snap off a twig-- it should give off a strong wintergreen smell, whether it is a black or yellow birch.

Collect a half-gallon jar full of small twigs from the trees. Be careful not to collect more than a handful from one branch to allow the tree to stay healthy. Boil water, then add the twigs in one-inch segments. If they are added to the water when it is too hot, the aromatic essential oils will evaporate, so allow the water to cool slightly before adding twigs. Steep until the water is completely cool (overnight works best for maximum flavor), then reheat and add milk and sweetener to taste. Local honey is a great option to reduce allergies and further boost the immune system.

Traditionally, birch bark has been used to treat fevers and stomach upsets, reduce swelling, clear skin, and detoxify the body. Another fun use for birch twigs is as nature’s toothbrush-- if you bite the end of a twig into a bristle, the minty fresh taste will freshen your breath. It even contains xylitol, which is added into modern toothpaste to prevent bacteria and plaque on teeth.

If you’re looking for a fruitier taste in your wild edible tea, look no further than rose hips. Rose hips are the seed of the rose plant, and are best harvested after the first frost. They can be found throughout the winter months as well, but just after the first frost, they become less bitter and more juicy. 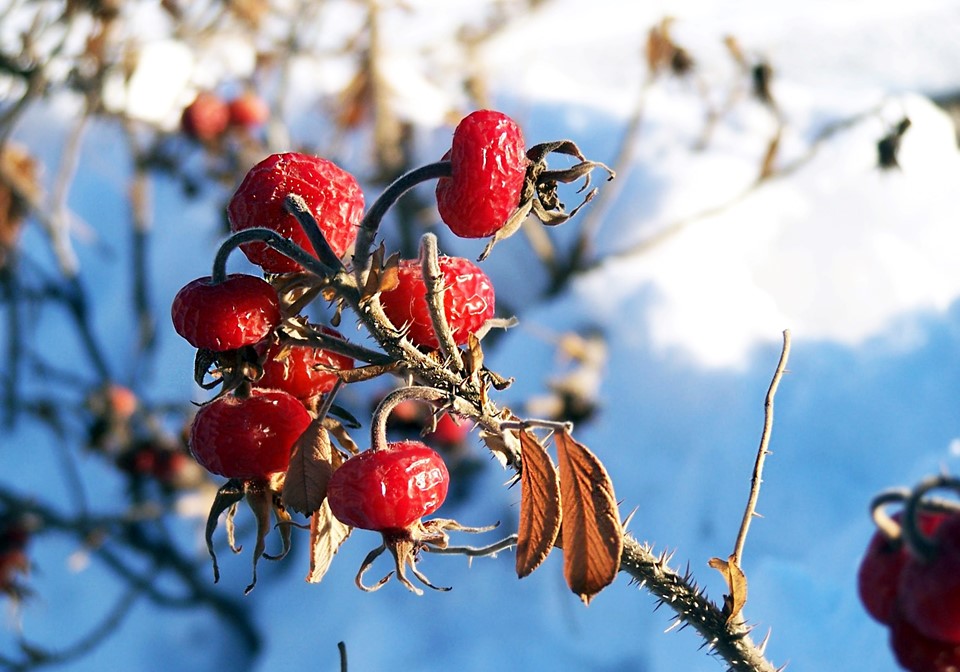 To identify rose hips, look for a thorny rose bush with red or orange oval-shaped berries, with wisps protruding from the bottom. They are about the size of a large blueberry, and can be found both in the wild and in many home gardens. The hips should be soft to the touch and easy to remove from the rose bush. Take a few handfuls from the bush; they’re easy to dry and store for future use.

To prepare, first trim the stem and blossom ends off the fruit, then slice the rose hip in half and remove the inner seeds. If using fresh hips, chop them finely. Boil water, then steep 4-8 rose hips for 5-10 minutes. The tea will have a mild tangy taste, similar to cranberries, and you can add sweetener to taste. Rose hips contain high concentrations of Vitamin C, E and A to chase away the winter blues, and have traditionally been used to soothe stomachs, fevers, and increase blood flow to the limbs-- helpful on a cold day. Rose hips can also be made into tasty jams and jellies. 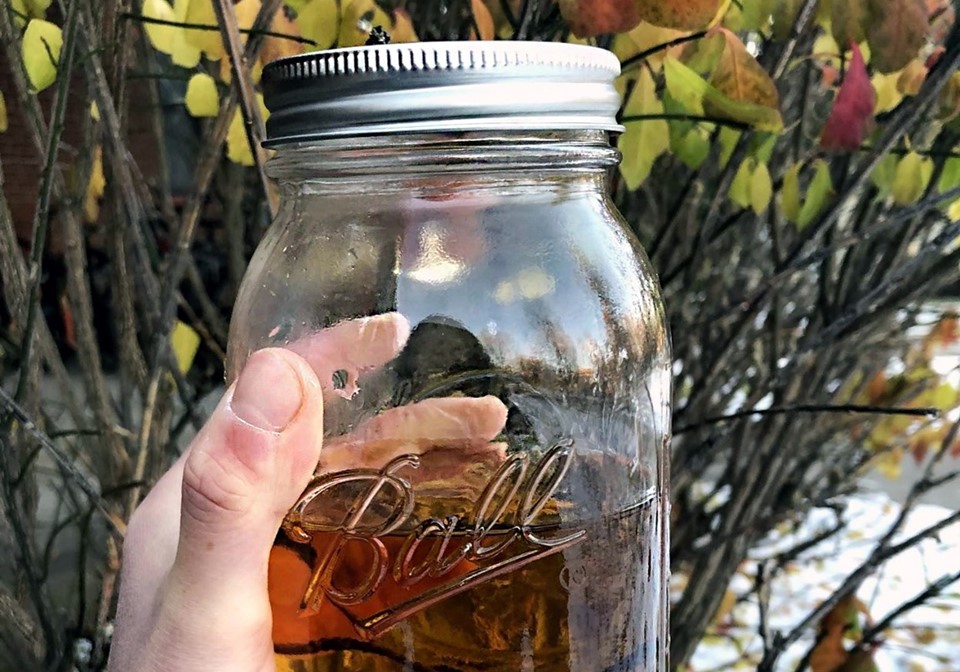 If brewing teas has piqued your interest in wild edible plants, there are many resources available for you to check out. Some of my favorites and recommendations from our Nature Up North team are listed below. Go forth and forage!

All photography by Isabella de Buy Wenniger, unless otherwise noted. 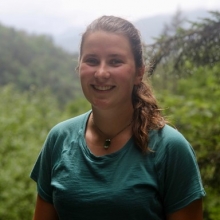 Izzy de Buy Wenniger is a sophomore at St. Lawrence University majoring in Environmental Studies and Philosophy, and minoring in Outdoor Studies. She is originally from the flatlands of Topsfield, Massachusetts but escapes to the mountains and rivers of VT, NH, and NY as often as possible. Izzy is an avid skier, hiker, climber, and summit snack enthusiast and a current Digital Media Intern at Nature Up North.

These are awesome recipes! A lot of people don't recognize that the fall and winter seasons still have plenty of life to them and many different aspects to explore, so brewing your own wild tea seems like a great way to realize that. I definitely want to try these out this coming winter!