The Story Behind the Monthly Climate Action Vigil in Canton 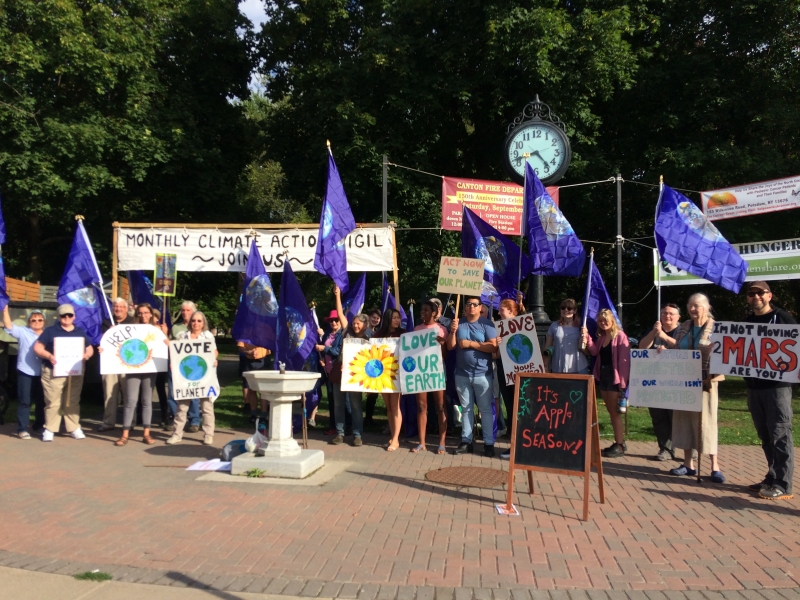 The Story Behind the Monthly Climate Action Vigil in Canton

Once a month, a group of people stand on the corner of the local park, a handmade sign reading “Monthly Climate Action Vigil, Join Us!” erected behind them. People as young as 12 and as old as 86 hold signs or flags protesting the climate crisis. Some give speeches, some lead chants. Others interact with people walking down the street, encouraging them to get involved in climate action. But our group has a singular vision: we are protesting the continuation of the climate crisis.

The first Friday of September was the seventh Monthly Climate Action Vigil in Canton, NY Village Park. The vigil focuses on the existential crisis of climate change, and we are protesting consistent government inaction and corruption. From pulling out of the Paris Agreement to lowering regulations on oil and gas companies, we are forced to watch in horror as the government not only refuses to act on climate change, but is bringing it on more quickly. With less than twelve years to fight climate change effectively, it is frustrating to watch those in power deny it is happening. 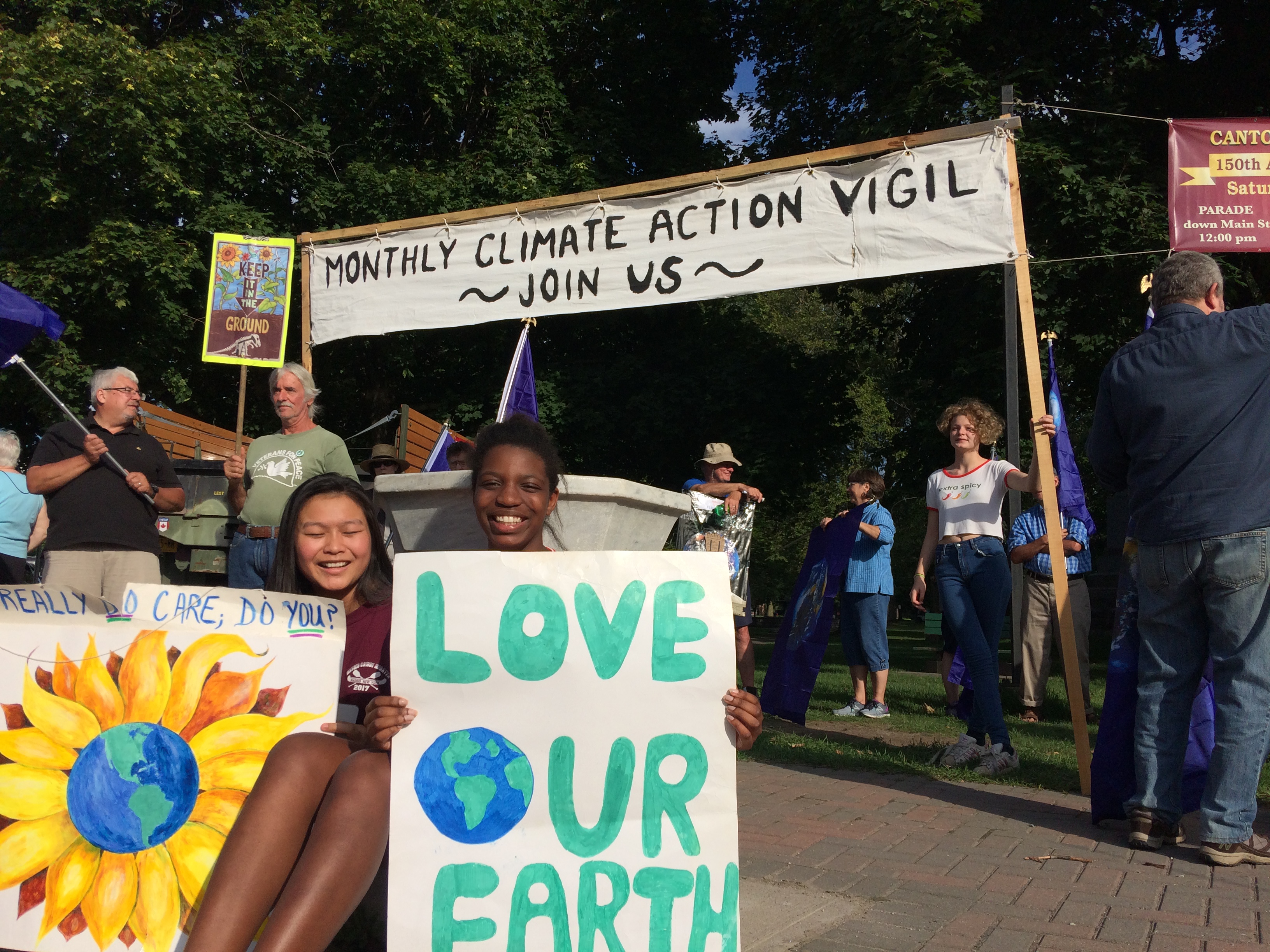 Last fall when I learned about the Juliana vs. US Government case confronting the climate crisis, I began to get involved. In the case, 21 youths between the ages of eleven to twenty are suing the government for inaction on climate change, arguing that it interferes with our generations’ right to life, liberty, and property. Environmental groups around the country rallied together in support of the case, which still awaits a ruling. 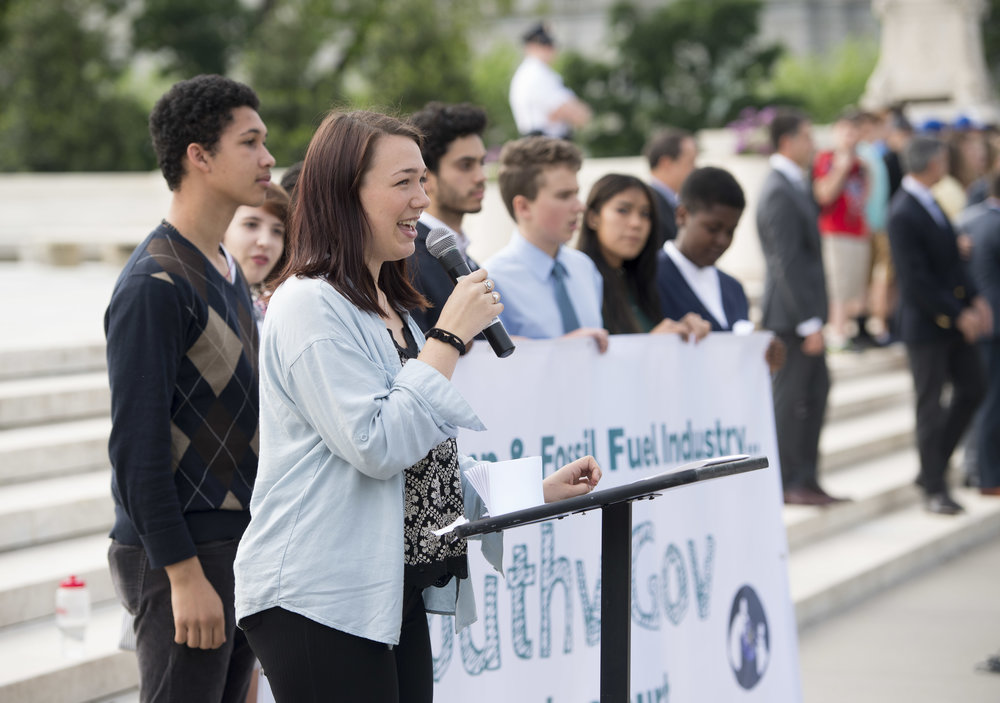 Kelsey Juliana, the lead plaintiff in the case, speaks outside the US Supreme Court, April 2017. Photo: Robin Loznak, ourchildrenstrust.org

After learning about the threat of climate change, I felt so powerless to do anything about it. Last year,  I spoke at a small rally in the Canton park on a rainy, early November afternoon. I attend high school at Little River Community School in Canton, and my principal and mentor, Steve Molnar, proposed that we start a larger and more constant rally for climate action once a month. Steve offered me an internship on the project if I helped organize it. I  readily accepted the opportunity to raise awareness, and to do something tangible to combat this growing crisis.

I helped organize our first vigil in March 2019. Since then we have met with multiple local groups and churches to raise awareness about both the vigils and the climate crisis. For September, we provided twenty large blue earth flags for people to wave. More than 35 people came to hold flags and signs, show their support, and call for government action on the climate crisis.

In September I gave a speech about the fires in the Amazon rainforest, I also called to action the many people who, while acknowledging that the climate crisis is an issue, do absolutely nothing about it. We all have a role to play to save our planet, and we have to work together if we want to see real change. Knowing that climate change is happening but absolving all responsibility for our own actions that cause it will ultimately lead to our downfall as a species.

We are at a tipping point in our world history; we will either do what is necessary and stop abusing our planet, or we will let it happen. This is our responsibility, this is our fight. If those in power won’t do what is needed to combat the climate crisis, it is our job to demand they do, or vote someone in who will. And that’s where this vigil comes in.

The vigil is both a protest of our inactive government and a mourning of the tragedies that have taken place against our planet. We need to recognize what we have done as a species to our planet and refuse to let it go any further. You can join! Help us raise awareness, create support, and show our local and national governments that there are a growing number of people demanding climate action. We are the sparks that will create real change.

The next vigil is this Friday, October 4th at 4:00 pm in Canton. I hope to see you there.

The Monthly Climate Action Vigil occurs on the first Friday of every month at the Canton Village Park. Local environmental groups and activists started this ongoing vigil to call attention to the urgent need to prevent and mitigate the effects of climate change. Everyone is welcome to join. For more information write climateactionvigil@gmail.com.