Large Predators: Who Lives in Northern New York and Who Once Did? 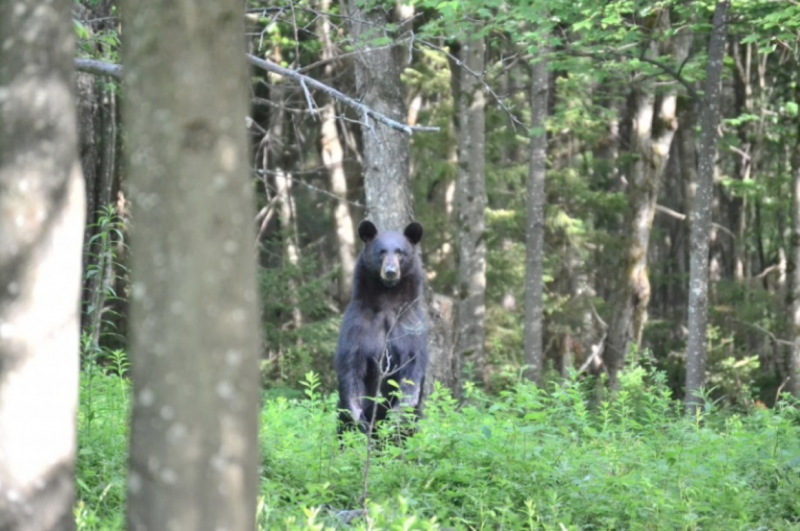 Large Predators: Who Lives in Northern New York and Who Once Did?

What comes to mind when you think of a large predator? Maybe a powerful lion? Or a burly bear? Did you know that the Adirondacks and all of New York State were once home to a variety of top predators, including cougars, wolves, wolverines, lynx and black bears? Out of these five species, only one is still present here today… maybe you’ve seen it. That’s right, the only remaining top predator in New York State is the black bear (Ursus americanus). Sadly, early settlers clashed with these other large species and they were hunted down until populations no longer existed in New York State or much of the country. This local extinction process is defined as extirpation.

First, let’s talk about a few common misconceptions - although the eastern cougar (Puma concolor) (also called mountain lion or catamount) is extinct in New York, it is not unheard of to sight cougars traveling within the region. The map below pinpoints 2 confirmed cougar sightings within the Adirondack Park, the most recent being in 2010. 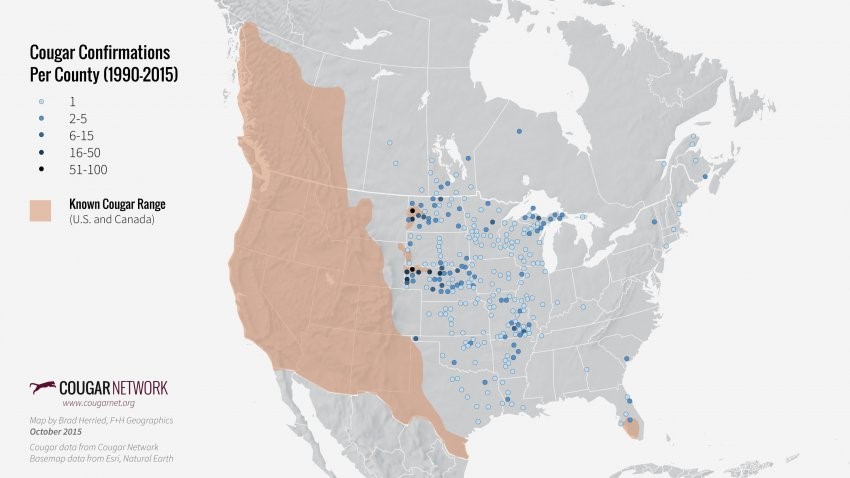 Although male cougars have been sighted wandering through the eastern states, there is not an established population here. To have a population there must be females raising kittens. There have been no sightings of female cougars raising kittens east of Missouri and the Michigan Upper Peninsula in the last 100 years. According to the New York Department of Environmental Conservation (DEC), bobcats, fishers, coyotes, and domestic cats and dogs can easily be mistaken for cougars. 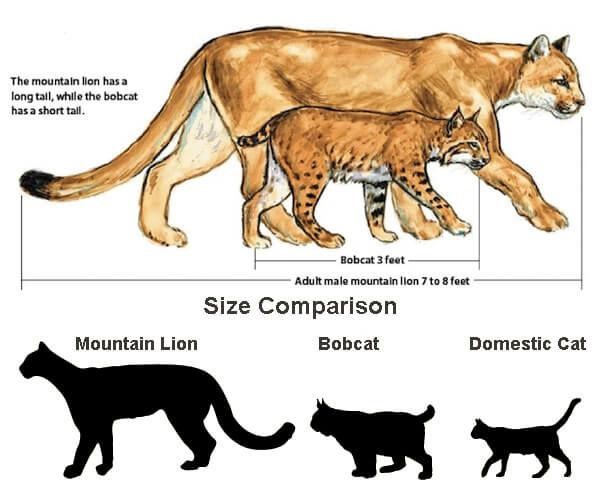 The DEC’s website advises that if you think you have seen a mountain lion you should try to take photos and check for tracks or scat. When photographing tracks, lay a quarter or a ruler beside the track to serve as a scale and make it easier tell what size the track is. I’ve inserted a chart on prints below for reference. 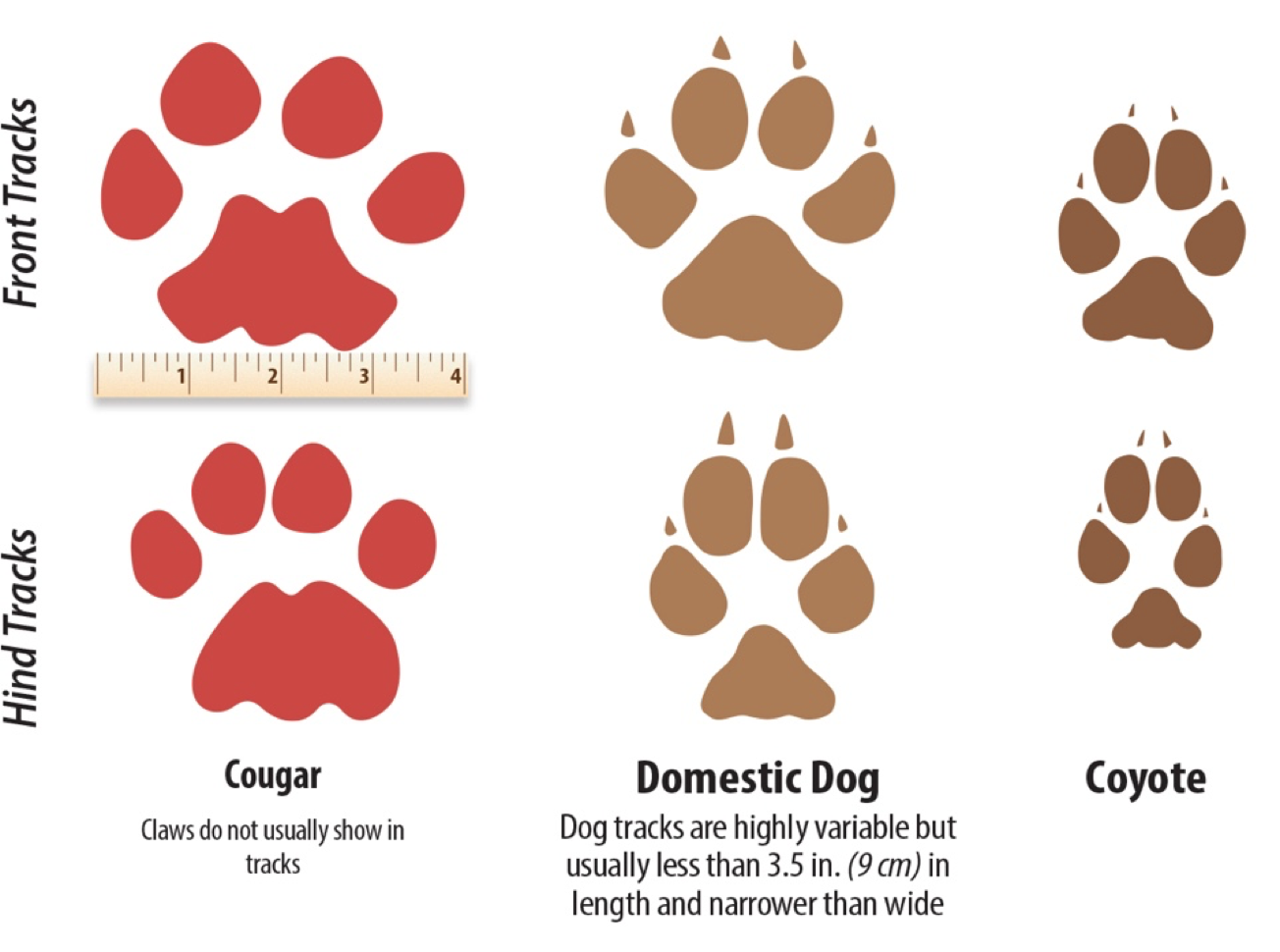 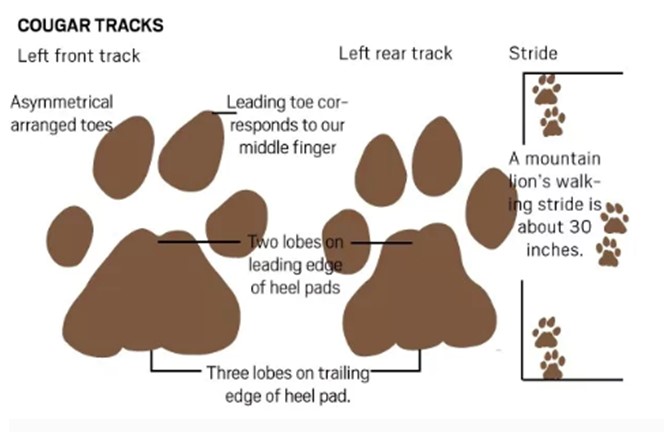 Let’s take a moment to talk about the difference between feline and canine prints. First, notice that both coyote and dog tracks have claw marks; felines are able to retract/bring their claws in whereas canines cannot. Among canine prints, claw marks will always be present. Next, let's talk about the pad shape. It is easy to notice in this image that the feline prints are wider, and the individual pads are wider than the canine pads. It is hard to identify tracks correctly, so if you see an interesting paw print snap a picture so you can examine it more closely later!

Now onto our next large predator, the wolf. Wolves disappeared from New York State in the 1800s a result of habitat destruction and unregulated hunting.

Gray wolves (Canis lupus) are currently listed as endangered in the lower 48 states. However, populations have greatly rebounded in the Great Lakes region- Minnesota, Wisconsin and Michigan's Upper Peninsula, with the population in that region reaching 4,500 as of 2015. Additionally, Canada is home to tens of thousands of wolves. Despite evidence that there are no wolves in New York, some may say… “Wait but I thought that I had seen a wolf here”. It is not uncommon to mistake an eastern coyote (Canis latrans) or even a dog (Canis familiaris) for an eastern gray wolf (Canis lupus). Actually, our coyote populations here in New York State are part wolf! Genetic testing confirms that the northeastern coyote shares a small amount of DNA with gray wolf populations.  We often hear them referred to as a coywolf, meaning coyote-wolf hybrid. 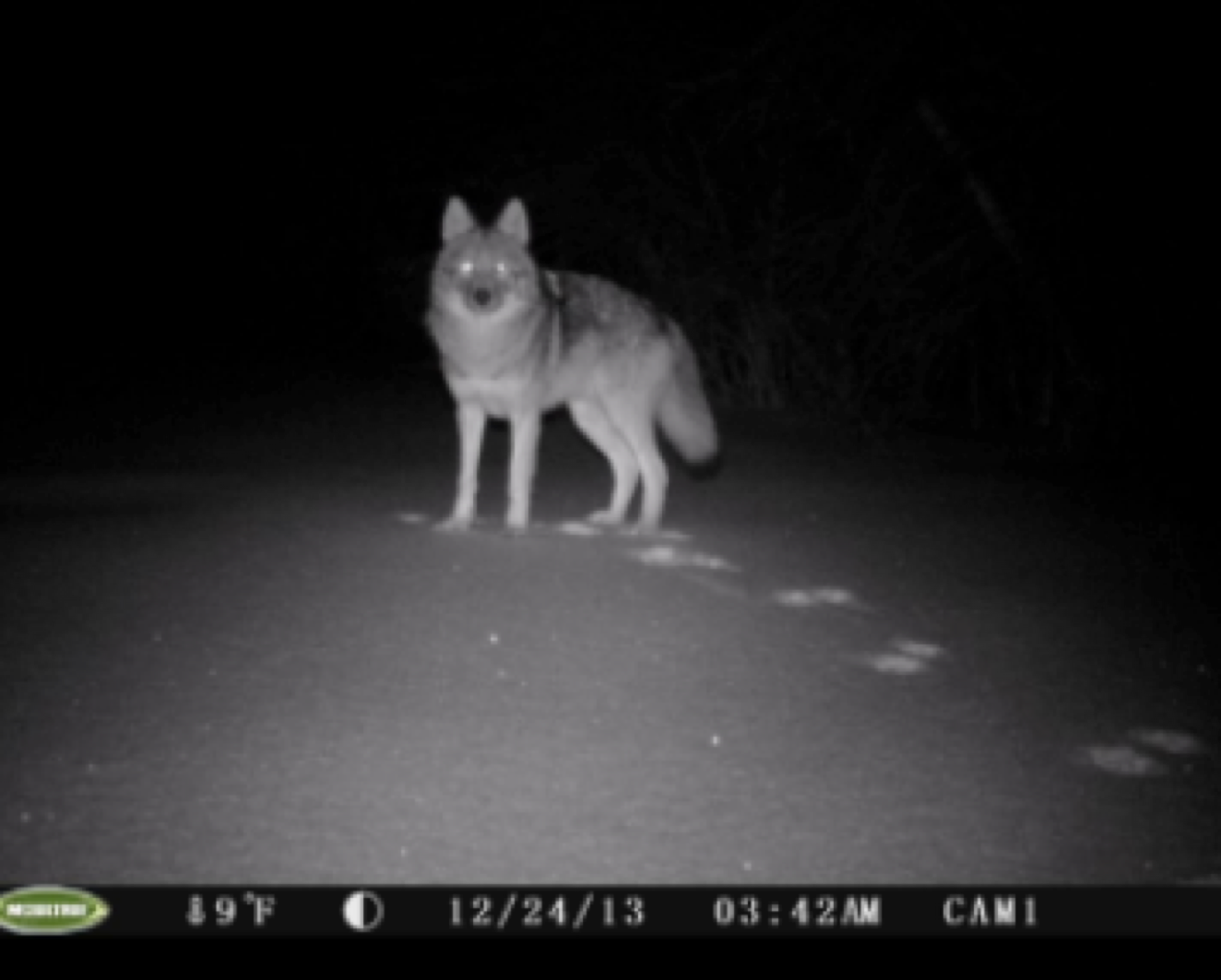 There is also confusion between Canadian lynx (Lynx canadensis) and bobcats (Lynx rufus).   Although similar in appearance, lynx and bobcat are separate species within the same family. Canadian lynx are medium-sized cats with long ear tufts, a flared facial ruff, and a bobbed tail with a black tip. Canadian lynx weigh 20-39 pounds and 30-36 inches long from head to body with a 2-4inch tail. In contrast, bobcats have shorter ear tufts, the tip of their tail is black on top and white underneath, and they have shorter legs and smaller feet. Bobcats weigh 15-35 pounds and are approximately 30 inches from head to body with a 6inch tail. 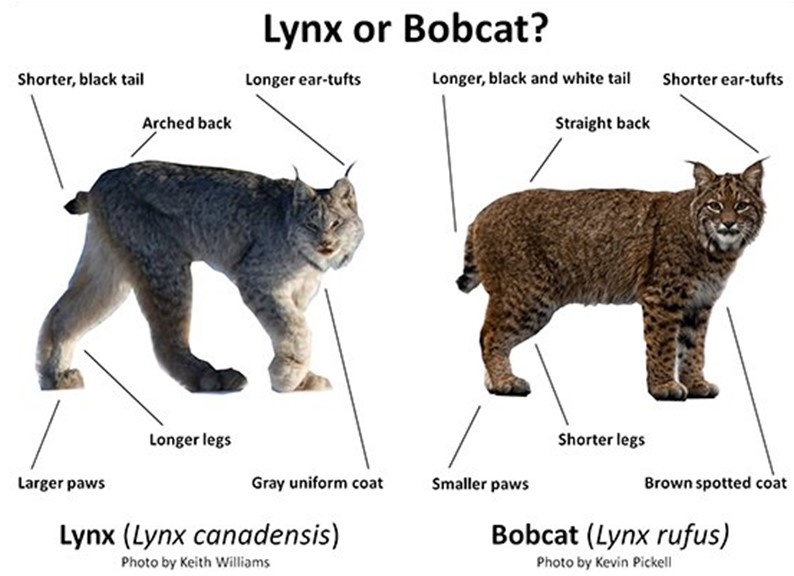 Additionally, lynx are less common than bobcats; they mostly inhabit northern states along the Canadian border, excluding New York. On the other hand, bobcats range across the entire lower 48 states.

Similar to mountain lions, lone lynx have been sighted wandering through New York. However, because there are no lynx breeding in the state, New York does not have an established population

Once inhabitants of New York State, lynx disappeared in the late nineteenth century as a result of logging, trapping and hunting. Approximately 25 years ago, biologists attempted to reintroduce 80 lynx into the Adirondacks. The attempt was unsuccessful.  A similar experiment was conducted in Colorado where lynx had also disappeared. This reintroduction was successful and there is now a rising population of lynx in Colorado. However, the Canadian lynx remains a federally threatened species.

Lastly, we’ll talk about black bears (Ursus americanus). Although bears are considered top predators, they are viewed as slightly different than other top predators. Black bears are considered top predators because they themselves do not have any true predators, apart from humans. However, bears are omnivores, whereas the other species mentioned are carnivores (meat eaters). Mountain lions, bobcats, lynx, wolves and coyotes survive on a diet of smaller animals (carnivore = meat eater). In contrast, black bears mainly eat grasses, roots, berries, and insects. They will occasionally eat fish, dead animals (carrion) and other small mammals. Over the past few years bears have also developed an appetite for garbage. The bear population in New Yorkn consists of approximately 6,000-8,000 individual bears in designated hunting areas, 50-60% of which live in the Adirondack region. 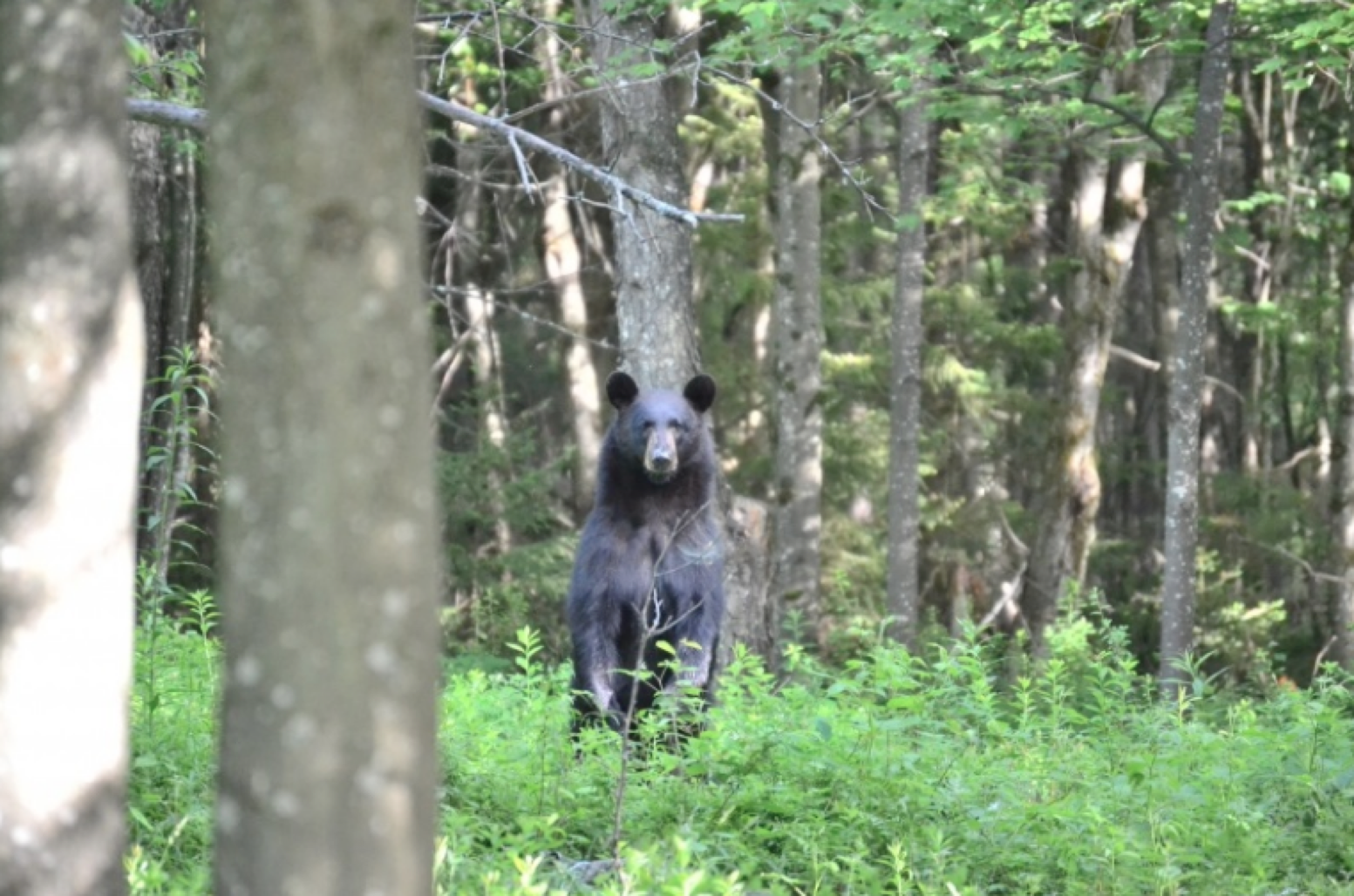 With such a large population it is almost unavoidable that there will be the occasional interaction between bears and humans, especially if us humans leave out yummy garbage! Understandably, seeing a large black bear up close may be frightening for you. However, it's definitely frightening for the bear too and it will usually run away as soon as it sees you. It is important to properly dispose of trash in order to avoid these interactions.  Bears are opportunistic feeders, meaning that if they can easily find food somewhere they will remember that place and return frequently. when bears are in constant contact with humans some lose their fear of humans, leading to even bigger problems. Habituated bears (those not afraid of humans) will go to greater lengths to obtain food. There have even been instances where bears have taken food right out of a person’s hand. We do not want this as it creates human-bear conflicts. Often these bears fall victim to being killed by cars or shot illegally by residents as people fear for their safety. It is illegal to intentionally feed black bears. Additionally, accidentally or indirectly feeding black bears is also illegal after receiving a written warning.

Now that we know who lives here and who doesn’t, let’s talk about how large predators contribute to a healthy ecosystem. What is a healthy ecosystem? An ecosystem is made up of plants, animals and all other living things interacting with each other and their environment. In a healthy ecosystem, there are many species interacting with one another. However, the removal of species from the ecosystem can disrupt the entire system. Top predators play an irreplaceable role and are essential for ecosystem health. Top predators control prey species by removing weak members. Without large predators, prey species populations explode.  Today in some regions of New York we have expansive deer populations. Some argue that hunters fill the role of top predator. However, without a thriving population of cougars or wolves, hunters alone cannot manage deer populations. Large predators are vital to the long-term sustainability of ecosystems in northern New York. 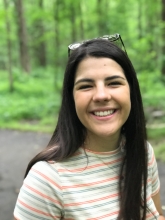 Abby is a graduating senior studying Conservation Biology at St. Lawrence University. She discovered her love for nature growing up in a small town in southern California just outside Joshua Tree National Park and takes every opportunity to get outside. She is happiest outside doing yoga, hiking, and exploring nature through the viewfinder of a camera. As a digital media intern at Nature Up North, Abby has enjoyed sharing her love of nature through photography.

Wow! What a shame

It's such a shame to see that so many of our top predators, which have made up such a significant part of our natural heritage, disappear and probably never return.