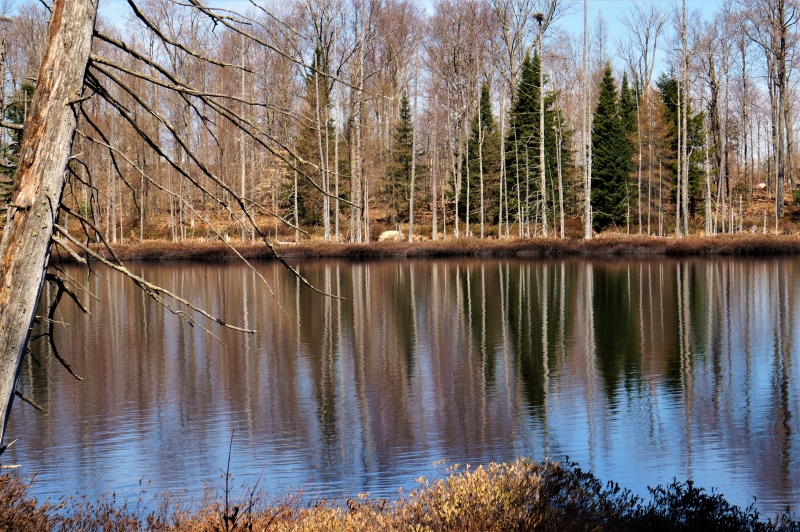 As many anglers know, trees and trout are closely related. Not in a family sense, of course. And not like the way in which tomatoes and fish were briefly married in a 1996 experiment at Oakland, California-based DNA Plant Technology in an attempt to get a frost-tolerant tomato (or possibly a saucy fish). If it weren’t for tree cover, cold-water fish species would not survive in most of the streams they now inhabit.

Forests provide us with many “ecosystem services.” While the term sounds like you can call up Ecosystem Services when camping and order wine delivered to your tent, these services, or gifts, range from the sublime (aesthetic beauty) to the mundane (dollar value of tourism).

They also include essential things like the production of oxygen and the removal of airborne particulates. The impact of extreme storm events is dampened by forests in many ways. The canopy reduces the force at which rain hits the ground, which leads to less water running over the land, and more of it seeping into the groundwater. Canopy shade makes the winter snowpack melt slowly, reducing the risk of downstream flooding.

Limiting overland flow prevents erosion and keeps sediment out of waterways, but the benefits go well beyond that. When more rain and snowmelt end up as groundwater, as opposed to running off into surface water, it leads to much colder stream temperatures. A dense canopy also helps keep water cool along the length of its course.

This makes fish happier because they can breathe easier. By way of explanation, anyone who has opened a carbonated drink knows that gasses certainly will dissolve in liquid. A near-freezing seltzer bottle can be opened safely because cold water holds dissolved gas a lot better. Put the same bottle on the dashboard in the sun for an hour, though, and it will spray all over when you crack the top because the gas is in a hurry to come out of solution.

The same principle holds true for dissolved oxygen in streams. Humans and other land species have the luxury of wallowing around in an oxygen-rich environment: about 21% of the Earth’s atmosphere is made of this important molecule. The Occupational Safety & Health Administration (OSHA) states that rescue personnel must wear self-contained breathing apparatus if a site measures below 19.5%. Some people get woozy at 19% O2 and death occurs at around 6% oxygen.

The highest possible concentration of dissolved oxygen (DO) in water is 14.6 parts per million at a temperature of 0.1 C or 32.2 F. To put this in perspective, the best a fish can hope for is 0.00146% oxygen in wicked-cold water. In general, trout and other salmonids need a minimum DO of 9 to 10 ppm, but can survive in as little as 7 ppm in water colder than 10 C (50 F). Trout eggs are even more fastidious, becoming if the DO drops below 9 ppm even in frigid water.

Forests do more than keep sediment out of, and a chill in, streams and rivers. They donate wood, which is a lot more important to healthy waterways than it sounds. In fact, in some areas where forests have been degraded or clear-cut, landowners are paid to install logs in streams to improve habitat. Fallen trees occasionally block a waterway and change its course, which may be stressful to organisms on a temporary and localized basis. But the vast majority of limbs and trunks which end up in streams help provide habitat for fish, as well as the things they eat. A partial or complete log barrier acts as a pool-digger, creating deep, cold sanctuaries. It helps wash gravel, making it more conducive to stonefly, mayfly and caddisfly nymphs (juveniles).

Anyone who owns a couple of acres or more of wooded land can help preserve or improve its health by getting a forest-management plan. This can be done by hiring a private forester, or through the New York state Department of Environmental Conservation (NYSDEC).

Timber harvests can be perfectly compatible with forest health, so long as they are conducted in accordance with your management plan, and are overseen by a professional forester. In fact, not only are sustainable timber harvests better for fish, they net the landowner far more income in the long term. All the while, those well-managed forests are able to maintain those critical ecosystem services on which we depend. Minus the tent-side wine delivery of course.

wow! I didn't know that…

wow! I didn't know that trees had such an important impact on trout!