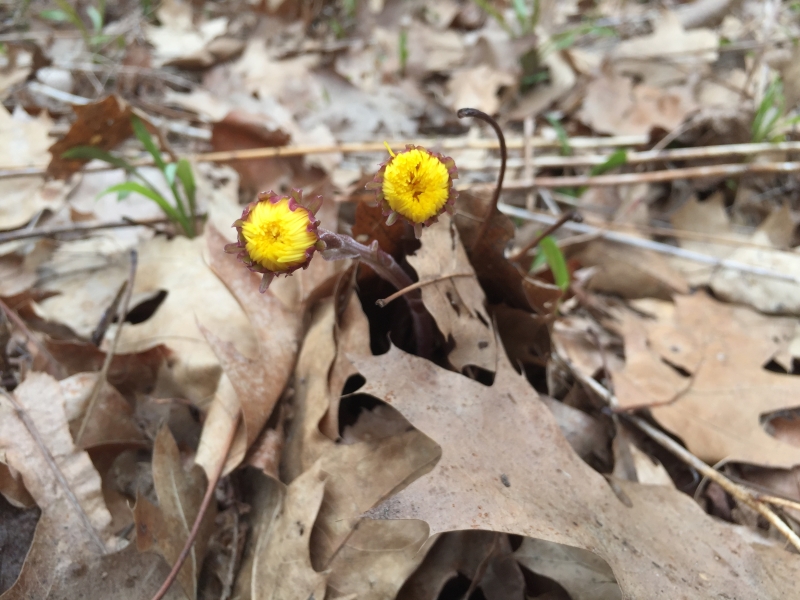 Coltsfoot flowers look like small dandelions, but they bloom before the leaves have formed each spring.

I haven’t checked with an optometrist, but I may have a winter-related vision problem. When five or six months of winter-white finally give way to a mostly brown world each early spring, my eyeballs hurt—they ache for something bright in the landscape. That’s probably why I plant a few additional crocus bulbs in the yard every fall, and why I search wooded areas for early-blooming native wildflowers like bloodroot and Carolina spring beauty.

But what thrills me most is how clumps of bright yellow coltsfoot flowers emerge, long before their leaves come out, from muddy roadside ditches, rail embankments and other places with a history of soil disturbance. Coltsfoot is native to Europe and Asia, but has naturalized throughout North America. Its flowers look like small dandelions, but without leaves. Maybe it’s the contrast between their color and the sepia environs, or perhaps it’s their audacity at blooming so early, but these little sunbursts go a long way toward dispelling my winter fatigue.

Many non-native plants came here accidentally, but coltsfoot was likely planted by early settlers because of its history as a medicinal plant. We don’t know if coltsfoot cheered up European settlers when the snow melted, but we do know that they used it to treat coughs and colds during winter’s icy grip.

Its botanical species name is Tussilago, derived from the Latin word for cough. Its common name comes from the fact that its leaves, which emerge as the flowers die back, have a shape similar to a horse’s hoof.

Pliny the Elder (think Socrates, but Roman instead of Greek and slightly less ancient) treated his asthma by inhaling the smoke of dried coltsfoot leaves and flowers. In an ironic and tragic twist, Pliny died of smoke inhalation during the eruption of Mount Vesuvius.

There was a period of time in Europe when the coltsfoot blossom was the symbol for an apothecary, the yellow flowers virtually synonymous with healing. And following a tradition that dates back thousands of years, some Chinese today still use commercial cough syrups made with coltsfoot.

Just because something is all-natural doesn’t mean it’s all-benign. The truth is that herbal remedies are nothing to sneeze at. Consider digitalis, quinine and THC, potent drugs that come from plants. Because the active ingredients in herbal medicine can interact with prescription medications or exacerbate health conditions, no herbal remedy should ever be used without first consulting a licensed medical professional.

In fact there is concern about the safety of coltsfoot in some quarters. In a 1999 University of Iowa study, researchers documented an increase in liver cancer among rats ingesting large doses of coltsfoot. However, because the Iowa study concluded coltsfoot’s health risk was due to one particular compound that it (the plant, not the study) contained, some German researchers are working to develop a strain that’s free of the chemical.

Making coltsfoot into cough syrup requires supervision, but using it as a tonic for the spirit need not involve doctors. I encourage everyone to check out these splashy early-blooming flowers. You can’t overdose on eye candy.