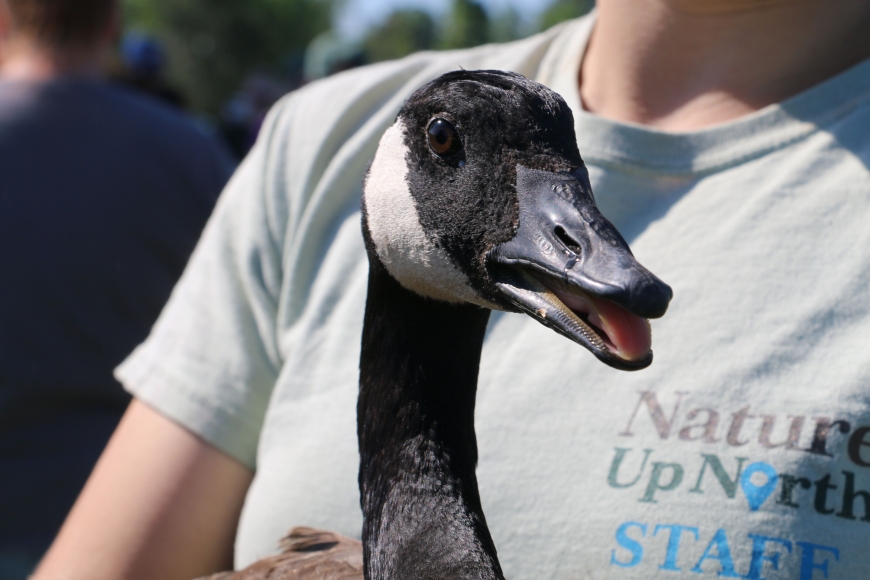 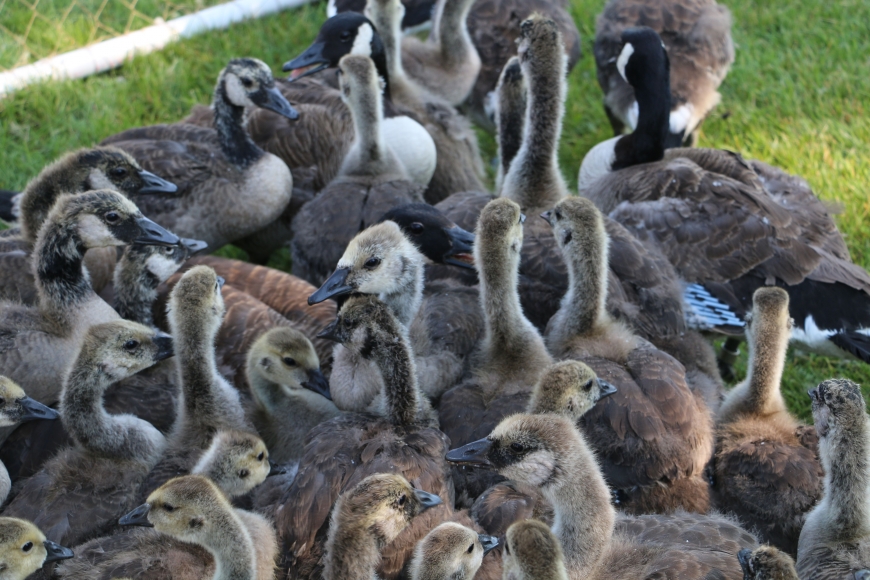 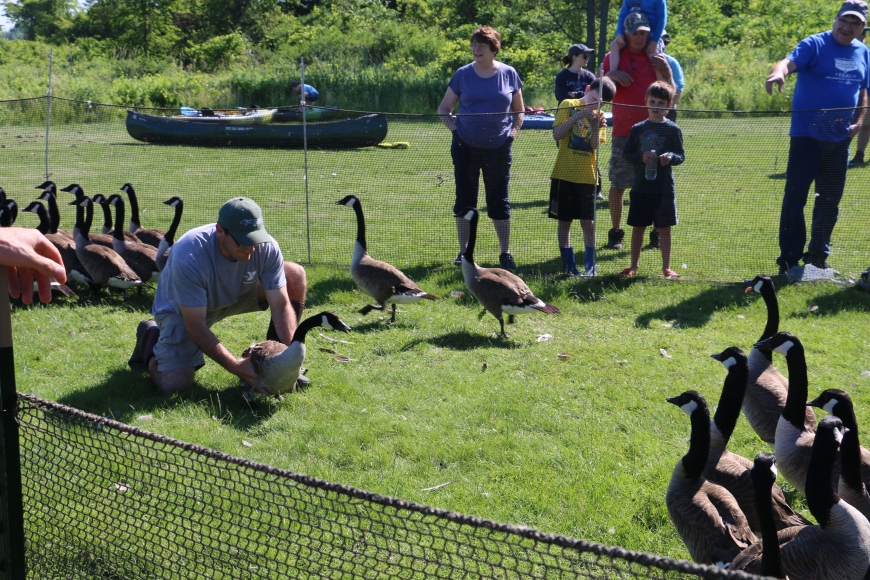 Photo: Adult goose on the way to banding, held by Emlyn Crocker of Nature Up North

Photo: Goslings in their isolated pen, just before being released.

Photo: A DEC member "wrangles" a goose for tagging.

The Canadian goose population began to decline in the 1970s due to increased harvesting. However, long-term efforts from our dedicated local Department of Environmental Conservation (DEC) are successfully reversing the decline.

In late June each year, the DEC invites community members of all ages to help with the sexing, tagging, and of course, wrangling of Canadian geese at several Wildlife Management Areas along the St. Lawrence River. Tagging geese allows the DEC to collect biological data to better protect their populations. In 2016, Nature Up North volunteered at the Wilson Hill Goose Drive at the Wilson Hill boat launch in Massena, and we happily returned this year on June 27th to wrangle geese once again.

We left for Massena early in the morning with two canoes strapped to our cars, ready to help with the initial stage of the roundup - the herding. Participants paddled out onto the St. Lawrence River and eagerly awaited the arrival of the birds. We remained close to the shoreline, creating an open path for the geese to swim through - one that wouldn’t crowd or intimidate them as they followed a natural route to land. As they approached we moved in closer, guiding the geese into an enclosed area on the shore where the tagging would commence.

Photo: The herding of the geese begins on the open water and ends here, at the corral.

With the help of community volunteers, the DEC removed the goslings from the initial area into a smaller pen to isolate them. Staff banded the little ones first and released them quickly, chaperoned by a few adult geese. Members of our Nature Up North team held one of the tinier goslings, who was most certainly a fluffy highlight of the day! 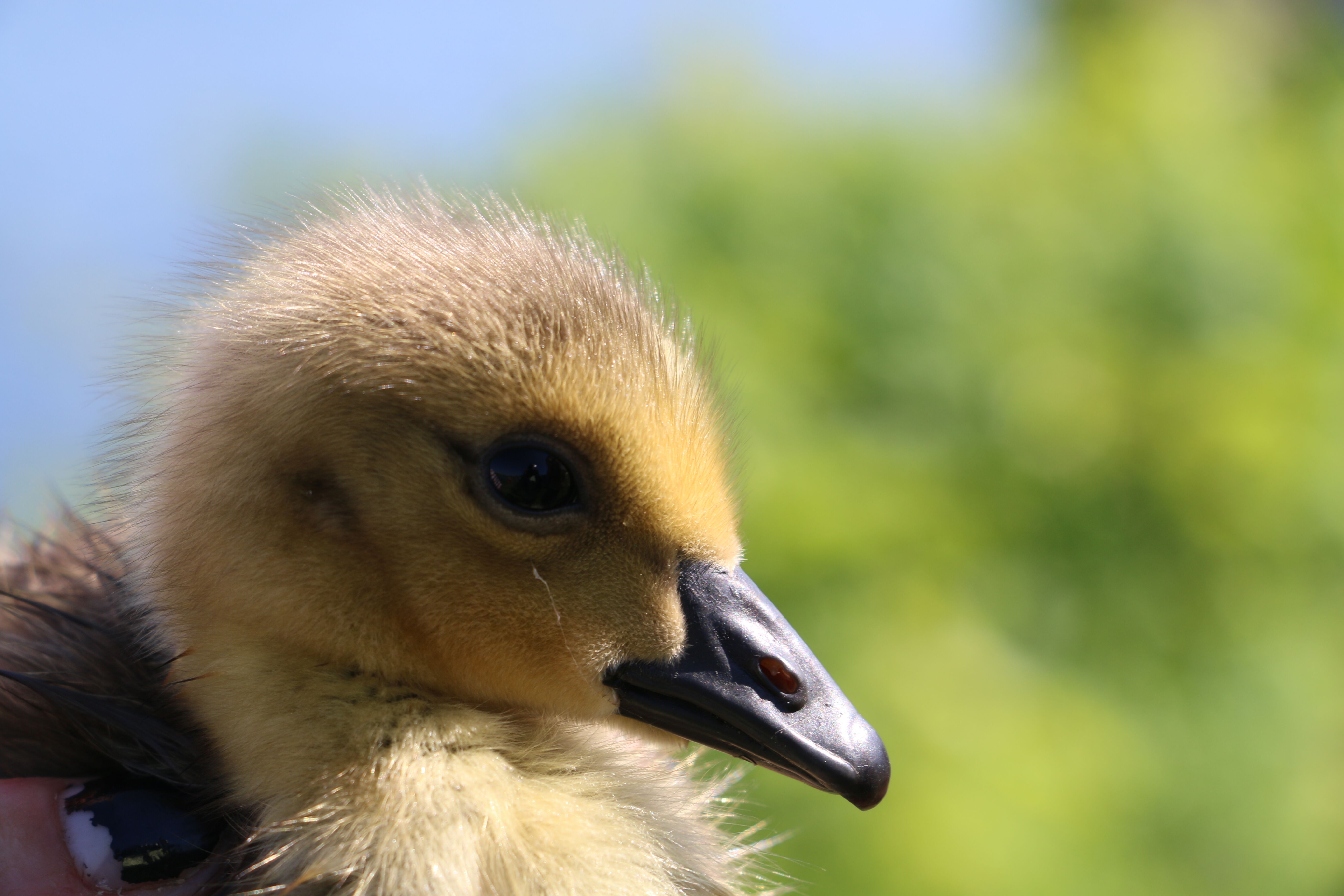 Photo: Fluffy gosling posing for a photo before returning to the river.

Why don’t the geese fly away?

By this time of year, geese have molted their flying feathers, prohibiting an airborne escape. There was, however, one escapee whose flying feathers remained, and he took off just as the flock arrived at the shore. The rest of the geese were successfully sexed and tagged. The timing of this event is crucial – within four weeks, these geese will regrow their feathers and be able to fly once again.

To begin the process of tagging, a goose is handled by its wings and brought to a DEC staff member to be aged, sexed, and banded. In this moment, the word wrangle is fitting as the geese, often as large as some of the children holding them, are feisty and looking for a way to bolt.

Photo: Many kids had up-close-encounters with geese -  helping carry them to a station for banding.

Despite confusion and aggression of the geese, the excitement is not lost on anyone. It is thoroughly intriguing to see geese up close—close enough to notice even the smallest of details including the tooth-like serrations on their tongues. The geese are not injured during the wrangle, but the exhaustive process does cause some stress. We learned that it is important to handle them gently and give them adequate space and respect once they are released.

Get involved with geese

The annual Wilson Hill Goose drive provides important biological data and an atmosphere of exploration for students and volunteers. Helping collect hands-on data and interacting with geese inspired us to learn more - and very likely inspired a few kids to consider new career possibilities. Experiencing these impressive birds up close, we are reminded of the important part they play in the natural world, as well as our own.

To learn more about this annual event and to get involved with the DEC, visit https://www.dec.ny.gov/animals/7102.html

Maybe next year we’ll see you there!

What did the goose say to the comedian? ...nothing, he just gaggled. 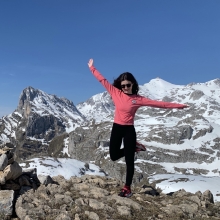 Lydia, from Syracuse, New York, is a summer naturalist intern at Nature Up North. She is currently a senior at St. Lawrence University studying biology and Spanish. When not attending school, Lydia enjoys spending time outdoors hiking, swimming, and learning about the environment!