A North Country Turtle in Trouble 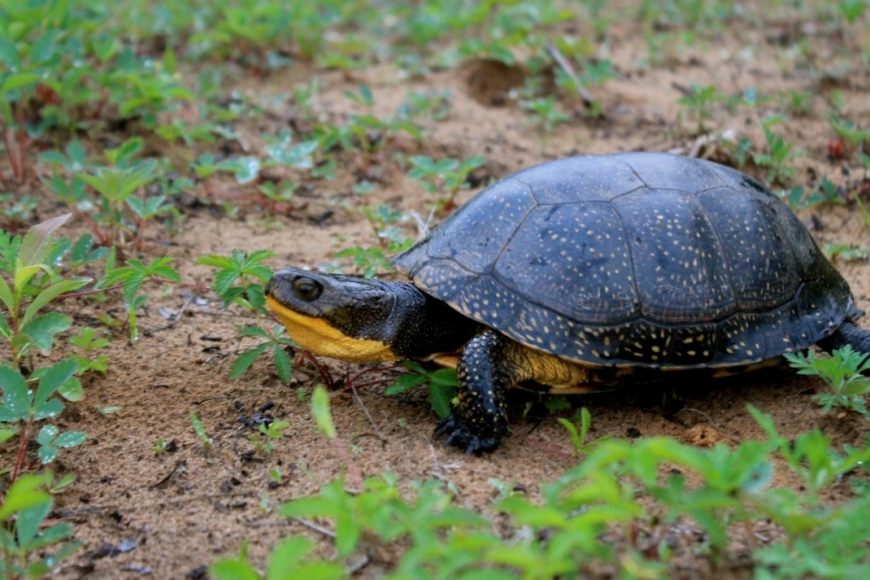 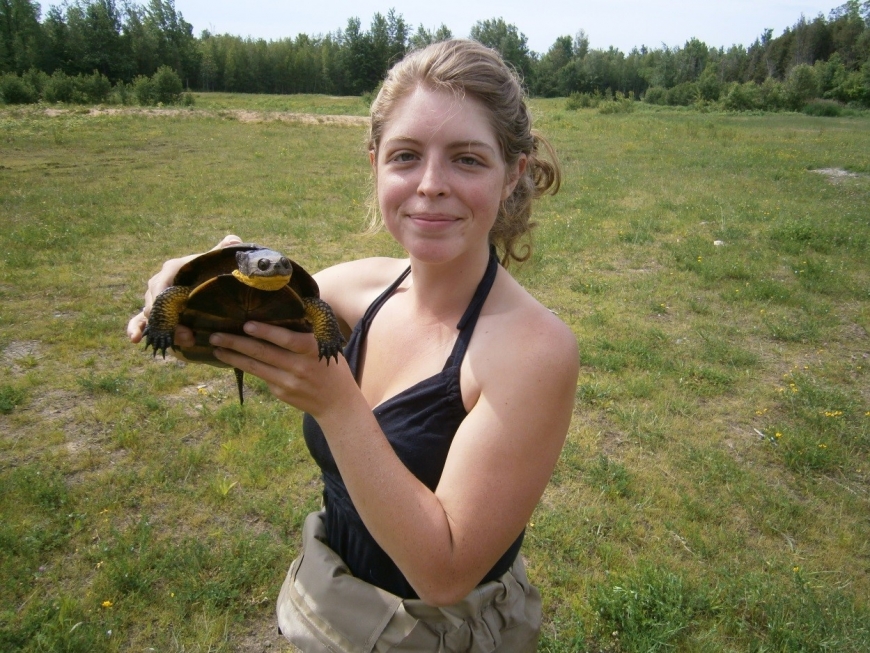 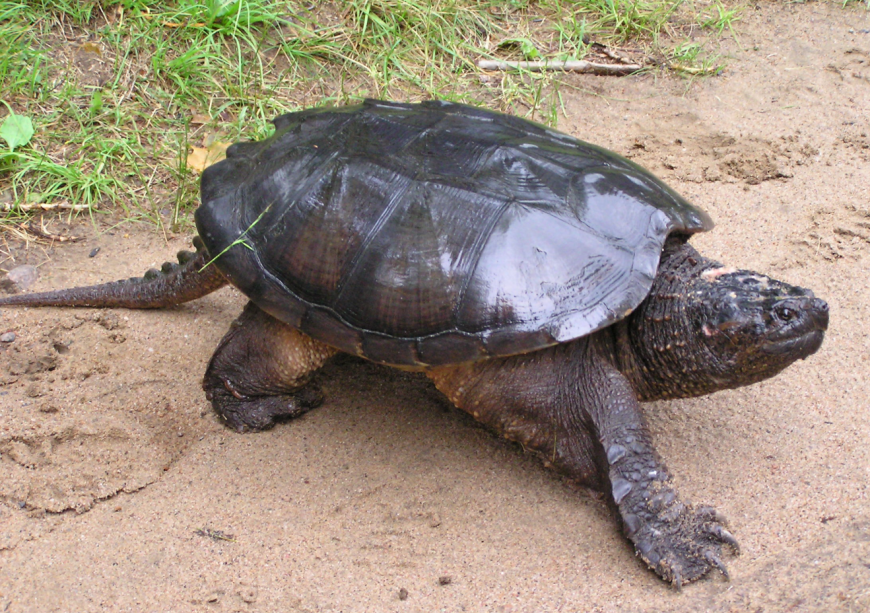 SUNY Potsdam student Rebecca Cruz with a Blanding’s turtle captured after nesting in the field behind her. Photo: Jonathan Ashley.

A North Country Turtle in Trouble

Perhaps due to their iconic shells, great longevity, and slow movements, turtles form an assemblage of about 320 species that are instantly recognized and often loved, by nearly everyone.  However, according to the International Union for the Conservation of Nature, turtles as a group are declining worldwide, faster than nearly every other vertebrate group.  Threats include widespread habitat loss, exploitation for food and for the pet trade, and fragmentation of habitats by roads and agricultural fields.

New York State is home to about 12 species of native turtles, excluding the sea turtles sometimes found in our waters.  Of these, seven may be found in and around the North Country and one, the Blanding’s turtle, is perhaps the most special and clearly the most threatened.  They are imperiled for two compelling reasons.  First, Blanding’s turtles, like many other species, are very slow to replace themselves within their populations.  Females do not become sexually mature until they reach about 20 years of age, their clutch size is lower than other similarly-sized turtles and up to 90% of the nests they make are either destroyed by predators such as skunks and raccoons or are placed in agricultural fields where the eggs get shaded out as the summer progresses and the corn grows high.

The second reason is related to the way they move about the landscape. These turtles spend most of their time in the pools and channels found in wetlands dominated by shrubs, such as willow and buttonbush.  It is those places that they look for their fish, snail and insect prey and seek out each other during the spring mating season.  They also spend the northern winters in these wetlands, burrowed down in the soft muck under the shrub hummocks.  While many of these kinds of wetlands have been drained and filled in since Europeans began to settle in the region, today most of these are now largely protected, thanks to conservation organizations like land trusts.

The problem for Blanding’s turtles is that the females must leave the wetlands in early summer to seek open sandy areas to deposit their eggs.  Recent studies have shown that males and young individuals also spend significant time wandering across the countryside as well.  These movements very often put them in harm’s way as roads have fragmented the landscape.  Given a reproductive strategy where it takes a female Blanding’s turtle a lifetime to replace herself, an early death along a highway can lead to a rapid extinction of local populations. 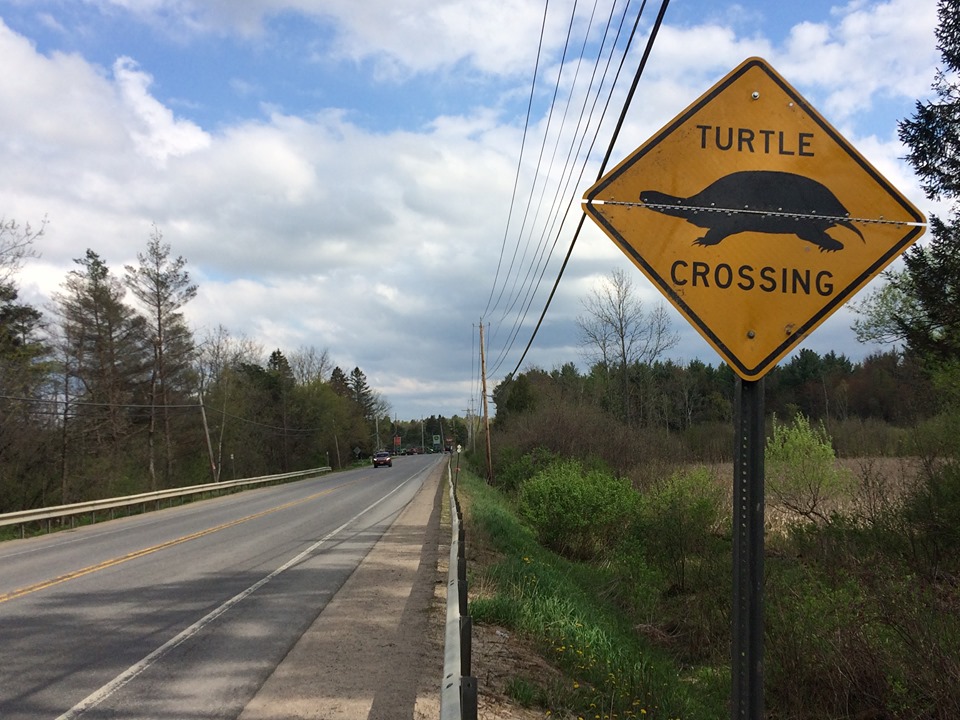 Turtle crossing road signs like this one on County Route 27 in Canton are put up seasonally. Photo: Emlyn Crocker

Recognizing a Blanding’s turtle is fairly easy however, it is sometimes easy to confuse them with other species found in the St. Lawrence River Plains region.  Snapping turtles get much larger, have no yellow chin, and the upper shell often shows a keel while the back of the shell is saw-toothed.  Painted turtles are flatter than the Blanding’s and have yellow or red stripes on the head, neck and tail.  Some folks call them “sun turtles”. Both may be found in the same areas as Blanding’s turtles and they are both much more common.  Less common in our area are the stinkpot (or common musk turtle, found in most of the Indian River Lakes and shallow bays along the St. Lawrence River), map turtle (look for them in Black Lake or sunning themselves on logs along the St. Lawrence), wood turtles and spotted turtles. 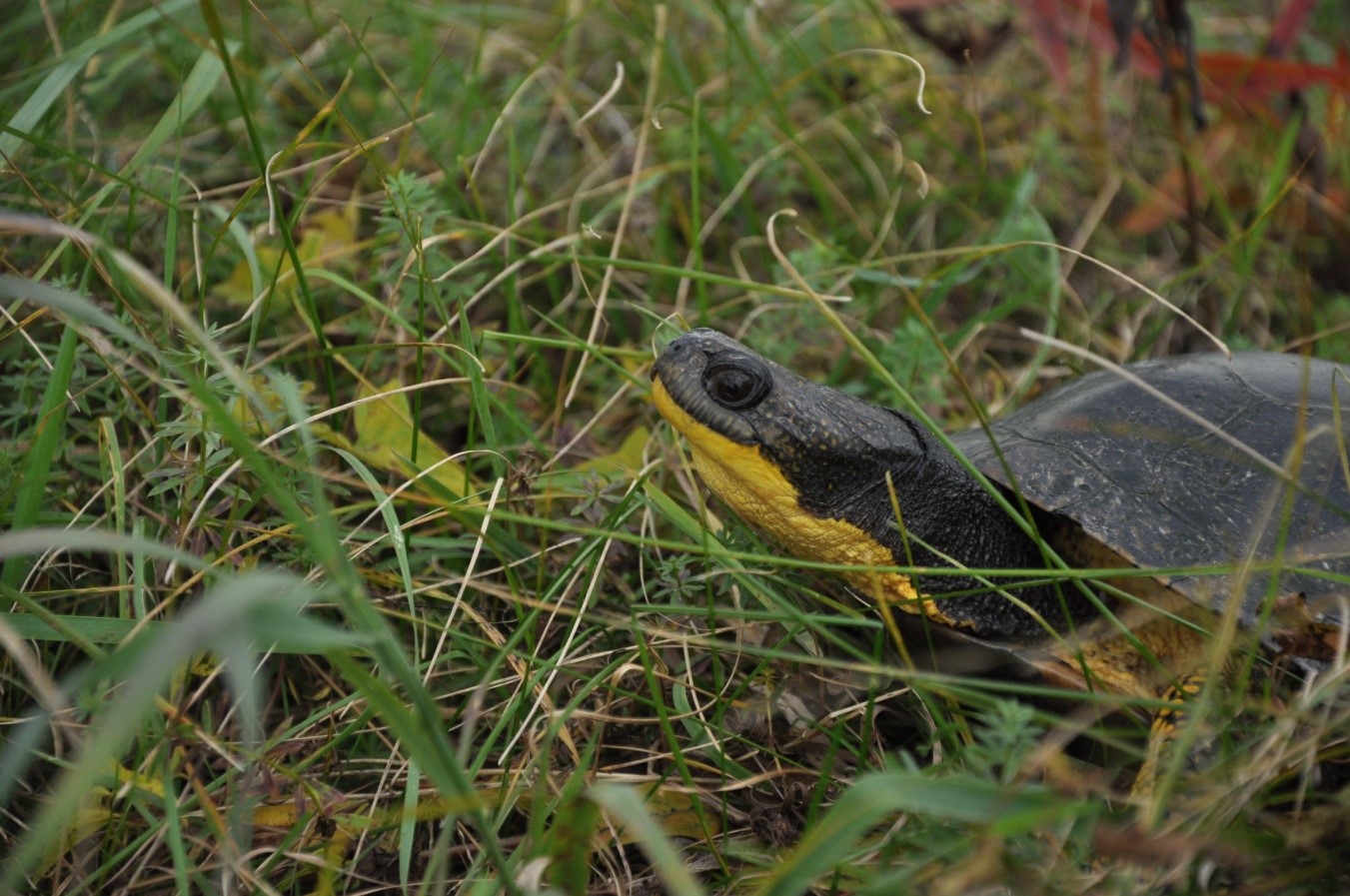 If you have seen a Blandings turtle and can point to a specific location, please consider contacting Dr. Glenn Johnson at johnsong@potsdam.edu with more information. We are very interested in developing a complete map of their distribution within our region!

Glenn Johnson is a professor and Chair of the Biology Department at SUNY Potsdam, where he teaches ecology, conservation biology and vertebrate biology. He is a co-author of the book “The Amphibians and Reptiles of New York State: Identification, Natural History and Conservation”.